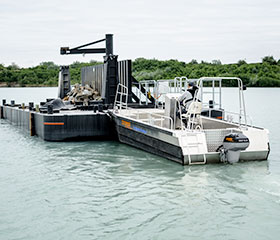 In the field of physics, work is said to occur when a force that is applied to an object causes a displacement of that object in the direction of the force. Going off this definition, the high-power Deep Blue 80 electric motor is a true workhorse.

A workboat equipped with a Deep Blue is used to maneuver barges on the quarry lake Rogau near Frankfurt. Considering that these barges consistently carry over 60 metric tons of gravel, this application impressively demonstrates the unparalleled performance of the high-voltage electric motor.

In order to protect the local groundwater, the gravel quarry Kaspar Weiss decided to equip their workboat with the zero-emissions Deep Blue system. At their Rogau location the quarry yields countless tons of gravel annually. However, this commercial extraction of gravel results in vast amounts of useless byproducts such as sand, mud, clay, and rocks. With the help of a workboat and barge, these byproducts are removed. The Deep Blue powered workboat locks onto the barge to maneuver the 60 tons of unwanted material to the dumping location. In this way the Deep Blue helps remove over 700 tons of material from the Rogau quarry lake each day.

Developed by Torqeedo, the high-power Deep Blue propulsion system is well suited to applications involving heavy loads. Fed with 65 kW of electrical energy, the Deep Blue system achieves a propulsive power equivalent to an 80hp petrol outboard, making it the world’s most powerful electric outboard operating at an efficiency of 54%. As a result, the Deep Blue achieves a static thrust of up to half a ton, which represents performances that were previously unheard of in this category. It is precisely these performance characteristics that allow the Deep Blue to be successful in the quarry application, as a large propeller is need to generate the thrust necessary to move the 60 ton barge. Thanks only to the high torque of the Deep Blue is it possible to use an appropriately large propeller.

The necessary electricity for the Deep Blue is provided by lithium batteries, which store a total of 26kWh of electrical energy. The batteries make use of the latest advancements in automotive lithium battery technology and are adapted to the marine environment. Torqeedo, the global market leader for electric marine propulsion systems, provides a nine year capacity warranty for its batteries. This warranty promises that after nine years of daily use the batteries will still have a capacity in excess of 80% of the original capacity.

The quarry-lake Rodgau is not the only site of commercial use for the Deep Blue. The high-performance system is also employed as a propulsion solution for water-taxis, ferries, patrol boats, and excursion boats.

Raphaël Domjan has an ambitious plan
3,000 kilometres – through the Northwest Passage