The Swedish startup Candela Speed Boat has developed the world’s first electric hydrofoil boat, using motor and batteries from Torqeedo. This could be the dawn of a new era.

The Stockholm archipelago lies beneath a blanket of thick fog, as it often does. Small waves lap against deserted gravel beaches. Days are tranquil here, much like they were 10,000 years ago when the last glaciers retreated and the 30,000 islands that define this landscape emerged from the sea. In recent months, people out fishing or sailing have sighted an unusual object on the water—a streamlined craft jetting around the archipelago. It travels at high speeds, but everyone says it’s quiet. Is it a mirage? A military prototype? Maybe it’s a UFO?

On the island of Lidingö in the Stockholm archipelago, you’ll find the headquarters of Candela Speed Boat. The startup’s engineers, programmers, and mathematicians have spent the last few years bringing the first electric hydrofoil boat to market, the Candela Seven. This speedboat literally flies above the surface of the water at cruising speed, its weight resting on two underwater wings called hydrofoils. Propelled by the Torqeedo Deep Blue 50i, the boat has a top speed of 55 km/h and a range of 92 km when driven at 37 km/h.

“The Candela Seven combines minimum energy consumption with maximum performance,” said Dr Ralf Plieninger, managing director of Torqeedo. Plieninger is in charge of technology and operations at Torqeedo, and he’s excited about what Candela’s success means: “The electric hydrofoil is a game-changer for marine electric mobility.”

Where it all began

The story of the Candela Speed Boat is rooted in the Stockholm archipelago. One day, founder and CEO Gustav Hasselskog got into his gasoline-powered motorboat at his summer house to go to the island supermarket—his kids wanted ice cream. At first, he was shocked how expensive the ice cream was: €2,50! But then he calculated the fuel cost for the round trip: €40 in gasoline. “Get as much ice cream as you want,” he told his children. On the ride back, Hasselskog started thinking about Tesla automobiles. What if you could combine modern electric motors with the hydrofoils that are now standard equipment in competitive sailboat racing? The idea captivated him. But it’s a long journey from an idea to a market-ready product.

Nobody knows that better than the Torqeedo team. Now the world leader in electric drives for watercraft up to 120 feet, Torqeedo was founded for very similar reasons. “Even though we’ve grown a lot since then,” says Plieninger, “we’ve held onto our startup culture. We enjoy solving problems and doing things differently.”

Candela Speed Boat is still a startup in the conventional sense. The company only had three employees in 2017. Now, the staff numbers 35. Many of them have worked at aerospace and technology companies such as Eurocopter, Saab Gripen, and Volvo. “Our company is driven by innovation. We rely on expertise from many fields,” says Alexander Sifvert, Chief Revenue Officer at Candela. “Carbon fibre, hydrodynamics, high voltage technology, mechanical engineering, and of course mathematics.” The Candela team was trying to crack a tough problem. A boat with a length of 7.5 meters consumes 12 to 18 times more fuel than an automobile, which is why it makes ecological and economical sense to switch from gasoline to electric motors. But since most batteries have a lower energy density than gasoline, electric boats must be optimized to have a long range or high speed, but not both. The idea behind their ambitious goal was if we want to establish viable electric transportation on the water, we need to solve the energy problem first.

Machines humming quietly in the background

The Candela Seven is 7.7 meters long and seats six. Its Deep Blue electric motor accelerates the boat smoothly and silently. For the first few meters, it feels like you’re in a very nice, standard boat. But everything changes at 27 km/h—that’s when the craft rises out of the water onto its hydrofoils. “The energy consumption drops 80 per cent in hydrofoil mode—that gives us a range similar to a gasoline engine,” says Hasselskog. The boat runs very smoothly on its hydrofoils - there’s no slamming into waves, and no noise. Torqeedo’s Deep Blue is one of the quietest electric motors in its class—you’re literally flying above the water. There’s no other way to describe the experience.

The Candela Seven rises out of the water on its underwaterfoils at a speed of 27 km/h.

The Candela Seven’s design is based on insights from the field of aeronautics. The hull and deck are made of carbon fibre and weighs 180 kg. At a total weight of 1300 kg, the Candela Seven is thirty per cent lighter than a conventional fibreglass boat. “Water forms a complex surface, which is why a lot of boats don’t run smoothly,” says Alexander Sifvert. “The biggest challenge was keeping the boat stable in hydrofoil mode. That required a whole lot of math, fluid dynamics simulations, and mechanical engineering.” Candela has developed a ‘flight control’ system with multiple sensors that supply it with GPS, sonar, and engine data. The system then mechanically adjusts the main and aft foils on the fly. This keeps the boat steady in heavy waves or during sharp turns. And if you’re travelling through shallow water, the hydrofoils retract by tapping the touch screen.

Torqeedo has been working with the Swedish startup since the prototype phase, supplying a custom Deep Blue 50i drivetrain. “The Deep Blue is extremely quiet, and you can cool it with seawater because the cooling tubes are stainless steel,” explains Alexander Sifvert. The electric motor of the Candela Seven has a slender gearbox and delivers instant torque.

“We always try to adapt our technology to the needs of our customers and partners,” says Plieninger. “We made our systems more open for the Candela Seven project.” Electric vehicles require a high degree of software expertise. At Torqeedo, coding can consume more than 50 per cent of total development time. But the electric hydrofoil presented a unique challenge. “Our Deep Blue Motor needed to communicate with the boat’s flight control system,” says Plieninger. “And we needed to modify our protocols, working very closely with the Candela engineers.” 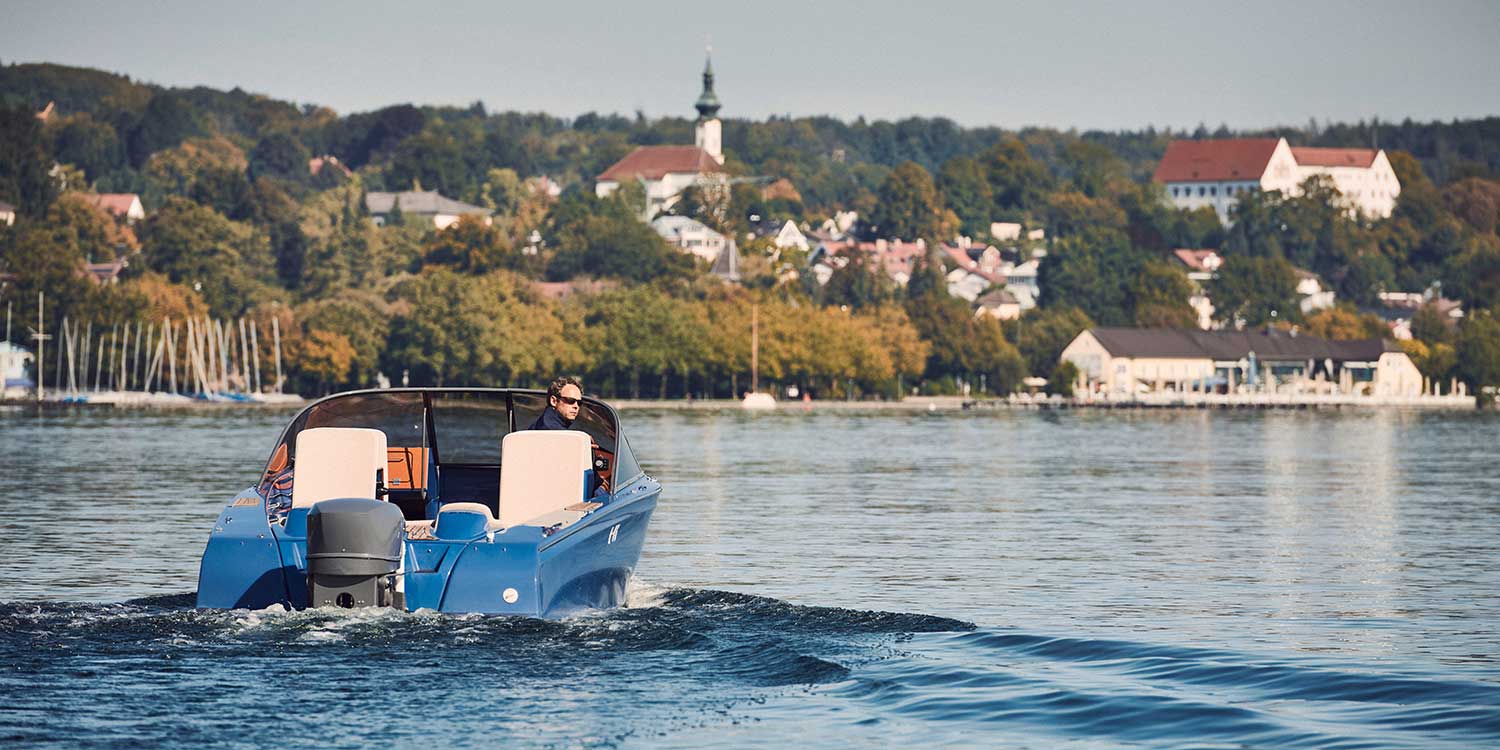 Torqeedo supplies the custom Deep Blue 50i drivetrain, which is coupled to a Deep Blue lithium battery pack, for the Candela Seven.

In other words, it is the machines whispering to each other in the background that make the Candela Seven so smooth and quiet.

At a price estimated at around $240,000, the Candela Seven is positioned at the high end of the market. Then again, the price per kilometre to run it is 95 per cent lower than with a gasoline motorboat. And as with every Torqeedo-powered boat, maintenance and total operating costs are significantly reduced. “If we want to change the world, we have to bring this to the mass market,” says Alexander Sifvert. In 2020, the plan is to quadruple production and reduce prices through automation and higher production volumes, according to Hasselskog. Torqeedo also feels that the combination of hydrofoils and electric motors has huge potential. The technology could offer ferry passengers a smoother ride or make rides in ambulance boats smoother and safer, for instance.

Visit at the workshop: This is how the Candela Seven with a Torqeedo Deep Blue 50i is produced.

“We’ve learned a lot by working with Candela. We’re already working on more hydrofoil projects,” said Plieninger. That’s how things work at startups. First, you create new technology. Then, you scale. And if everything worked out as hoped and planned, the world becomes a better place.

A green way into the blue