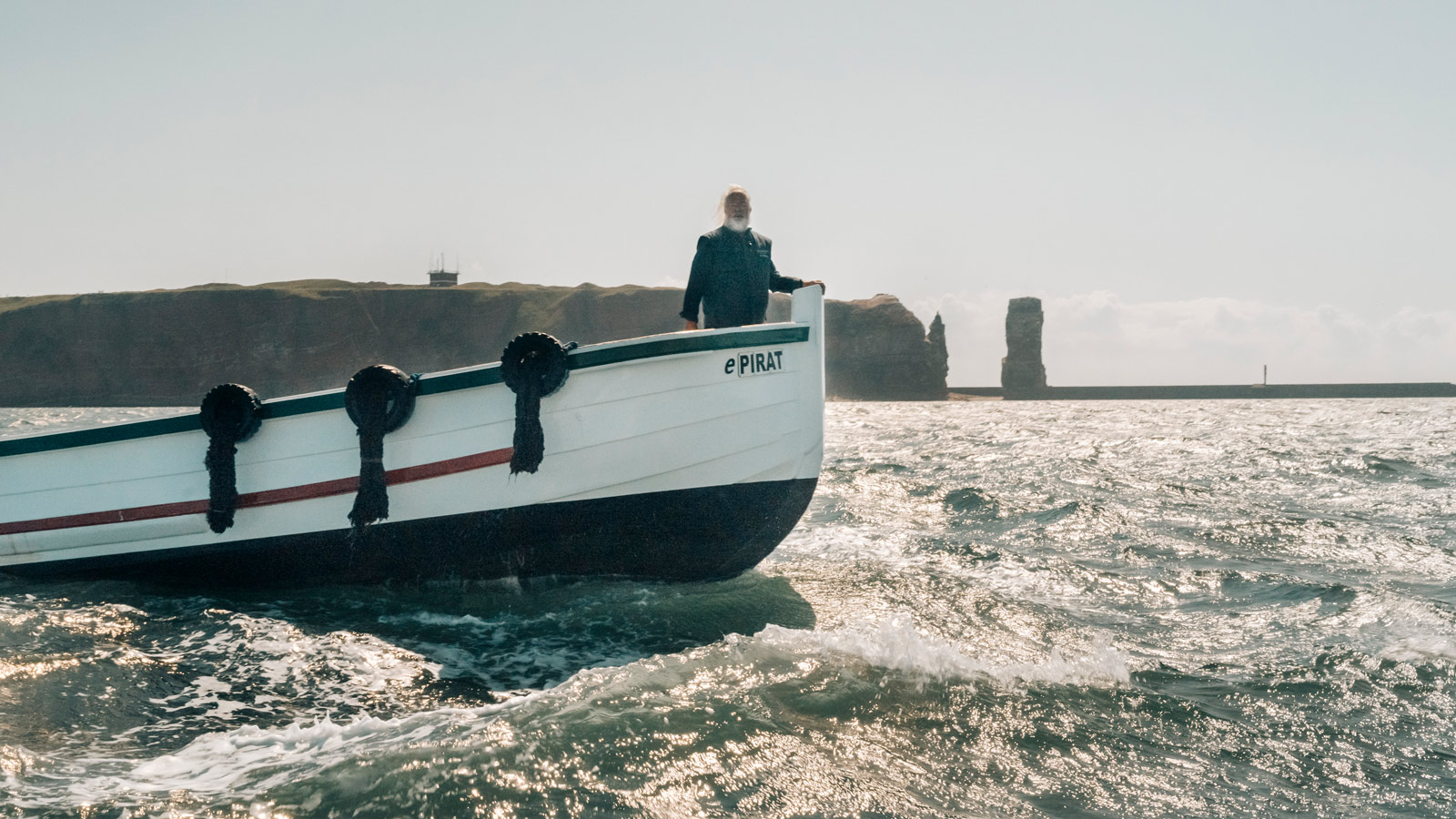 For centuries, people and goods have been transported to the North Sea island of Heligoland in open oaken vessels called Börteboote (boarding boats). As life after the lockdown resumes, the first Börteboot with a Torqeedo electric drive system brings tourists to their holiday destination. But what do the traditionally minded islanders think of this state-of-the-art technology?

Rainer Hatecke has delivered hundreds of boats. He was just six years old when he first sailed from Freiburg on the River Elbe to Heligoland to deliver a new Börteboot. All those years ago, he sat on his grandfather’s lap. Nowadays, the 57-year-old is the fifth generation of his family to run the Elbe boatyard, and he has completed the 100+ km journey to the North Sea island many times. Almost all of the 10-metre, 10-tonne wooden boats which Heligolanders use to transport goods and passengers were built at the Hatecke Boatyard.

Despite that, he almost seems a little nervous as he briefly pops into the Börteboot skippers’ room before setting off on the traditional maiden voyage with the island’s VIPs. With a cigarette in one hand, a coffee cup in the other and behind him a wall full of photos of deceased seamen, he is talking surprisingly fast for someone who is impervious to North Sea winds. What, he seems to be asking himself, will the Heligolanders think of the new Börteboote from his yard?

The Pirat, the Börteboot Rainer had sailed across to Heligoland the day before, was built at his yard in 1962 and had just been given a major overhaul. “I really gave it a good work-over,” he says. New planks replaced rotten ones, joints were sealed, and the Pirat was repainted in the white, green and red colours of the island’s flag, like every other Börteboot. At the stern, he made one fundamental change: the Pirat is the first of over a hundred Börteboots to have an electric motor. Rainer removed the old diesel engine and replaced it with a Torqeedo Deep Blue 50i. The new name on the bows: ePirat. 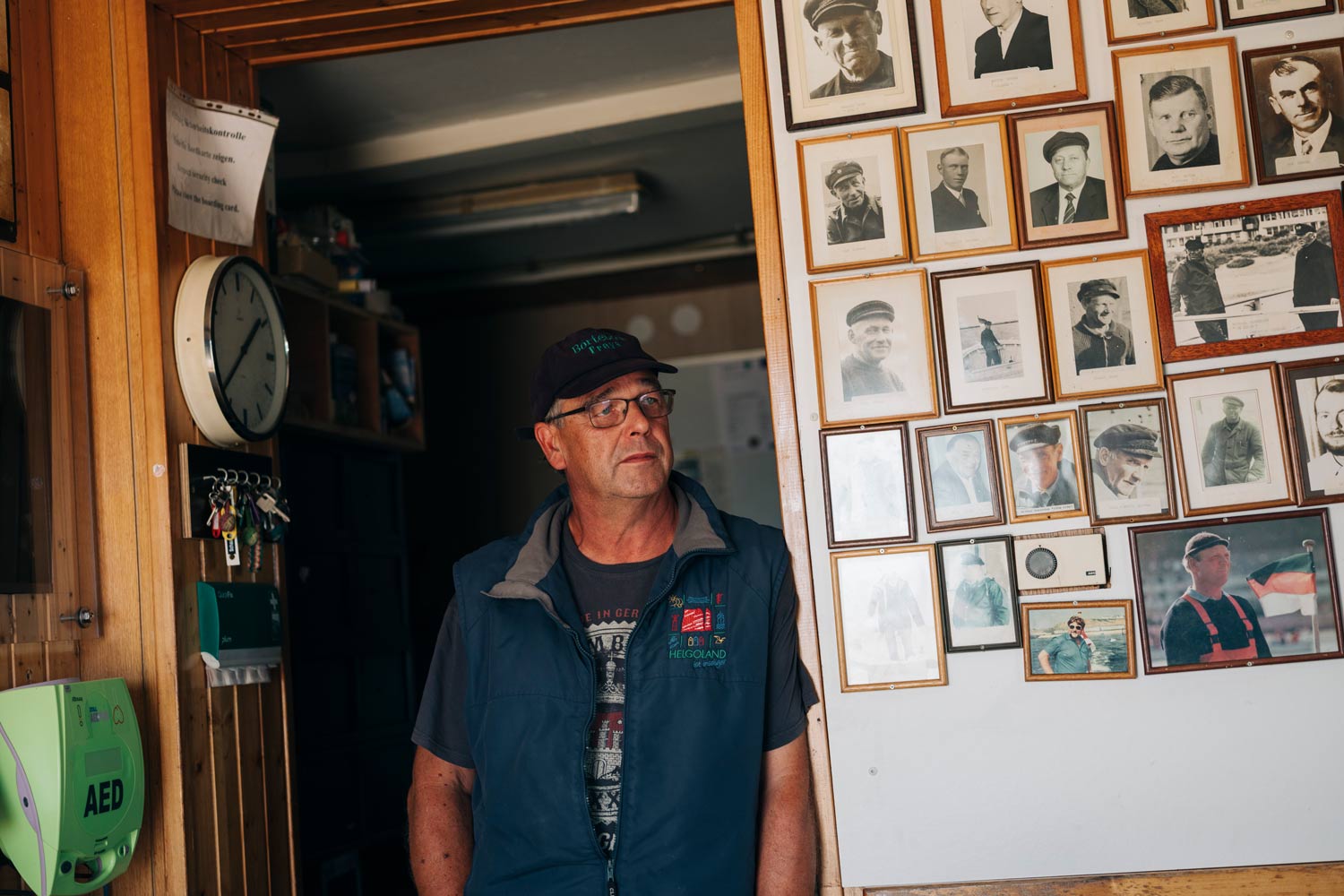 The first time Rainer Hatecke delivered boats to Heligoland he was a six years old and sitting on his grandfather’s lap. In 2019, he built the first electric Börteboot.

How will this go down with traditionally minded islanders? What will they think of this state-of-the-art technology? What will the mayor say? Hatecke is sure that this maiden voyage will be eyed more critically than usual.

Prosperity thanks to offshore wind farms

An electric motor in a boat that is over 50 years old? The story began in 2011, when Jörg Singer, a tanned 53-year-old with gelled, light-grey hair and rectangular glasses, was elected mayor of Heligoland. “Back then, Heligoland was nose-diving fast,” he says. The island’s economy had long relied on tourism, with 800,000 day-trippers arriving each year to buy duty-free alcohol and cigarettes. Then the EU banned pleasure trips and the number of tourists plummeted by more than sixty per cent. Faced with this challenging economic climate, the new mayor decided to look to the future and place his bets on renewable energy. 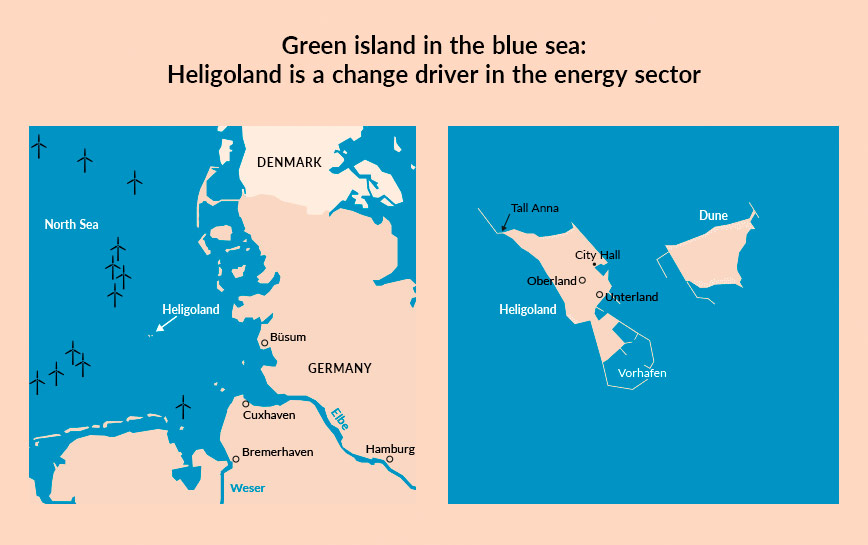 The offshore wind parks around Heligoland produce up to 900 Megawatt of clean energy.

There are now three huge wind farms off the coast of this high-seas community. When wind farm workers rented all the rooms, the Atoll Ocean Resort on the seaside promenade closed down its hotel business. But Mayor Singer sees much more than income stability and a welcome economic boon when he sees the wind turbines on the horizon from the legendary cliffs next to “Lange Anna”.

Over the past 50 years, Mayor Singer says, the water temperature near the island has risen by 1.6° C. Cod have disappeared and commercial fishing is no longer profitable, another hit to the fragile economy. Heligolanders, inspired by Mayor Singer’s vision for the future and feeling the effects of a changing climate, have committed to eliminating the island’s carbon emissions by 2025 in an effort to save their island home. The new sustainability strategy has gone down well with the tourists: in 2018, the island saw nearly 400,000 visitors, an increase of around 30%.

The Börteboot crew picks up tourists from ships that are too large to enter the island’s harbour.

If you listen to conversations onboard the ferries from Hamburg, you soon get the impression that Jörg Singer is doing everything right. You can’t just carry on like in the past, says one lady visiting the island with her husband and grandson. It is vital to save the environment, she adds. A gentleman travelling on his own feels it is a good idea to demonstrate on a small scale how climate goals can be implemented. Maybe that will motivate leading politicians to act more decisively, he adds.

The motto: “Islands for future”

Mayor Singer regularly meets up with island leaders to share ideas and information about sustainability goals. “Islands for future” is the meetings’ motto, a clear reference to Greta Thunberg’s “Fridays for future”. Heligoland’s new police car is electric-powered. On the dunes just off the main island two Wikkle Houses, Dutch mini-bungalows made of cardboard and fully recyclable, were recently built. But Mayor Singer’s decision to have an electric motor fitted to the Pirat may be the mayor’s most symbolic and most daring move yet. 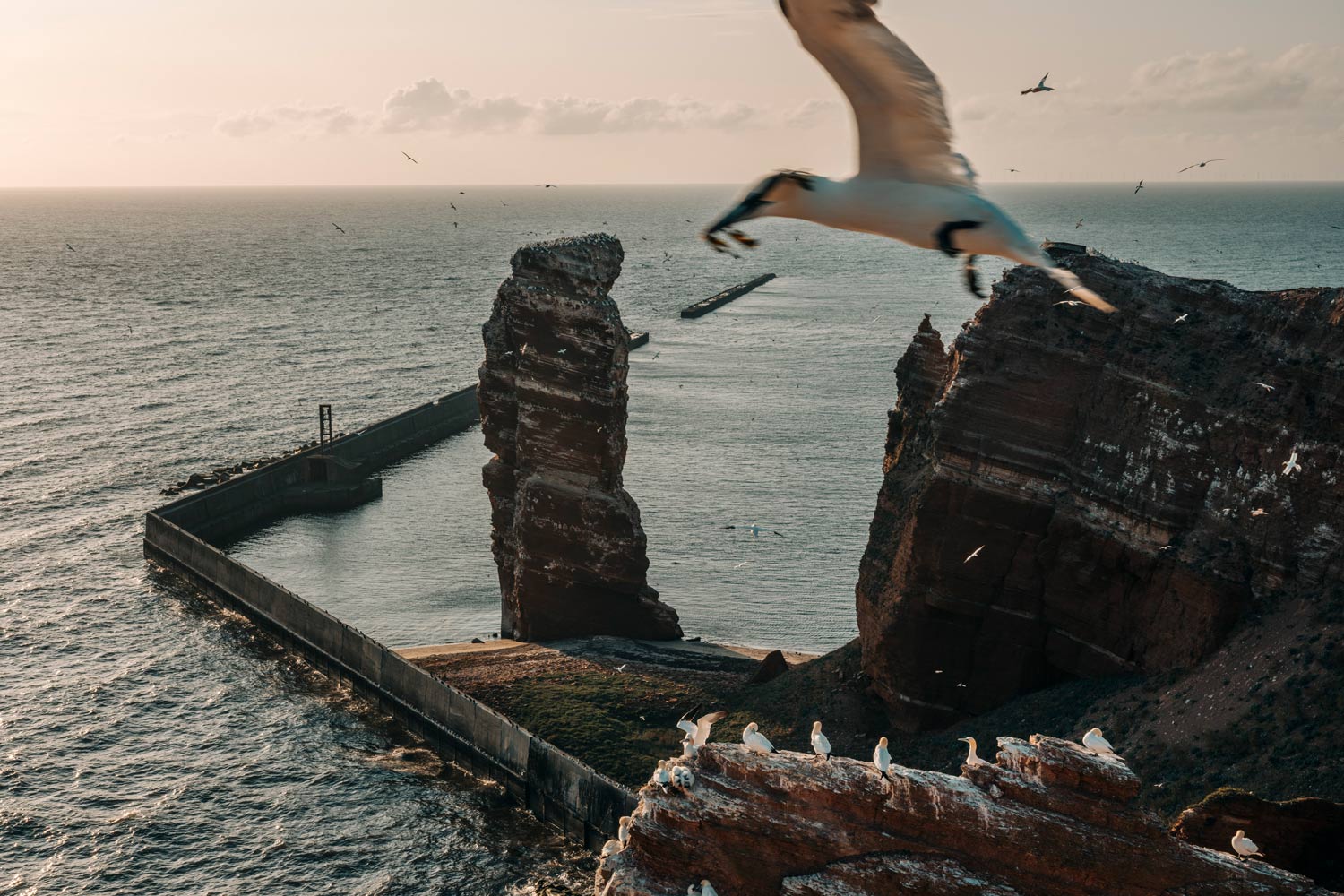 For many people, Heligoland would simply not be Heligoland without the Börteboote, a vital part of the island’s maritime tradition. In December 2018, the Börteboote were recognized as part of Germany’s intangible cultural heritage. Not all of the islanders, or the 15 full-time crew and numerous junior seamen which still earn their livings onboard, are keen on changing anything about these historic vessels.

In the summer months, eight of these boats transport visitors between passenger ships from mainland Germany and the harbour. Börteboote leave the jetty with a four-person crew: an experienced skipper at the tiller and a man in the bows with a grappling hook keeping the boat steady and as close as possible to the ship’s hatch. Two young seamen grab each of the up to 45 passengers under the arms and heave them on board as quickly as possible. For the visitors, it seems great fun - an exciting welcome to Heligoland. But the Börteboot crew knows full well what can go wrong during this manoeuvre. An unexpectedly big wave or one false step and a passenger will fall into the water – or worse still, end up trapped between the boat and the ship. Full concentration is the order of the day. 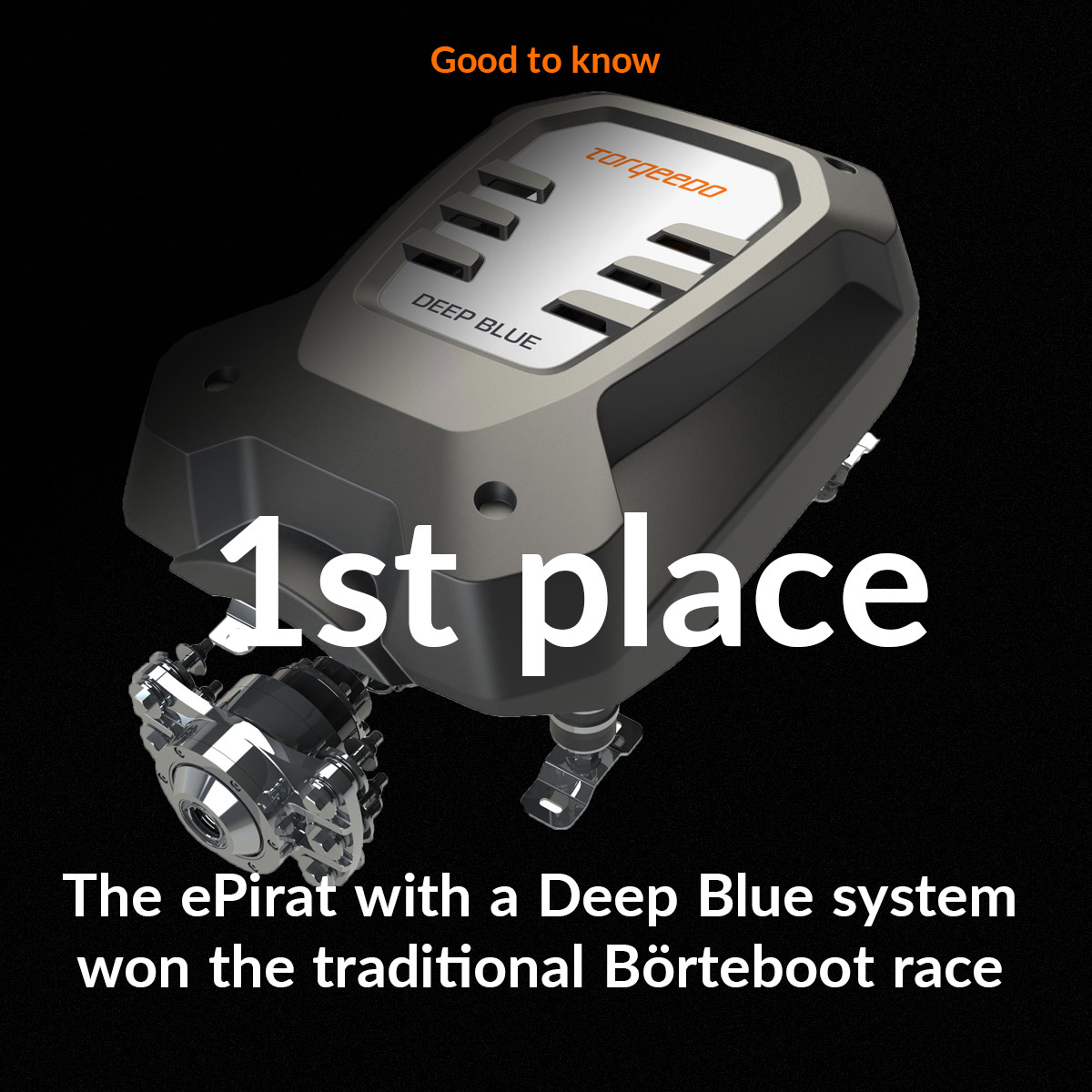 On day one of her return, the ePirat is moored fast and taking on energy via a thick, red-plugged cable instead of transporting tourists. Rainer Hatecke heads out to sea on the maiden voyage with Mayor Singer, Bridge Skipper Bernhard Wellnitz and bushy-bearded Holger Bünning, who leads the junior crewmen.

A different style of boating

Although the ePirat is tossing up and down in the waves, the four men are unperturbed. Rainer Hatecke says about the refit: “It went extremely well.” The diesel engine was removed and replaced with a lightweight electric motor and a battery was installed toward the stern. Rainer left it to the Torqeedo specialists to connect the system with the onboard computer and propeller. He knows all too well how badly saltwater can damage a boat, so the system was extensively tested to be sure everything was 100% ok with the electronics and there were no leaks.

With help from Torqeedo specialists, Rainer Hatecke removed the old diesel engine and replaced it with a lightweight electric motor that powers through the northern waves.

Mayor Singer enthuses about how quiet and odourless the ePirat is – the complete opposite of the stinky old diesel-powered boats. He and Rainer Hatecke agree that the Börteboot crew, which Rainer describes as “real kamikaze skippers”, will learn to drive more efficiently while piloting the emission-free boat. Bridge Skipper Wellnitz, a rose tattooed on one lower arm and a sailing ship on the other, is sceptical whether the 50 kW motor is powerful enough to withstand the strong waves. And he is not the only Börteboot skipper that has doubts. To everyone’s surprise, the ePirat went on to win the traditional Börteboot regatta and will be competing in a higher class next year. 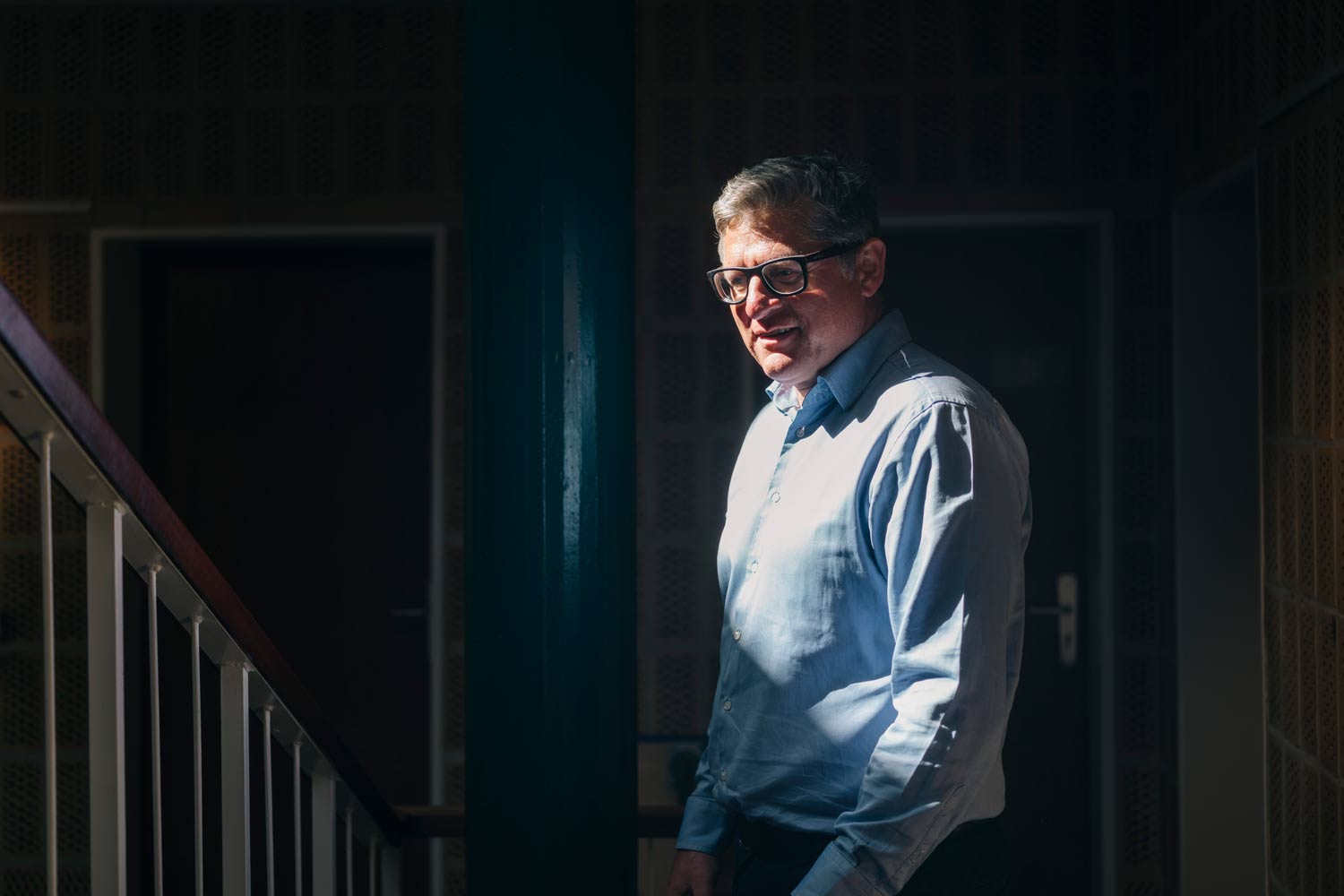 Mayor Singer and Rainer Hatecke are satisfied with the ePirat’s maiden voyage. Seven more Börteboote are scheduled to be refitted in the near future, and they are considering using the electric passenger boats for trips to the smaller islands or birdwatching in the nature reserves. “You know, Börteboote were emission-free for most of their history,” Jörg Singer points out. For centuries they were rowboats, then came the 80-year diesel era. Now, a new age is dawning. 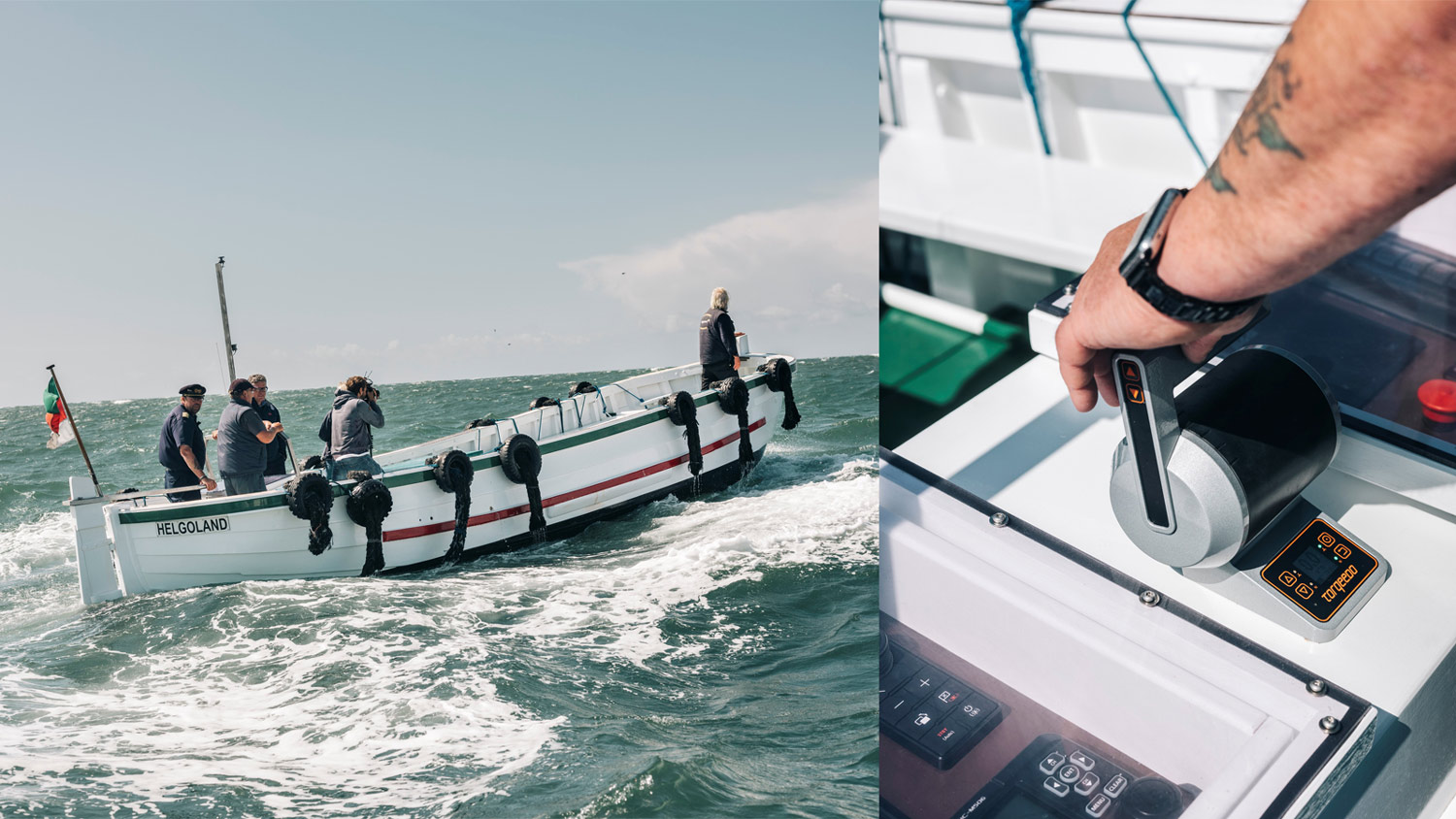 Many young Heligolanders like Jana-Pauline Toben and Lea Claasen are overjoyed. The girls go to the grammar school on the mainland but help with embarking and disembarking visitors during school holidays. “That the Pirat now has an electric motor is really good publicity for our island. It shows how progressive we are,” Jana-Pauline Toben says.

Rainer Hatecke believes that the sceptics will soon be enthusiasts, just like the local girls. When the maiden voyage is over and Rainer is back on dry land, he seems relieved. He will be staying on the island for a couple of days to relax, he adds.

A new way to lift all boats