Susanna Kihl is the founder of Vattenbussen, a Stockholm-based nonprofit that works towards realizing sustainable waterborne public transport in cities and collaborates with the Royal Institute of Technology. Here she explains why we should look to our waterways for new ways to move people and products.

Your research focuses on waterways as a solution for congested cities. How does commuting by boat feel different than by car or subway?

It's calmer: no honking of horns, no aggressive feelings. People gaze out the window and read a paper. It's quite cosy. But comfort is not what I've been focusing on in the past ten years with Vattenbussen. All the people I meet, politicians or business people, start by saying: "Boats are very nice, but they don't have any capacity, do they?" I show them that there is a lot of commuter capacity to be gained by investing in our waterways.

When did you realize the potential of sustainable waterborne transport for the first time?

We live on an island outside Stockholm and there's only one road connecting us to the mainland. The day I had the idea of starting my company, I was sitting in my car trying to pick my two kids up from kindergarten and, as always, the road was very congested. While waiting for the traffic jam, I was looking at the open, unused sea next to the road. I had just heard a speech about the climate issue at work, so on that day, it was like: "I can't do this anymore; there must be another way."

So you wanted to commute more comfortably?

It's about a lot more than that. Most large cities are built near water for a good reason: water was used to transport people and goods. Then we crawled up onto land, invented the combustion engine, and built roads, tunnels, and bridges. But now we have a massive congestion problem, we have urbanization, and we have the climate issue. Within the next 30 years, 70 per cent of the global population will live in cities. But, as their surface area only accounts of around 3 per cent of the globe, city life will be ever more crowded. We need to use all the surface area we can. We need to be able to move, but with real quality of life. We can't just exist in the middle of endless highways. 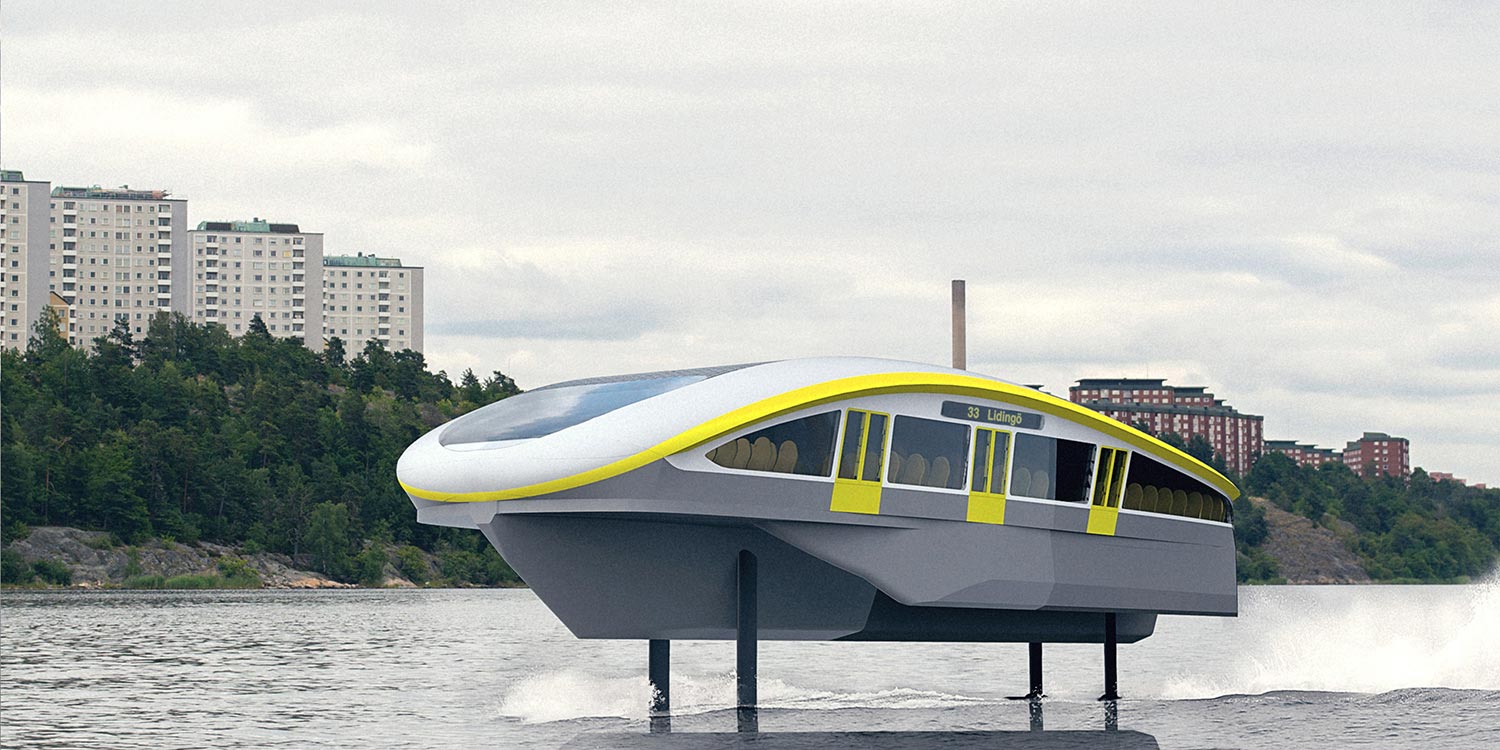 Why is waterborne public transport more environmentally friendly than electric buses or trains?

We look at how much a vehicle emits when we calculate its carbon footprint. But, we never add in how much energy is consumed in building the road or rail infrastructure for that vehicle. Waterways are already there, so you need hardly any energy to make them ready for transport, and maintenance is much cheaper as well. You don't need to repair rivers after a bad storm, or resurface them all the time.

What are the main challenges you face when talking to politicians and stakeholders?

The main misconception is that waterborne transport is dirty, expensive, and doesn't have any capacity.

What can you say to counter those arguments?

Since you started working towards more waterborne transport ten years ago, how have these attitudes changed?

I found that waterborne transport is starting to get more common and advanced. Back in those days, I heard a lot of people saying "No". Now, I think people are curious about waterborne transport. Some cities like Bangkok are even opening up their rivers again. There's also more and more research being done about the benefits of using waterways.

For example, in collaboration with the Swedish Transport Administration, we compared the speed limit on the waterways around Stockholm with the average traffic speed during rush hour in the inner city. On the water you can go at 22 km/h; on the roads it's only an average of 12-15 km/h. 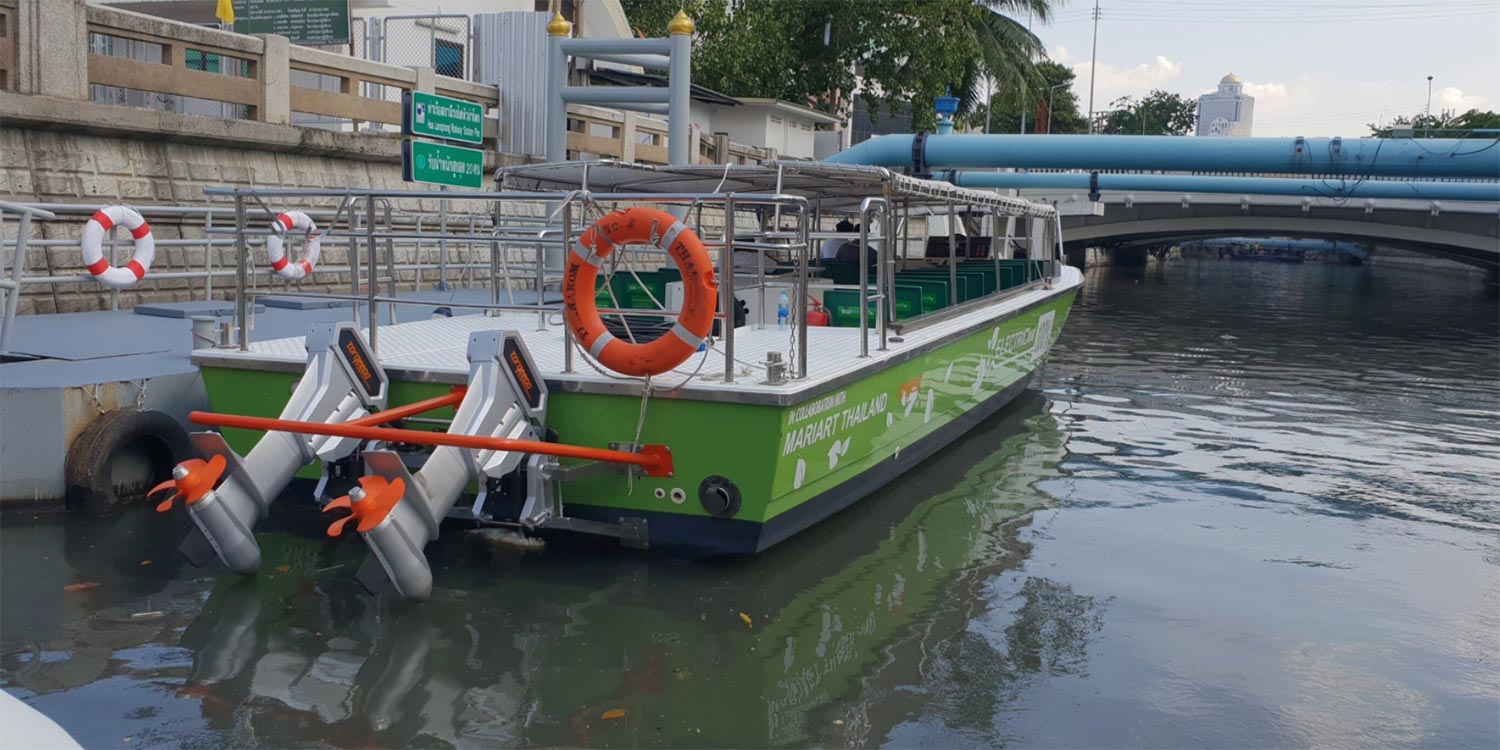 Some cities like Bangkok are opening up their rivers again. There's also more and more research being done about the benefits of using waterways.

Which cities are more or less ahead in using waterborne public transport?

New York, Hamburg, Venice, and Brisbane already use their waterways effectively for transporting people. Most cities are more advanced when it comes to waterborne transport for goods. Paris, for instance, already has a lot of its food delivered via waterways, and you could highlight a lot of other cities with potential. As long as they have safe inland waterways like rivers, canals or lakes, they should consider waterborne public transport as a solution to congestion.

How will cities themselves change if we use their rivers and shores efficiently?

In Hamburg, for example, you have thousands of low bridges, which limits the possibilities of moving around on the canals. Instead, we could build floating bridges. If we're using our cars less, we could change our mode of transportation so easily. You could walk from bridges onto boats, sit for a little while, disembark, and then carry on walking. Or you could get on a shared bike or scooter. It's a different way of looking at a city, a comprehensive system-related change. If we have connections, hubs between the different traffic modes like ferries, buses, metros, and can smoothly switch modes, we could change cities for the better. And build parks instead of roads.

What could those hubs look like? Are there new ways of getting people on and off the water more effectively than traditional terminals?

With old ferry models, boarding takes quite a bit of time. But why not open up the sides, like in a metro? If travel time is the most critical factor for people who manage public transport, this is the one thing that needs to be done. The Chalmers University of Technology in Gothenburg constructed a vessel model just like that. Right now, waterborne transport is very old fashioned. That's why we only use it for holiday and leisure purposes when you have all the time in the world. But it could be much more effective. And no one has tried that yet. 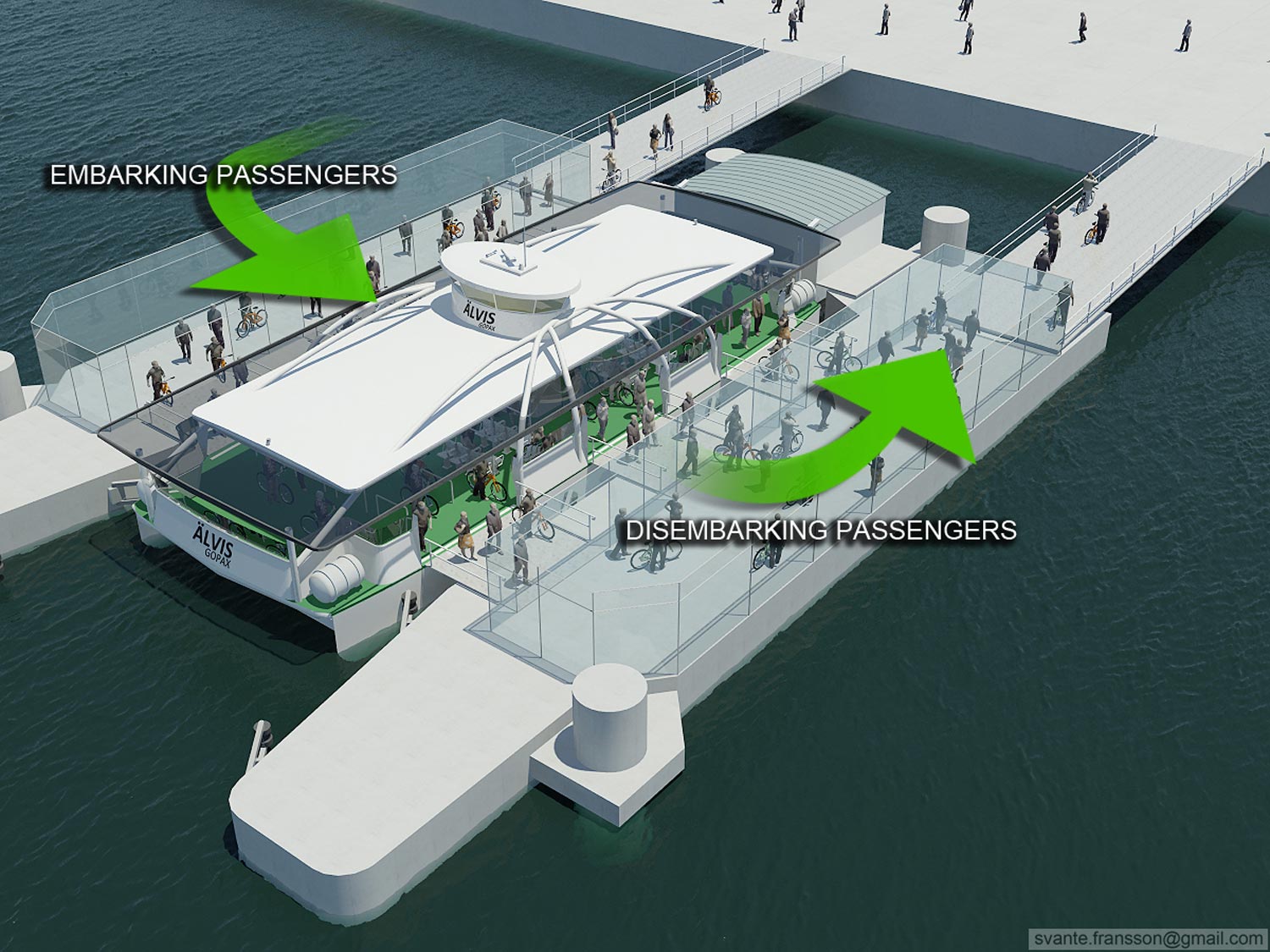 Boarding takes a while at traditional ferry terminals. One solution could be to open the sides of the vessel to ensure faster turnarounds. Credits: svante.fransson@gmail.com

To make it more effective, we also have to talk about speed. What are electric vessels capable of right now?

Automotive development has paved the way and made everyone more comfortable with electric mobility. Now, we need more joint projects to prove what the technology is capable of on the water. That's why I try to bring researchers together with urban planners and industry. How powerful can a battery-powered vessel be in a strong upstream current or where there are significant tidal ranges? How does ice affect it? Those are all questions we're exploring right now.

How is waterborne electric transport doing with regard to reliability and safety compared with other kinds of public transport?

In Stockholm, we've had a couple of winters with a few days of -20° and heavy snowfall. On the worst days, all modes of transport have stood still, except for boats. In fact, the city puts on additional boats instead of the metro to ship people home after work. Here in Stockholm, we have two ferries running on electricity. They've been operating for four or five years, so we're getting more and more certain about how safe it is.

What forms could sustainable waterborne public transport take in the future?

Vessels could be as small as twelve seats, and they could also be huge. Boats crossing rivers don't need a lot of seats because it's just a five-minute trip. If you live further away from the city, you could be on a ferry for an hour or so – and do so comfortably because there's more space on a boat than on a bus or metro. So you could have your laptop on a table, plus electricity and Wi-Fi. There are so many possibilities. 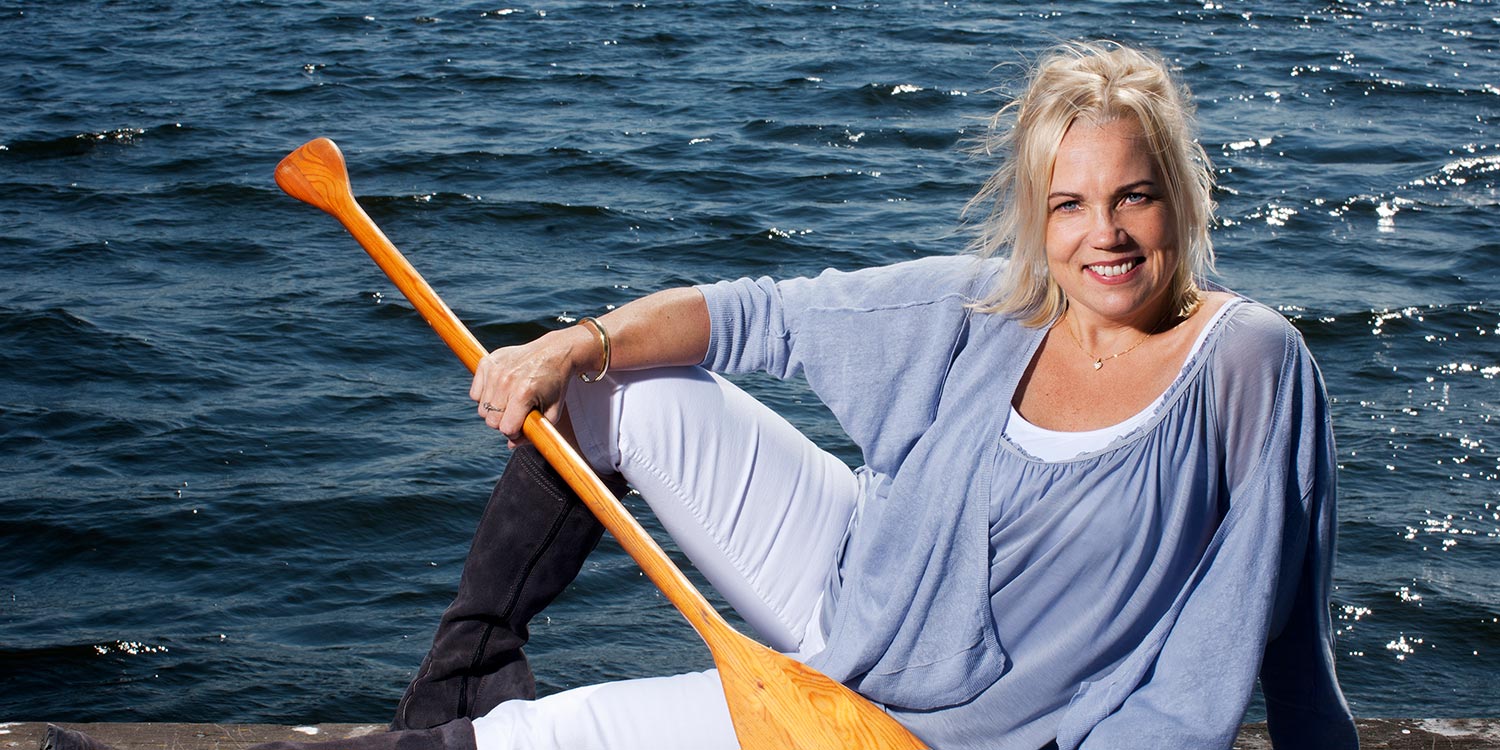 Susanna Kihl, the founder of Vattenbussen, a Stockholm-based nonprofit that works towards realizing sustainable waterborne public transport in cities. She is also a mother of two and knows what it means to be trapped in the car during a traffic jam.

"Cities are built near water for a good reason."

Travel around the world

No Fuel, No Fumes

Changes to the Torqeedo management team

Made in Bavaria – The Markus Glas Boatyard