The Cat 12.0, a 100% solar-powered catamaran, would have been regarded as a novelty five years ago. But Sun Concept, a Portuguese start-up, is now in serial production of these 12-metre-long catamarans with twin Deep Blue motors which can be configured as tour boats or recreational yachts.

João Bastos has the perfect education for a career in 21st-century boating. While pursuing his Master’s degree in marine biology, the 35-year-old he studied marine birds and developed birdwatching routes in marshlands. After graduation, he worked for ecotourism companies. But boats going out to enjoy the company of whales with noisy diesel engines always struck him wrong. “It doesn’t make sense in the short or long term,” he says. “The engine noise scares away the animals during your trip. And the emissions make it quite possible that we are the last generation to experience nature like this.”

Maybe you need to understand the fragile, intricate beauty of underwater ecosystems, to really know how perilous the situation is, to go all-in for change.

In 2016, João Bastos became the general manager of Sun Concept, a start-up which specializes in manufacturing solar-electric boats. “We develop clean, energy-efficient and independent boats,” says Bastos. The overall goal is “to promote the use of renewable energy in the nautical sector.” The new Cat 12 makes a pretty good point: The solar-powered catamaran is 12 metres long and has up to a 42-passenger capacity. Onboard solar panels deliver the energy to power twin 25 kW Deep Blue electric motors. “You can sail at zero cost and your maintenance is 85% cheaper than on traditional boats “, says Bastos. 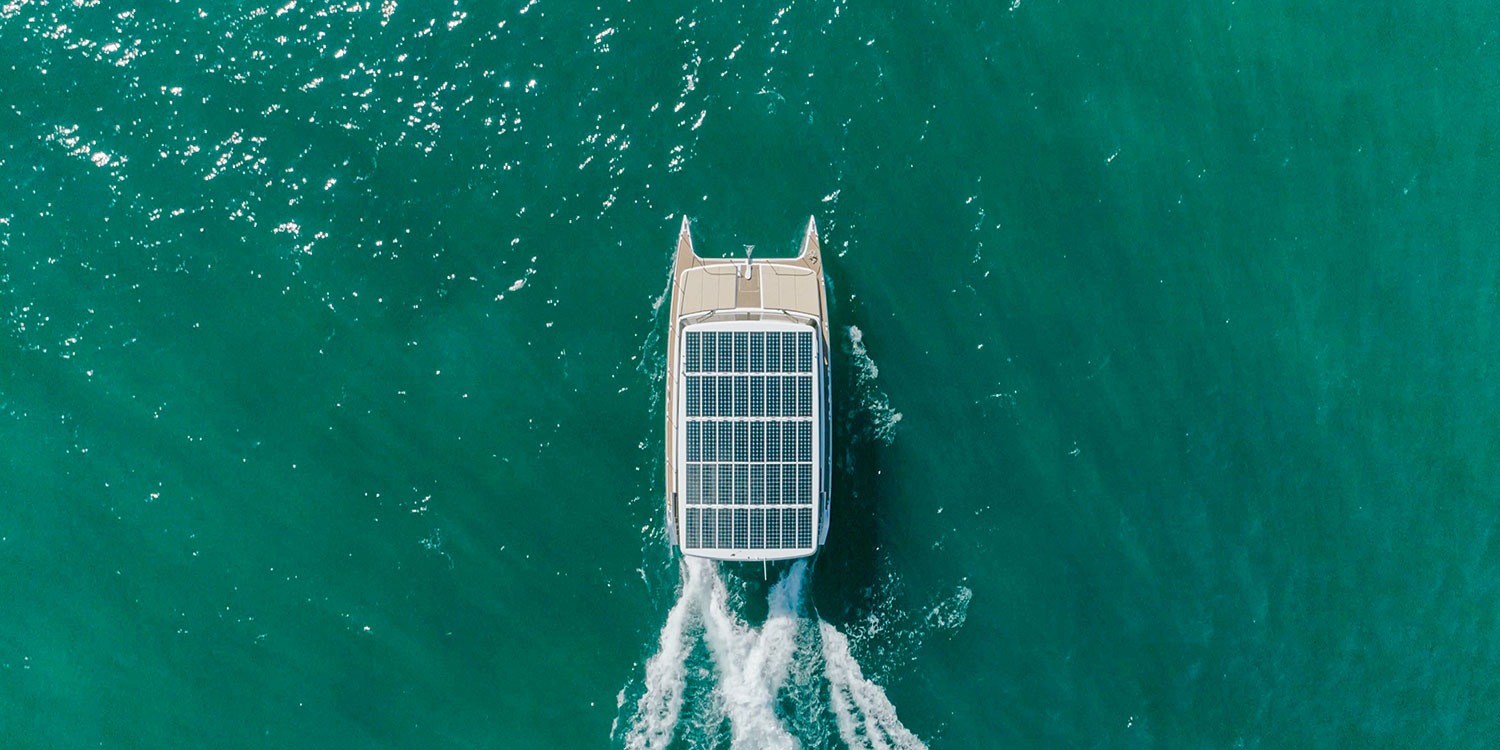 The Sun Concept headquarters and shipyard are located in Olhão, an old seafarer’s city on the Algarve coast at the very edge of Europe, where people always looked out onto the endless Atlantic Ocean and wondered what’s behind the horizon. “Building boats is an ancient industry here,” says Bastos. In the past decades, the old shipyards couldn’t compete with global markets and went out of business one by one. But João Bastos is not looking back. “We build the company from scratch,” he says. The average age of the 25 employees is under 40, and many of the engineers are graduates from the Instituto Superior Técnico at the University of Lisbon, one of Europe’s finest tech schools. “We have a different mindset than many boat builders,” says Bastos. Sun Concept works agile and relies on computer-assisted design. “Before we were satisfied with the hull design, we went through 14 iterations.” 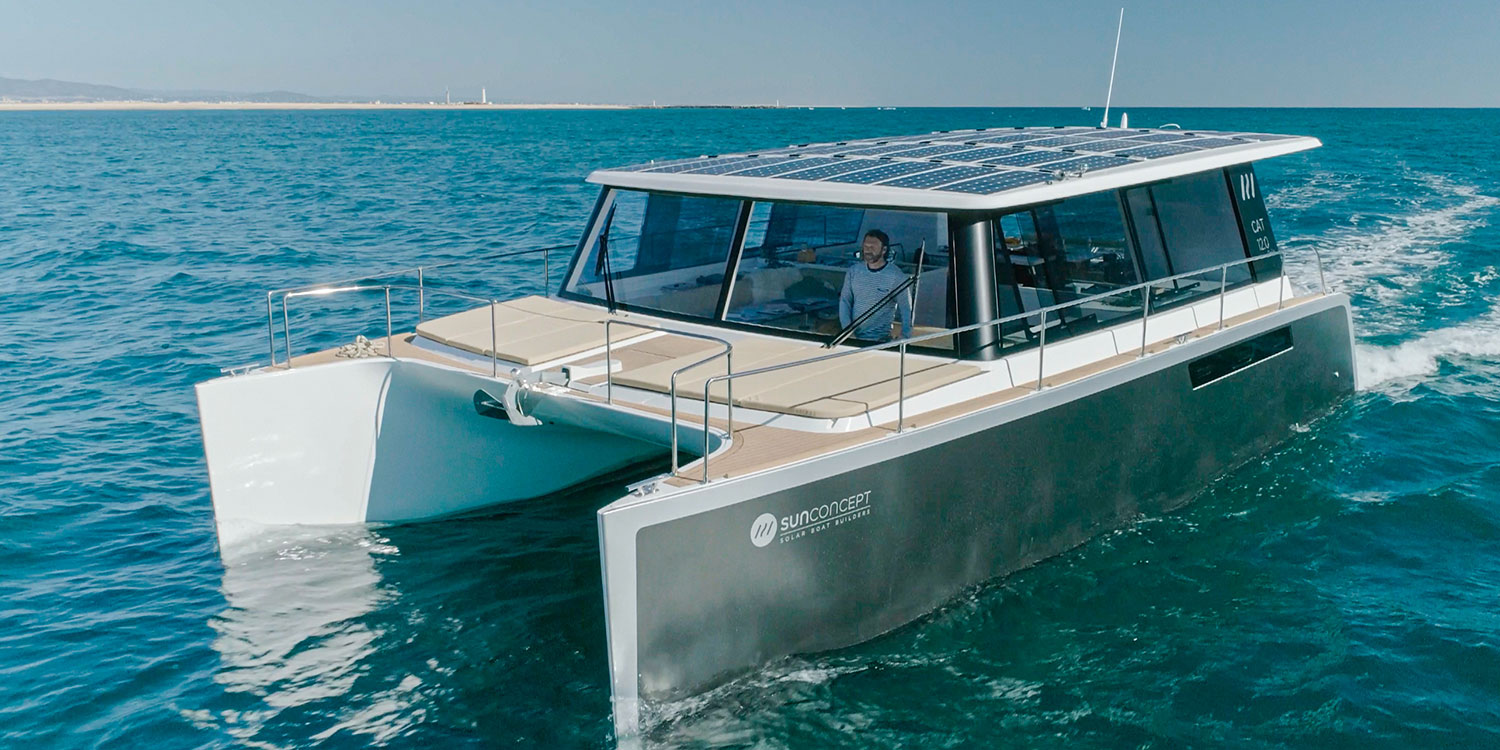 Classic and modern at the same time: The exterior design shouldn’t overshadow the beauty of the system, says Bastos. Credits: Sun Concept

Torqeedo is an ideal partner for Sun Concept because of its integrated high-tech propulsion and energy management system. João Bastos sees the Bavarian engineers as like-minded spirits. The goal of Sun Concept is even bolder than developing a solar-powered catamaran: “Proof of concept is not what interests me,” says Bastos, “We always wanted to go in serial production.” Cat 12.0 is designed as a platform which can fulfil the needs of different customer segments. “We have three different layouts of the boat: two for tourism and passengers and one for recreational use,” says Bastos. The passenger version has up to 42 seats on deck, and the cruise version has a spacious lounge area. The boat can be ordered in fibreglass or carbon construction. The website lets potential users configure their dream with a few clicks – what kind of material? Motor? Color? Any extras? An on-deck shower, maybe?

The design of the Cat 12.0 is classic and modern at the same time. The large framed windows are reminiscent of Bauhaus architecture; the aerodynamic hulls are just sci-fi enough. “Futuristic design was never the point,” says Bastos. “We want people to see a normal boat when they see the Cat 12.0. A boat that works.” In his mind, the exterior design shouldn’t overshadow the beauty of the system.

After five years on the market, Sun Concept has three Cat 12.0 in the water – and many seven-metre SunSailer boats which use Torqeedo Cruise 2.0 and 4.0 motors. “Five years ago, we were considered crazy”, says Bastos, “but the technology made giant steps and now we just need to use it.” For Bastos, the electric mobility revolution on the water does not require innovations, but routine use. “Confidence is the biggest change driver,” he says. Sun Concept is exploring new use cases: urban river ferries for 100 people or workboats for aquaculture. Everything seems possible now.

To demonstrate the potential of the solar-electric yacht, Bastos is planning a non-stop cruise with a Cat 12.0 from Portugal to Malta, or even across the Mediterranean, using nothing but solar energy. “In theory, you can go around the world like this without going into a harbour once,” says Bastos. “Nobody would do it, of course, because it would take years and years. But still: Isn’t that a neat idea?” 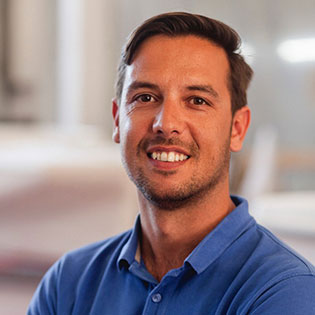 João Bastos made his Master’s degree in marine biology and is now the general manager of Sun Concept, a start-up which specializes in manufacturing solar-electric boats. “We develop clean, energy-efficient and independent boats.” The overall goal: to promote the use of renewable energy in the nautical sector.

“The beauty of self-sustainable life on a boat”

"Cities are built near water for a good reason."