The German-Ukrainian Olympic sailor Anastasiya Winkel (28) took children and young people who had to flee Ukraine to the Outer Alster in Hamburg for the Helga Cup, an international sailing regatta for women. The four-day regatta hosted by Hamburg’s North German Regatta Association (NRV) showed what the international sailing community stands for in these difficult times: empathy, cooperation, and enjoyment of mobility on the water.

The reeds and drooping branches of the weeping willows at the edge of Hamburg's Outer Alster Lake were bending in the wind, the masts of the waiting sailboats jingling almost aggressively. The wind had freshened up. While the 20 or so Ukrainian children and young people who would soon be boarding a sailboat for the first time were still sitting somewhat shyly between their mothers, NRV’s Hamburg sailing kids stormed sailing star "Nasty" shouting, "Autograph! Autograph!" So the Ukrainian Consul-General had to wait for a short while until Anastasiya Winkel had scribbled her autograph on all the children's forearms – and calm returned.

Last weekend, the Helga Cup, the world's largest sailing regatta for women, took place on the Alster for the fifth time. Torqeedo has supported the event for years by supplying electric motors for the coach and work boats, while closely collaborating with the NRV to promote a sustainable, open culture in sailing.

The opening day of the four-day regatta was focused on the engagement against the war in Ukraine. The German-Ukrainian Olympic sailor Anastasiya Winkel was accompanied by four professional athletes from Ukraine and several NRV sailors as she showed the young refugees their new hometown of Hamburg from an entirely new perspective – from the water. As the patron of the event, the Ukrainian Consul-General Iryna Tybinka, pointed out, "as long as the war does not become a habit, we are hopeful it will end soon." Anastasiya Winkel, who followed the love of her life to Germany six years ago and now competes for Germany, also says she is afraid that Europe will soon forget the war in her homeland: "To start with, there was an unexpected amount of help. That was great. It would be nice if it stays that way." 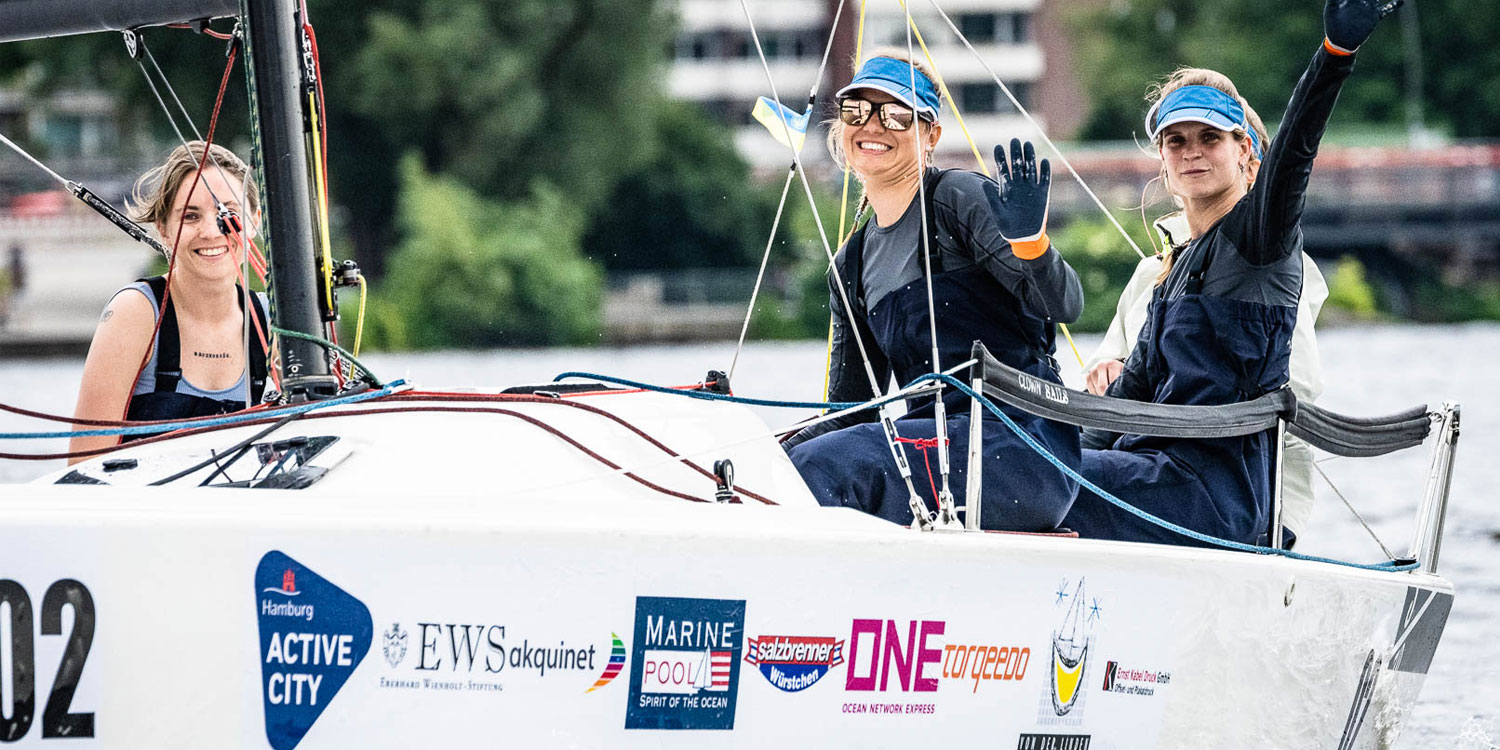 On this particular day, the war was far away. And that's how it should be. "This day is simply about the children having fun," said Sven Jürgensen, initiator and organizer of the Helga Cup. “Having fun in water sports is the most important thing, and yet these times are always about bigger things, too – empathy and cooperation, for example.” Since the beginning of the war, Anastasiya Winkel has found accommodation for more than 60 Ukrainian refugees in northern Germany. Many of these refugees are female sailors, who in turn have found a home with German sailors – the sporting community as a support network. So despite their difficult situation, these sailors can continue to practice their beloved water sports – and to put the war aside for a few moments.

Sailing, says Anastasiya Winkel, is sport for the soul: "When I'm on the water, I can switch off my mind and be in the here and now. And most kids just love their time on the water, too.” On this special day, they were able to try their hand at sailing, even if they don't speak much German yet. Especially for them, the NRV has hired a Ukrainian sailing coach, who also had to flee the war. She will be offering regular courses on the Outer Alster in the coming weeks and months, and registrations are already coming in. 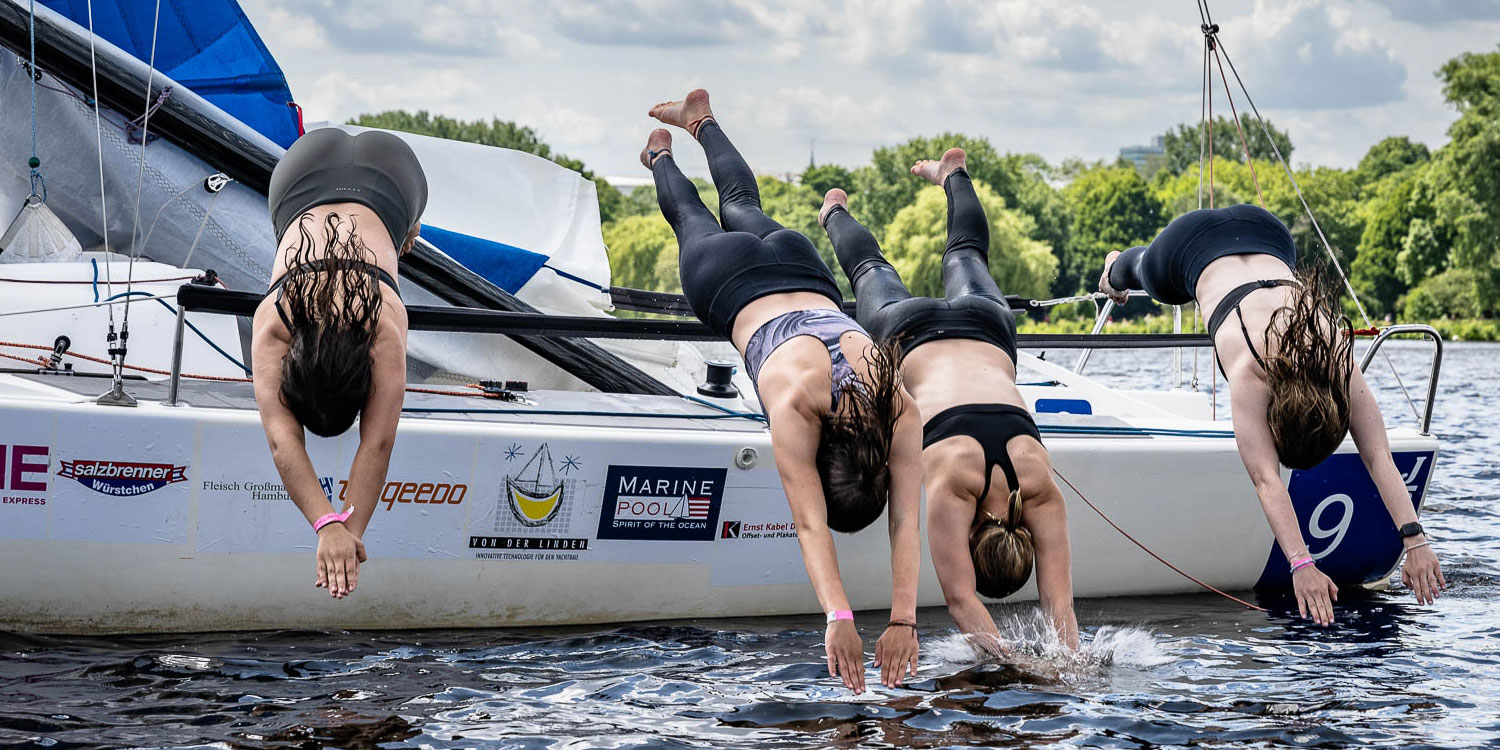 Simply enjoying time on the water – that's what the Helga Cup is also about.

"When you leave your home country," Anastasiya Winkel says, "you're often lonely. You sit in front of your cellphone or laptop all day. But it's also important that parents can see their children really happy for a change – and regain a bit of normalcy." Anastasiya is married to the German pro sailor Malte Winkel and has lived in the German coastal city of Kiel for several years. But her mother and grandmother are still in the eastern Ukrainian city of Alchevsk, and her half-brother in Kiev.

The NRV is "like a family" to her, Anastasiya explains. Her voice breaks when she talks about how the sailing club has been there for her "in the hardest times". When it was time to sail out onto the lake, its heavily rippled surface glistening in the sun, the teams of Ukrainian children, Hamburg sailors and the Ukrainian professional sailors headed out into a world of its own where everything was just right – at least for a few hours.

Cast Away: how and why to fish with an electric outboard