Standardisation of power is nothing new. It goes back to James Watt, who defined horsepower in the 18th century to demonstrate the performance of his steam engine. Since then, it‘s been measured uniformly in HP or, in honour of its inventor, in watts. And with that, everything should be clear, shouldn‘t it?

Not completely. It depends on where and how you measure. The most meaningful performance indicator of a drive system is propulsive power, which indicates the performance actually delivered by the motor to move the boat, taking all losses, including propeller losses, into account. This method has been used in commercial shipping for nearly 100 years.
For petrol and conventional electrical outboard motors the propulsive power is not normally revealed. Instead, less meaningful indicators are used, such as shaft power, input power or even static thrust.

That wouldn’t be so bad if the differences between the various power ratings were minimal. But they aren’t; they’re very large. The propulsive power of a petrol outboard with 4 HP shaft power, for example, is just 1 HP. How can the differences in efficiency levels of different types of motor be measured? We’ll shed some light on them. 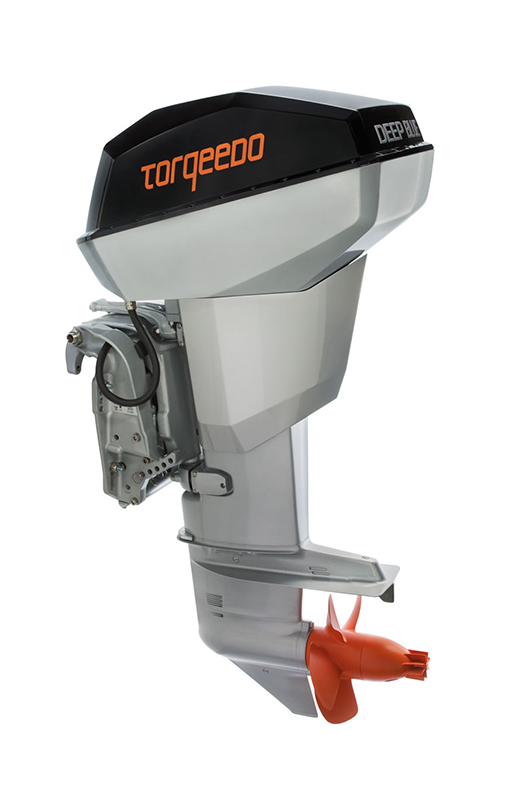 Our focus on optimising propulsive power and our use of the latest technologies means Torqeedo has the highest overall efficiency on the market. That is, every Torqeedo drive converts its available battery power to propulsive power better than any other outboard. This is very important for electric drives because it means more power and range from limited battery capacity.

Electric motors can achieve the same propulsive power as combustion engines with significantly lower shaft power. The reason lies in the different torque curves of electric motors and petrol engines. While the torque curve of combustion engines features a prominent peak, with maximum torque being available only over a limited engine speed range, electric motors feature a much flatter torque curve with ample torque available at any engine speed.
This characteristic allows them to run substantially higher efficiency propellers – even in lower performance classes – than combustion engines. Propeller efficiencies in the lower horsepower class can vary by a factor of 3 between petrol outboards and Torqeedo electric outboards.

In the Technical Data section, we provide all information on input power, propulsive power, overall efficiency and comparable petrol outboards for your reference.