Three years ago, the high-tech catamaran Moonwave became one of the first boats in the world equipped with a Torqeedo Deep Blue Hybrid propulsion and energy management system. Forty thousand nautical miles later, the crew and the owner, Stephan Schambach, exclusively share their experiences and learnings with the Torqeedo community

Even in paradise, life can be challenging. The 20-meter catamaran Moonwave was sailing across the Indian Ocean on her round-the-world journey in early Spring, 2021. “The sunsets are fantastic,” crew member Sophie, who prefers to use her first name, noted on the boat’s website. Between Bali and Sri Lanka, they spotted numerous dolphins, manta rays and beluga whales. But, the chaotic wind conditions in the equatorial region forced the Moonwave to veer further and further north.

“Unfortunately, the forecasts were unreliable: instead of winds of 10 knots, we often had only one to three,” Sophie reported. Moonwave was able to demonstrate how a combination of sailing skills and green propulsion technology can minimize a boat’s CO2 footprint, even in challenging sailing conditions. “We used the electric motor to get from one patch of wind to the next.” The crew often added about 1 kW of power to increase the apparent wind, assist the sails and increase speed by a couple of knots. They have enough battery capacity onboard with their Deep Blue system to run the drive all day before the range extender kicks in and tops up the battery.

When they arrived in the Seychelles, they had traveled 4,800 nautical miles instead of 3,800 as the crow flies. Yet, the diesel tanks were still one-third full. “Our tanks are smaller than boats of similar size. That’s a good feeling – and nice planning by the captain,” Sophie says. 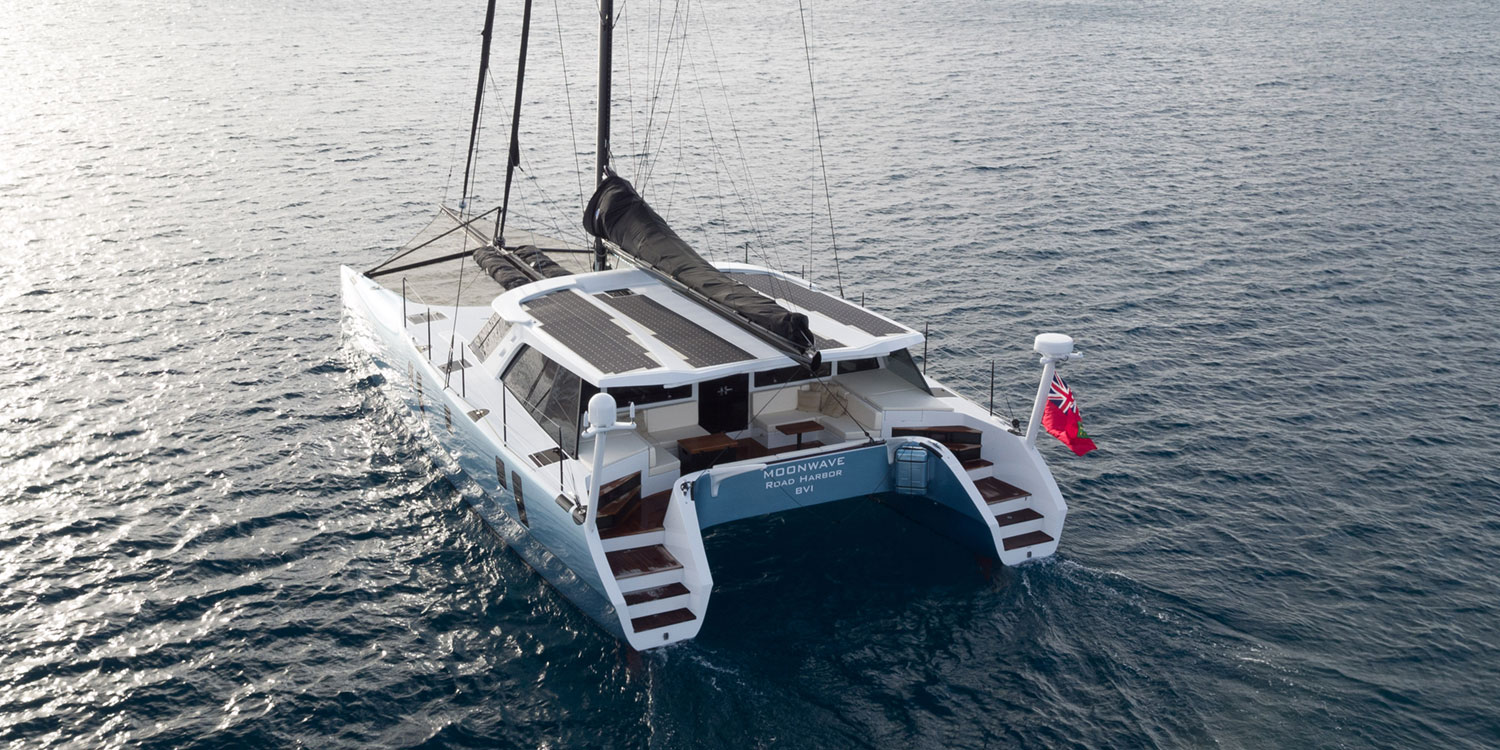 The 20-meter yacht Moonwave has solar cells on the roof and the Deep Blue system charges itself while sailing. Credit: Flo Hagena

Moonwave is not only one of the world’s most luxurious sailboats but also a pioneering project that brings a new kind of mobility to life. In 2018, the ocean-going catamaran became one of the first boats in the world equipped with a Torqeedo Deep Blue Hybrid propulsion and energy management system. Two Deep Blue 25 electric saildrives ensure that Moonwave can explore the world's oceans while minimising harmful emissions. Solar panels and hydrogeneration charge the battery with green energy. The diesel generator is used sparingly. Since 2018, the boat has travelled more than 40,000 nautical miles and crossed three oceans. “We’ve circumnavigated three quarters of the world – in the right style and great comfort,” Sophie says. “And we’ve man-aged entire passages of up to 1,200 nm without using a drop of fuel.” That's exactly how Moonwave was designed. “It is the ultimate kind of freedom,” says Moonwave owner Stephan Schambach. “Everything else – even flying – is highly regulated. Moonwave can sail thousands of miles and we only need vegetables – our proteins come from fishing and water from the water-maker.”

Sailing around the world in a pandemic

Independence has been critical in the recent past. As COVID-19 spread around the world in the spring of 2020, Moonwave was on her way from Panama City to the South Pacific. “Seasons and weather don't wait for countries to open – and safe shelter is sometimes a long way away,” Sophie points out. Moonwave rarely needs to call at a port to pick up diesel or water, a huge advantage in this situation. Originally, the plan had been to sail to New Zealand, but after a short stop-over in French Polynesia, they sailed past locked-down tropical paradises. On and on they went. In January 2021, they arrived in Bali, Indonesia, and were finally able to enjoy a short break.

On their journey around the world the crew has enjoyed many unique experiences. Credit: Sophie Bre

Moonwave is a dream come true. German web entrepreneur Stephan Schambach wanted to explore the oceans without the noise of diesel engines, so he was looking for a catamaran with an electric-hybrid propulsion system. But, nine years ago, he couldn’t find a boat that met his needs. In the mid-1990s, Schambach developed the first-ever software for online stores. He’s shaped the e-commerce industry from its earliest days and has founded several billion-dollar enterprises. Shambach isn’t satisfied with an answer like ‘It can't be done’, so he founded a company, Moonwave Systems, to develop the electric drive system.

“It was a passion project. But I usually combine passion with entrepreneurship,” he recalls. Moonwave Systems soon began collaborating with Torqeedo to perfect the hybrid system. The entrepreneur and digital expert was right at home in the development process of the sustainable drive and energy management system: “Software was, and is, the most complicated and expensive part of the Deep Blue System. So, it’s not that different from what I’m an expert in, but just has the added complexity of a hardware supply chain and manufacturing challenges,” he says. In 2012, Moonwave was launched. “Since then, we've seen a lot of innovation and progress,” he says.

On the long ocean crossings, captain and crew are usually alone, like astronauts on their way to Mars. “For years, we’ve been used to being together 24/7, so I guess that first of all you need cohesion amongst the crew and with the boat,” Sophie says. “No two days are alike, which keeps us on our toes, and we rarely get bored.” The most important factor for long-distance sailing and ocean crossings is autonomy and the reliability of the onboard systems and components. Since the hybrid system was installed, they haven’t experienced any severe problems.

“As the hybrid system requires so little maintenance, it actually frees up time to focus on other equipment and the development of new systems for the boat,” the crew reports. Every few months, the service technicians at Torqeedo's German headquarters send a remote software update to Moonwave. Just recently, she received another battery upgrade from 30 to 40 KW within the same footprint. After each upgrade, all functions are tested and the journey continues. 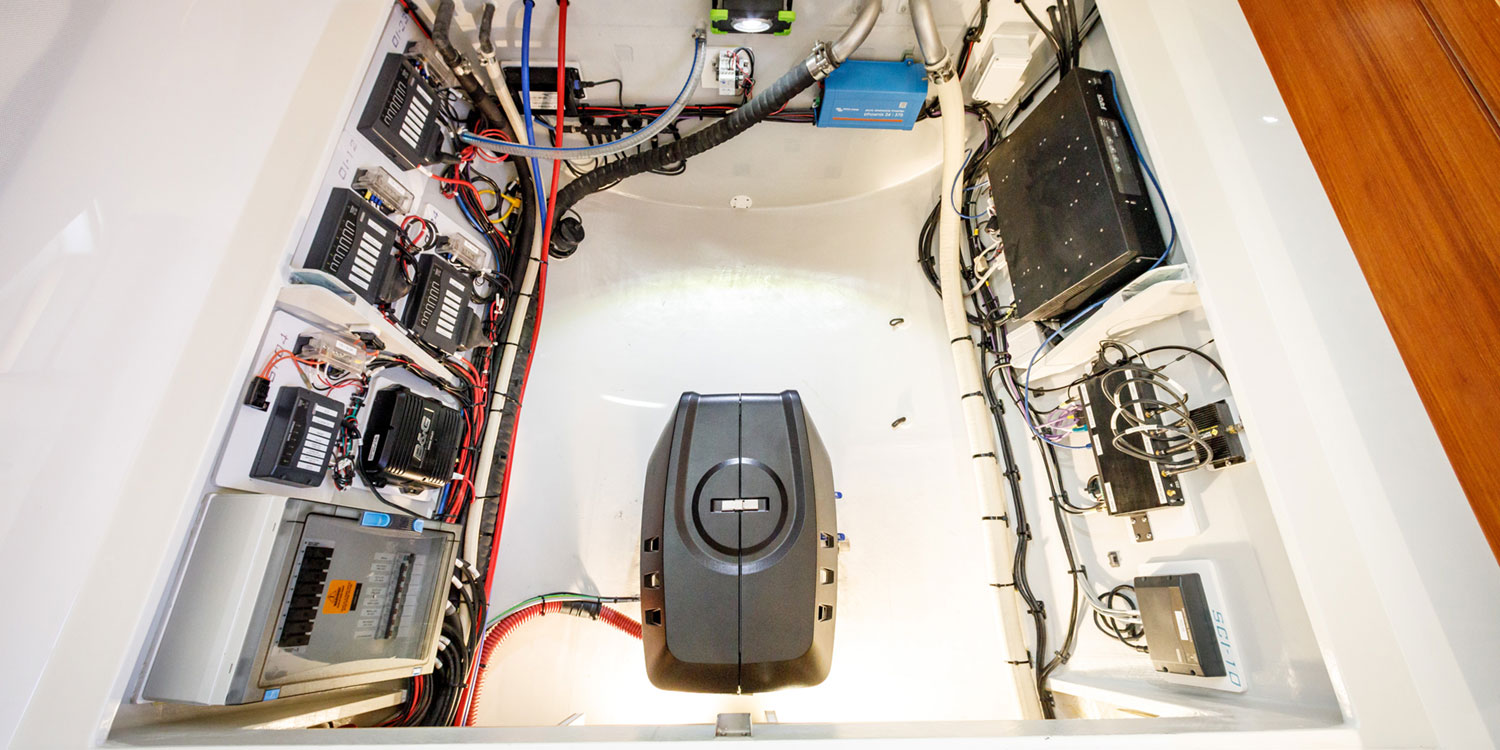 The hybrid system not only offers propulsion advantages, but also increases comfort and convenience on board. “During an ocean passage we don't need to run the generator, as hydrogeneration and solar energy are enough to power the yacht,” Schambach reports – wind and weather permitting. The solar modules provide sufficient energy for several days while the yacht is anchored with only the crew on board. With eight guests, the battery needs to be charged for a maximum of 30 to 45 minutes per day. “This delivers enough energy to entertain ten people, including use of the bathrooms, elaborate electric cooking, and the watermaker,” Schambach says. In 2020, Moonwave’s crew involuntarily tested this setup for much longer. “We found ourselves spending several months at anchor without access to shore and technical supplies,” Sophie recalls. “Moonwave’s autonomy and reliability were as crucial as on the high seas.”

Although the Moonwave crew spend a lot of time at sea, thousands of miles from land, they still notice how the world is changing. Off the coasts of India, they passed countless fishing boats yet barely caught a fish themselves. Instead, they pulled plastic bags out of the water and watched raindrops leave sooty stains on the boat. Moonwave is a heart project for the owner, the crew and, of course, Torqeedo. “Sailors, in general, have always been connected to nature, with a profound respect for it and a sense of humility,” Sophie says. Of course, it’s nice that Moonwave has low emissions and is so quiet, but it's not just the boat or the technology that is environmentally friendly, it’s the way the boat is used. “This means sailing in line with weather and wind patterns and respecting seasons – and that sometimes involves taking time and not going against wind and currents.”

Moonwave has now been on the water for almost ten years but is far from reaching the end of her journey. When tech expert and visionary Stephan Schambach looks to the future, he sees a “fully electric boat with a hydrogen range extender – and an electric motor-only range of up to 3,000 miles.” He expects breakthroughs in materials research to make yachts even lighter and more dynamic, and smart computer systems will assist in sailing. By 2030, he says, “yachts will only be electric or hybrid-powered. Why shouldn't they be? The technology exists today.” Moonwave is the best possible proof.

Be part of the journey

Want to learn more about this innovative and sustainable catamaran? The crew write about their current position and adventures on the website www.moonwave.com.
Read the news blog and get all the technical data and latest images.