The Cruise motor series is one of Torqeedo's bestsellers. Thanks to its efficiency and long range, it offers a wide variety of applications – as shown by these six examples from around the world.

Sweden: At one with nature 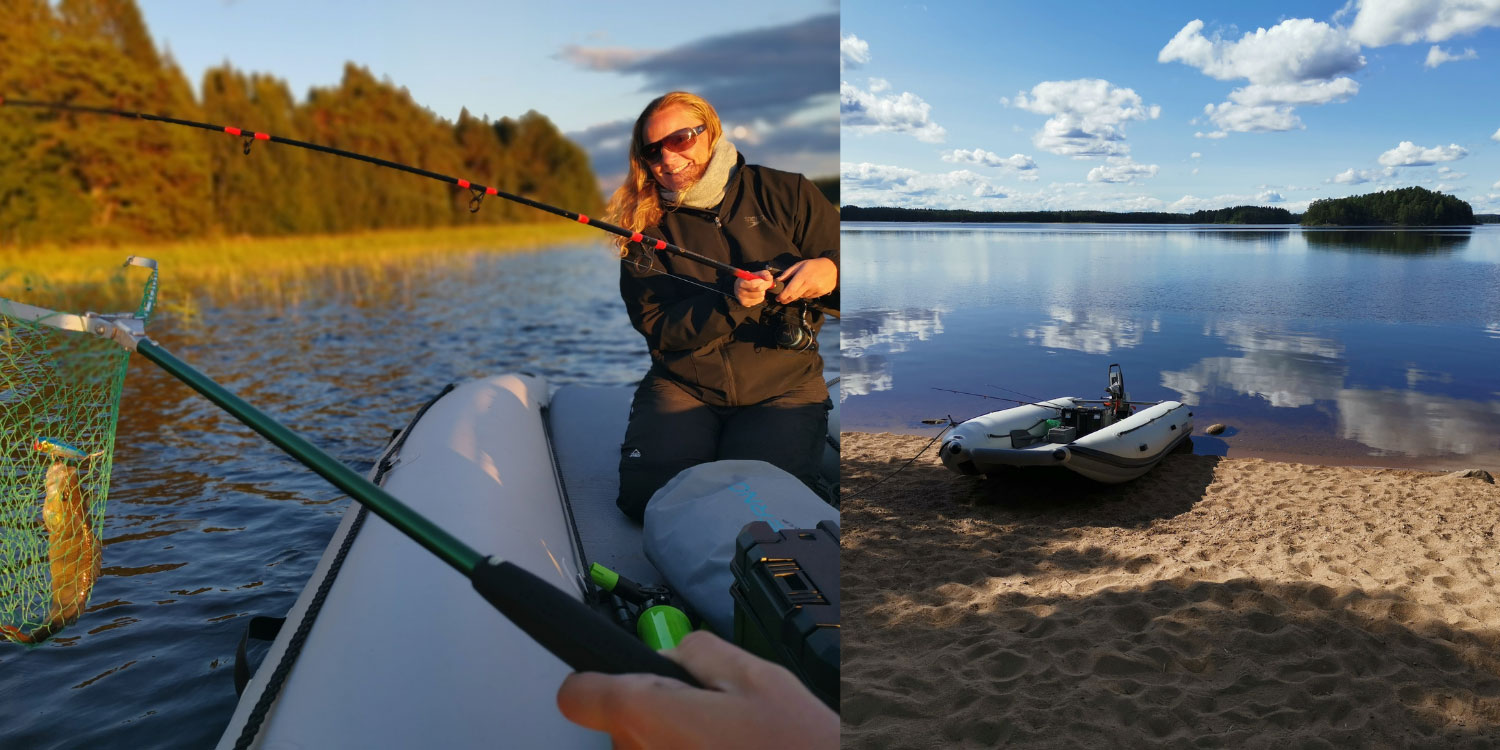 Swedish photographer Lukas Bergliden loves life on the water – the freedom, the tranquility, the perfect light just before sunset. Most of the time he's out and about on a Takacat LX380 inflatable boat, a 44-kg RIB he inflates when he reaches a lake or the coast: "For me, it's all about being mobile," he says. Weight and ease of use also played a big role when he was looking for an electric motor in 2020. For almost a year, Bergliden researched the possibilities and then chose the Torqeedo Cruise 4.0. "The electric motor can run for many hours if you don't go full throttle all the time," Bergliden says, "My concern that the range might be too short has gone." Late last summer, he and his girlfriend Åsa took a trip around Fjärnebofjärden in central Sweden. For three days, they used a small wooden shelter as a base camp and went on fishing expeditions. The Cruise electric motor whirred along quietly. " This was the first longer trip we took," Bergliden recalls, "and still had a third of the battery capacity available at the end."

Thailand: New ways through a city

With its numerous canals, Bangkok used to be known as the "Venice of Southeast Asia". But in the 20th century, many of the channels were filled in to build new roads. The Thai capital has, for years, been one of the cities with the most traffic jams and worst air pollution worldwide. But it is now increasingly relying on electric mobility on the water.

Since November 2020, eight electric ferries have been in operation on the Klong Saen Saeb Canal, each powered by two Torqeedo Cruise 10.0 R motors and twelve Power 24-3500 batteries, offering space for 40 passengers. Twelve more boats are currently being built at the MariArt boatyard. A subsidiary of the Bangkok Metropolitan Administration is managing the project to relieve pressure on the public transport system. "In the past, boats were very noisy and there were a lot of exhaust fumes. With electric motors, we can listen to music and enjoy the ride," says the Governor of Bangkok, Assawin Kwanmuang, who assumes this will increase acceptance of the new means of transport. But there are other good reasons: The electric ferries are not only faster than traditional diesel boats; the solar cells installed on the roof of the nearly 10-metre-long boats increase their range by another 20 per cent.

France: The sun of the south 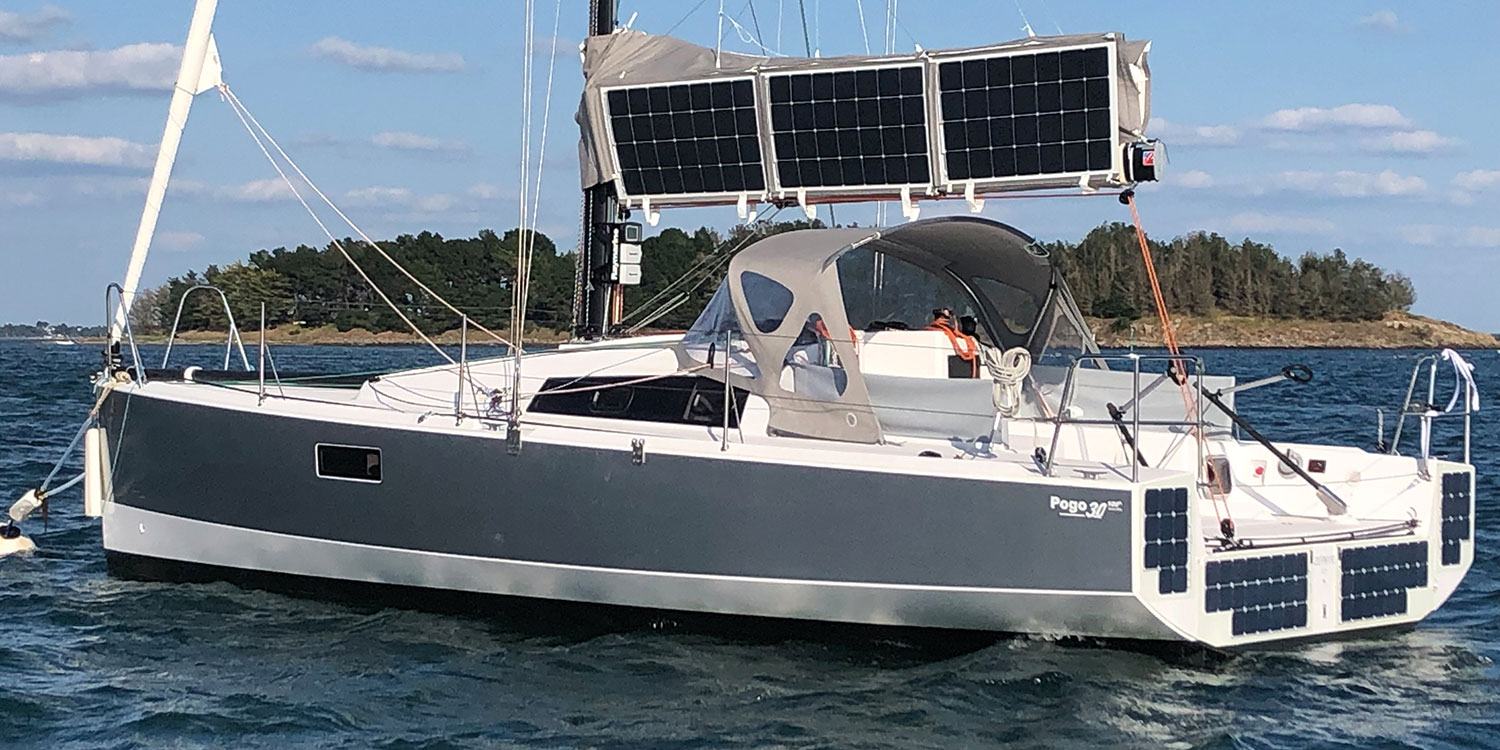 As Leader of Marine Innovation at Raymarine, Mark Johnson naturally has an expert's view of boat propulsion. When he plans a three-week sailing vacation with his family, as he did in the summer of 2020, he wants the same things as any other sailor: no technical problems, enough power for the engine, peace, quiet, and relaxation. The Johnsons sailed a Pogo 30 yacht equipped with the Torqeedo Cruise 4.0 fixed pod, two Power 48-5000 batteries with a side-mount sail throttle and a unique solar charging system on the Atlantic from Vannes to La Rochelle. "We had no technical problems and didn't even have to go ashore to recharge," Johnson reports. On sunny days, the Solbian 1kW solar array peaked at 600W around noon, keeping the 10kWh Torqeedo lithium battery bank above 75% most days. "We even had a surplus of power to the point that I'm now planning to experiment with a hot water tank," Johnson says. Of course, like many sailors, Johnson and his family planned the trip around favourable wind conditions. But there were always lulls when the Cruise electric motor came into play. "Running the motor at 1 kW gives the ideal fishing speed of 3.5 knots," Johnson says. The summer cruise showed that sailing vacations with the family are made even more enjoyable with an electric motor and solar panels. "Life on board is quieter and cleaner, and it's been two years since we've visited a diesel repair shop – that is cause for celebration."

UAE: Everything under remote control 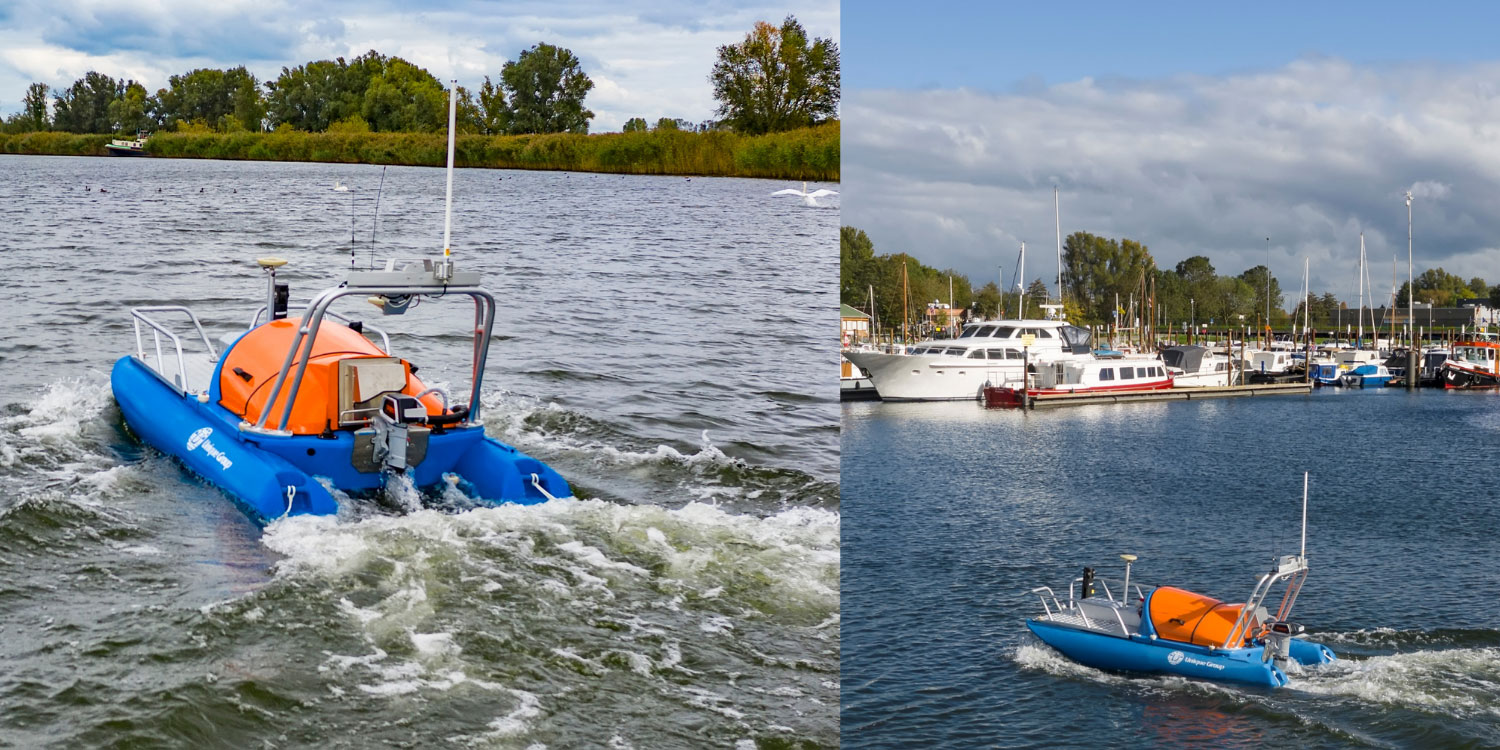 It's fun to glide quietly and emission-free over the water with the Cruise Motor. But when the Dutch company Unique Group was looking for an electric drive for a new watercraft, other parameters played a role. After all, the Uni-Cat is a crewless autonomous survey vessel (ASV). And fun gliding is not the main focus of artificial intelligence. ASVs serve various purposes, such as coastal surveying or inspecting harbour facilities or oil drilling rigs.

The Uni-Cat is equipped with a Torqeedo Cruise 2.0 RS electric motor. "When we did a first sea trial with our first ASV, it worked like a dream!" says Ros Roque Gomes, an engineer in the UAE. The motor is lightweight and is smooth and easy to handle, he points out. Electric motors are perfect for autonomous watercraft because they are easy to interface with electronic and digital systems such as GPS or remote control. "We use a remote throttle control on our ASV. It was straightforward to mount on the stern," says Ros Roque Gomes. In the 21st century, autonomous vehicles are becoming more common – whether as drones in the air or ASVs on the water. "We had a really good experience with the Cruise 2.0 RS," Ros Roque Gomes relates, "and we intend to use it for our future ASVs as well."

Australia: Sustainable picnic on the water

Explore your own or a new city by canal, have a relaxed picnic, and be your own captain – without exhaust fumes and engine noise. GoBoats came up with this kind of green city trip back in 2014 in Copenhagen and has now exported the idea to England and Australia, among other places. In 2019, GoBoats cruised the Yarra River in Melbourne for the first time. The boats are powered by a zero-emission Torqeedo Cruise 4.0 engine and consist of 80% recycled plastic. The wood used on the boats comes from sustainable sources.

Ecuador: "Fire-canoe" in the jungle 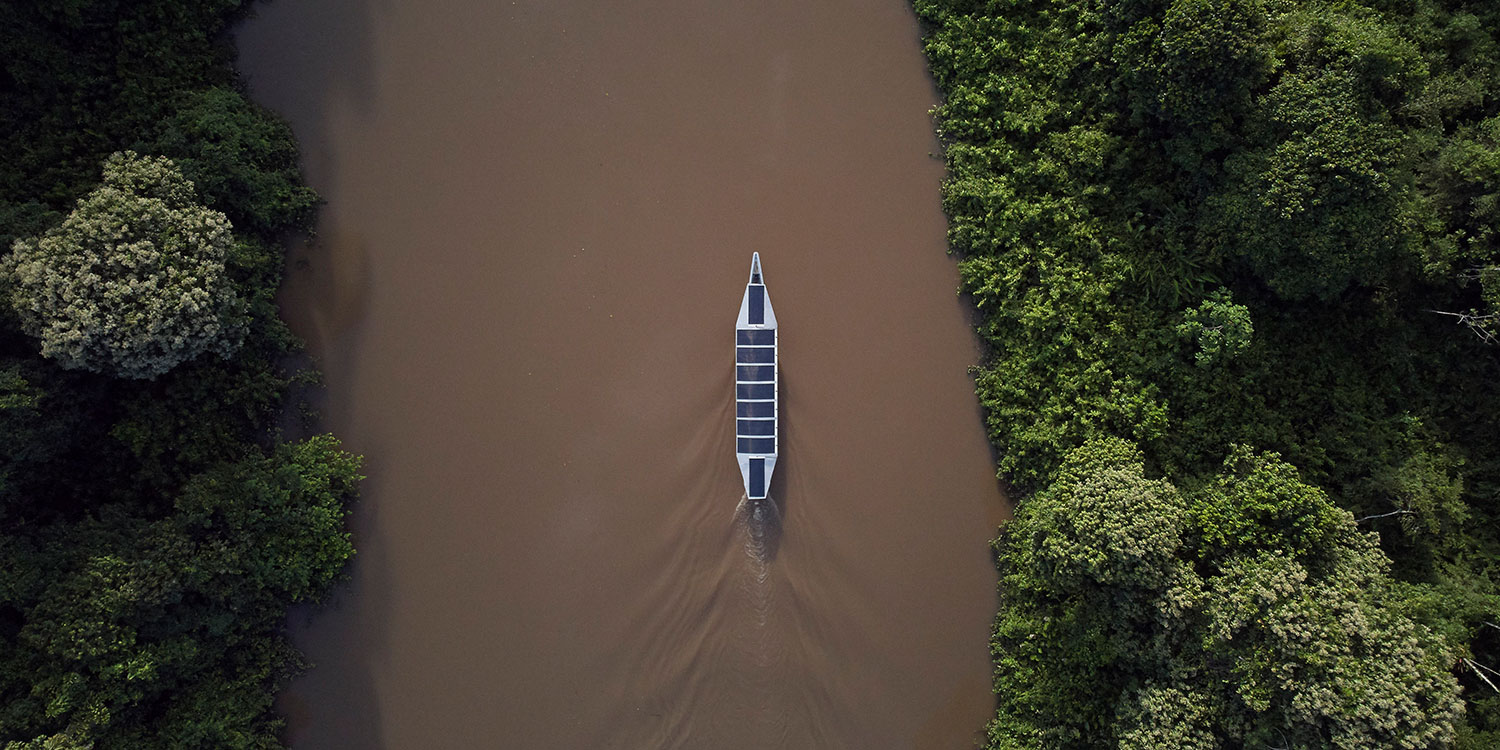 In the dream mythology of the Achuar, an indigenous people living in the Amazon region between Peru and Ecuador, there has always been the motif of a "fire canoe" heralding a new era. Since 2018, the Achuar have also had a real-life "fire canoe". That was when the first solar-powered electric boat was brought into service in the region. The boats, which are up to 16 metres long, are powered by Torqeedo Cruise 10.0 engines, with the energy coming from solar panels on the roof of each riverboat. Currently, the boats connect nine Achuar communities along 67 kilometres of the Pastaza and Capahuari rivers. "Here, everyone and everything is transported by water," says Oliver Utne of Kara Solar in an interview with the U.S. web magazine AJ+. "It's costly to fly in gasoline for internal combustion engines in small planes." Especially during the pandemic, when the Achuar area was closed and gasoline was hard to come by, the boats were critical to getting medicine and news to these communities. "It's important that we establish sustainable solutions in our region," says Agustín Tentets, president of the Achuar in Ecuador, "Not least to ensure our independence from big business."

Without our Cruise engine series, these six stories would probably not have been possible.

The Cruise series is characterized by robust design and a power range from 5 to 20 hp. The quiet Cruise pods, in combination with Torqeedo's lightweight lithium batteries, offer strong performance and require little space below deck.

In 2021, the 20-hp-equivalent Cruise top seller will receive a technical update: The TorqLink electronic communication system will allow faster and more accurate data exchange between system components. This is complemented by the new TorqLink throttle for the Cruise 10.0 system with a colour display. All important system data is displayed at the touch of a button and a continuously variable forward and reverse control is integrated in a high-tech design.