A solar-electric ferry connects the German island vacation paradise of Usedom to the mainland. Electromobility on the water strengthens ecotourism in the Baltic Sea - and thus an entire region.

When the "Antonia vom Kamp" enters the harbour, you can hardly tell. The 14.65-meter steel boat is one of the first electrically powered passenger ferries on the Baltic coast. Several times a day, it brings up to 20 people and 15 bicycles from the mainland to the island of Usedom – silently and free from local emissions. Solar cells sparkle on the roof and under the hood is a 60 kW Deep Blue electric azimuth thruster. The system is completed by two Deep Blue batteries with a total capacity of 80 kWh and a 4.3 kWp solar installation. The boatbuilders, Ostseestaal and Ampereship, estimate that the new solar-electric propulsion system will save twenty tonnes of CO2 every year.

"Morning guys!", Captain Sergejus Kostin greets us as he opens the boat's gates. Kostin, 25, is tall with a determined voice and firm handshake. You can tell that in his short professional life he has already steered ocean-going vessels across the Northern Atlantic and brought pilots aboard cargo ships in heavy wind and weather.

It is one of the electric ferry’s first trips in its first vacation season. All is still and quiet. Three men from Hamburg in tight cycling gear are boarding. They have been on the famous Berlin-Usedom cycle path for a week, they tell us, and the new ferry will save them a 30-kilometer detour. Solar energy fits in well with their eco-friendly cycling vacation. They enjoy the quiet beauty of the Anklamer Stadtbruch nature reserve during the crossing. This peaceful enjoyment of the natural world is part of what draws tourists to Usedom.

The electric ferry is ready for takeoff

The ferry's bridge looks like a high-tech ship with its many screens. Captain Kostin controls the boat and its steerable thruster by joystick. How does electric propulsion change the workflows on board? "Everything is much easier. You're ready for sea much faster," Kostin says as he settles into the helm. You have to warm up a diesel engine first, he says, sounding as if he’s recalling a stubborn donkey. "With the electric motor, on the other hand, you don't even notice that the engine is ready to start. It's that quiet," Kostin says. There’s no vibration, no fumes, and no roar that people have come to expect as a natural expression of horsepower. "But then you give it thrust and realize the power is really there." The Antonia vom Kamp operates at 8 km/h with a max speed of 15 km/h. 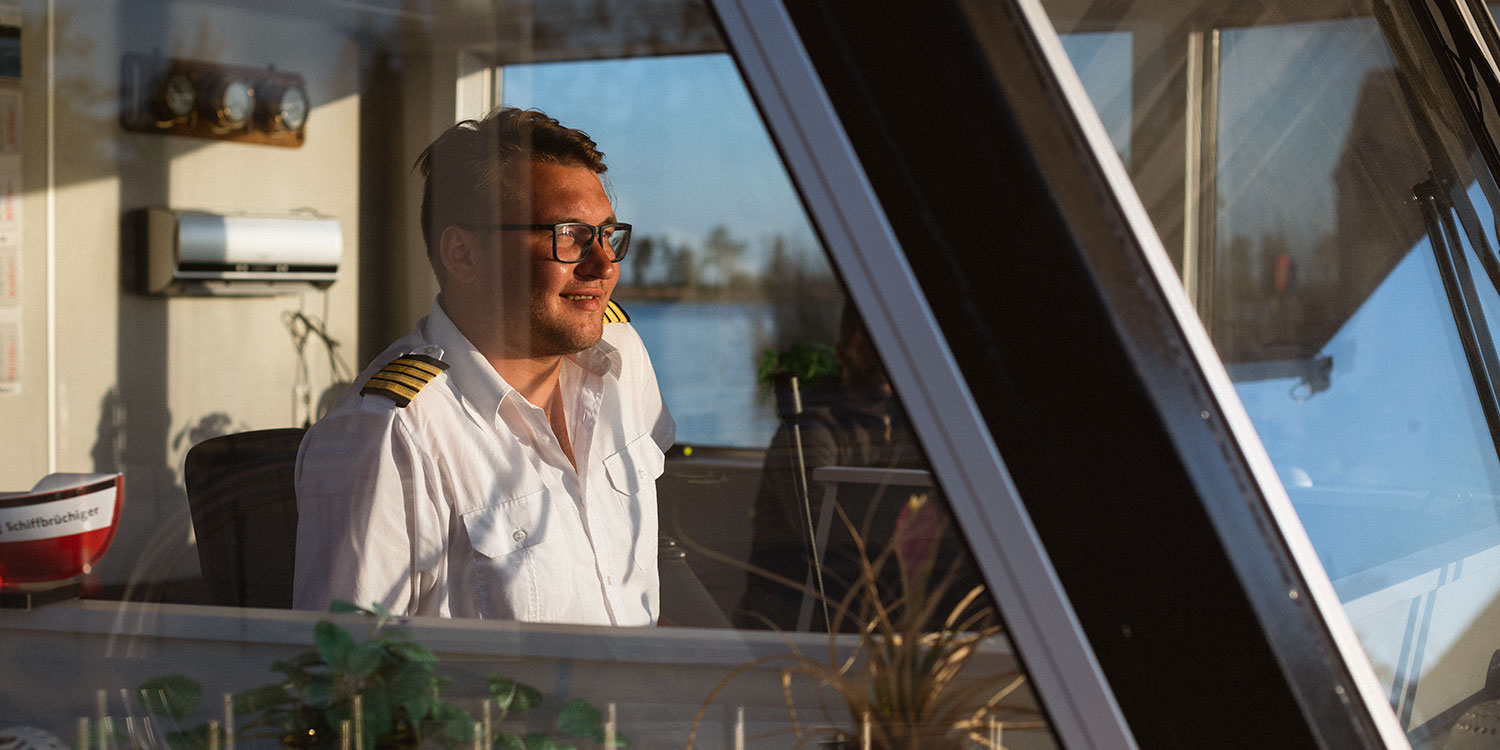 Captain Sergejus Kostin used to work on oceangoing ships and enjoys the quiet, instant power of the electric propulsion system.

And that is so true: The electric drive has a propulsive power comparable to an 80 hp engine that gulps a lot of diesel. The futuristic vehicle moves quickly away from the shore and glides through the glittering, rippled water toward Usedom. The distance from Kamp to Karnin is less than one kilometer, and yet it is a small journey through time, from one high-tech age to the next. On the way lies one of the region's greatest sights: the remains of the Karnin lift bridge. A monumental tower 35 meters high, it once lifted a section of the railroad bridge to allow ships to pass. Entire books were written about this "engineering masterpiece" built in 1933.

And now a new milestone in passenger transport is being set here: a climate-neutral ferry that is largely self-sufficient in electricity. "Because of the short journeys, we can cover our energy needs almost entirely with the photovoltaic system," says Kay Peters, managing director of the Oderhaff Reederei Peters GmbH & Co. KG, the company which operates the ferry. The prerequisite, of course, is that the sun shines, he says. But, says Peters, "The area with the most sunny days in Germany is known to be on the island of Usedom!"

Just as Kostin is a born captain, Peters is a born shipowner. He is, you quickly realize, fascinated by machinery. Whether it's the old vintage tractor on the Kamper shore or his new, state-of-the-art ferry. As a shipowner, he has to calculate every meter of travel both in terms of energy and financially. Peters enjoys doing that. "We need about 12,000 watts per day. On a sunny day, we will produce about 7,000 watts ourselves. We have to recharge the rest overnight," he calculates, adding, "That's about the equivalent of running five hair dryers for another hour."

The electric motor has other advantages for Peters. A diesel engine would continue to run at the landing site. For the shipowner, that's all lost energy and, therefore, lost money. "Electric motors, on the other hand, only ever need energy when the vessel is moving," Peters says. "Here we have no gearbox, no losses, nothing. The ongoing costs in terms of maintenance, oil changes, spare parts are much lower."

If you go below deck, you immediately realize what he means: there is not much to see in the steel belly of the "Antonia vom Kamp." Besides the two Deep Blue high-voltage batteries that power the motor, the largest objects below deck are a few beverage crates. The control system for the motor hardly takes up any space. 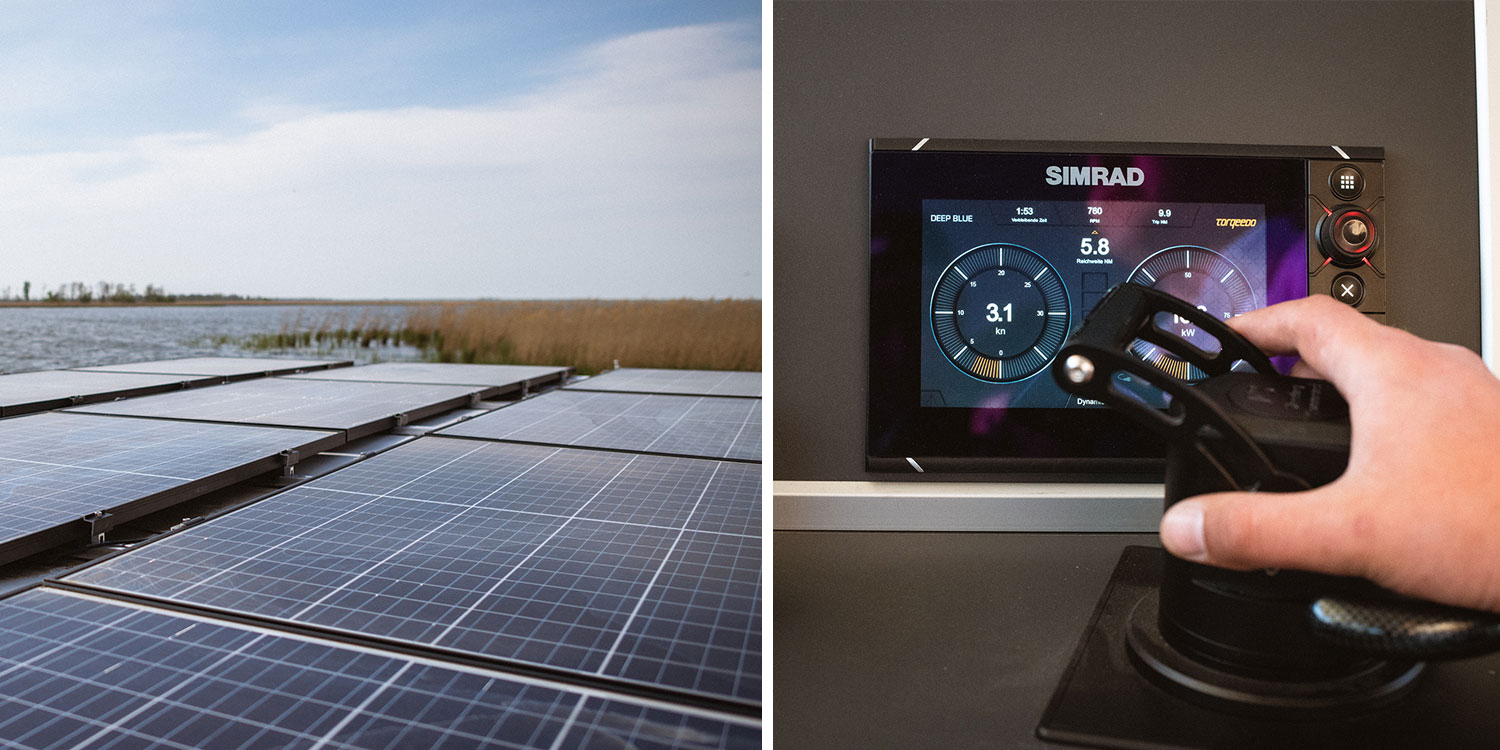 The boat is equipped with a 360-degree steerable azimuth thruster (rudder propeller) and has 13 solar modules delivering 4.3 kWp.

Driving during the day, charging at night - passenger ferries with clearly defined routes are particularly well suited for electric drives because energy requirements and range are predictable. "The shipping company also wanted to make excursion trips in the evenings, which means a bit more travel time than just the usual shuttle service," says Axel Büchling, sales manager at Torqeedo. Accordingly, the battery capacity for the ferry was increased. For each project, Torqeedo engineers find a solution that is both customized and robust so that there is always enough energy available.

The ferry operates in a special region. Surrounding the Baltic lagoon are the rolling hills of the island of Usedom and the nature reserves on the mainland. Vacation homes, cafes and nature attract countless tourists here every year. In such a place, a ferry is more than just a means of transport. And it was missing for a long time. 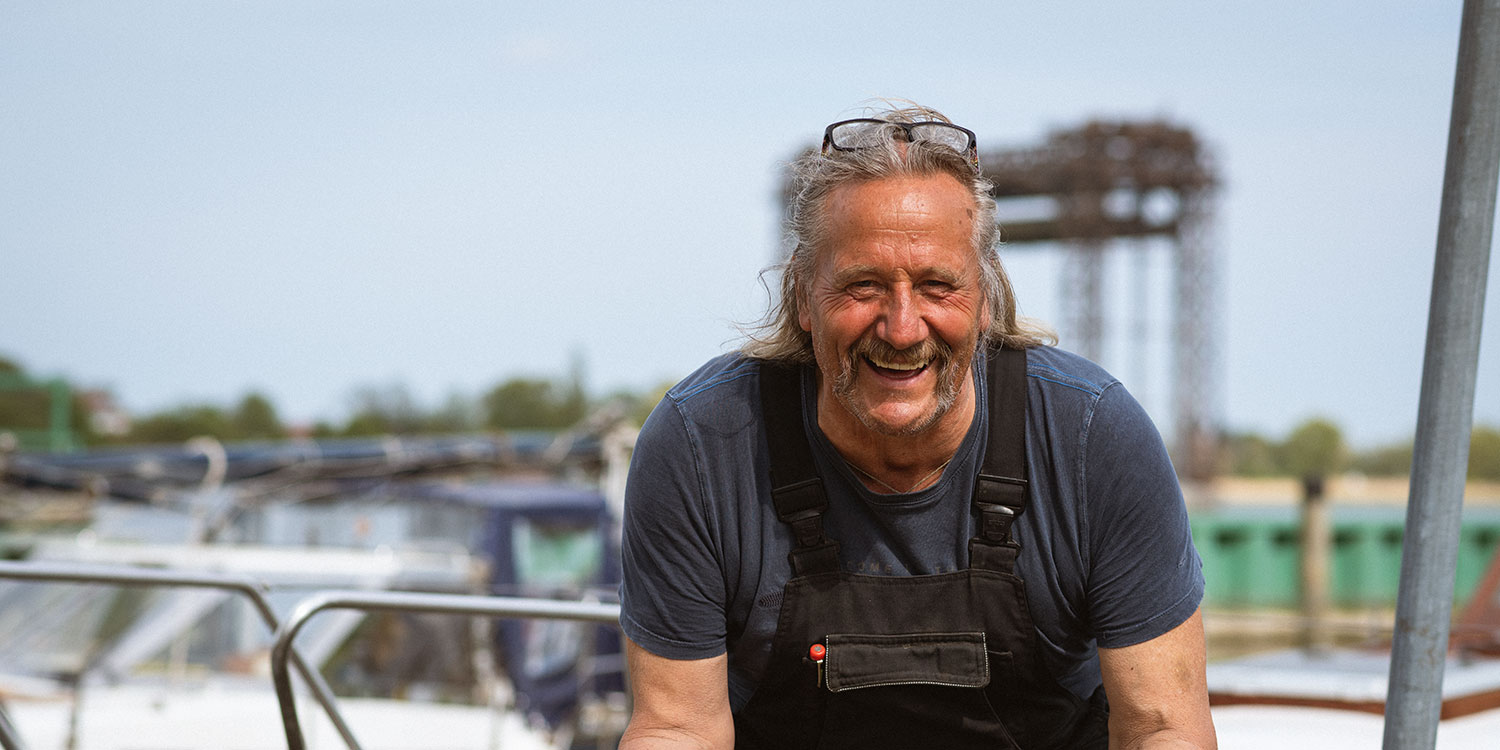 With their own hands: Siegfried Henck, a retired aircraft mechanic, rebuilt the historic harbour of Kamp with fellow citizens and pushed for an emission-free ferry.

The "village elder" arrives for the interview on his lawn mower. His name is Siegfried Henck. Better known as Sigi, and sometimes also as the "good soul" of the village. We are back in Kamp, the village on the mainland with 17 souls and 60 boats in the harbour. But Sigi doesn't just mow the lawn around the harbour. He also presides over the “Hafenverein”, the association that runs the historic harbour and restored it after German reunification in 1990. And without which the new ferry would probably not exist.

"Everything you can see here was created by our hands," Sigi says, looking over the harbour area. "The weeds used to grow two meters high here," says Sigi, who grew up in the village and was an aircraft mechanic in Anklam until he retired. They brought the crane they use to lower the boats into the water from Nuremberg's main train station in Bavaria, hundreds of miles away. A clubhouse full of model boats and fishing nets completes the harbour facility.

In the last two years, however, some people have lost their smiles. For a long time, an old diesel ferry ran between Kamp and Usedom, which at some point lost its operating license. "People still arrived on bicycles and wanted to get on the ferry. But then they realized: The ferry is gone. It was a disaster for our tourism; really tough." 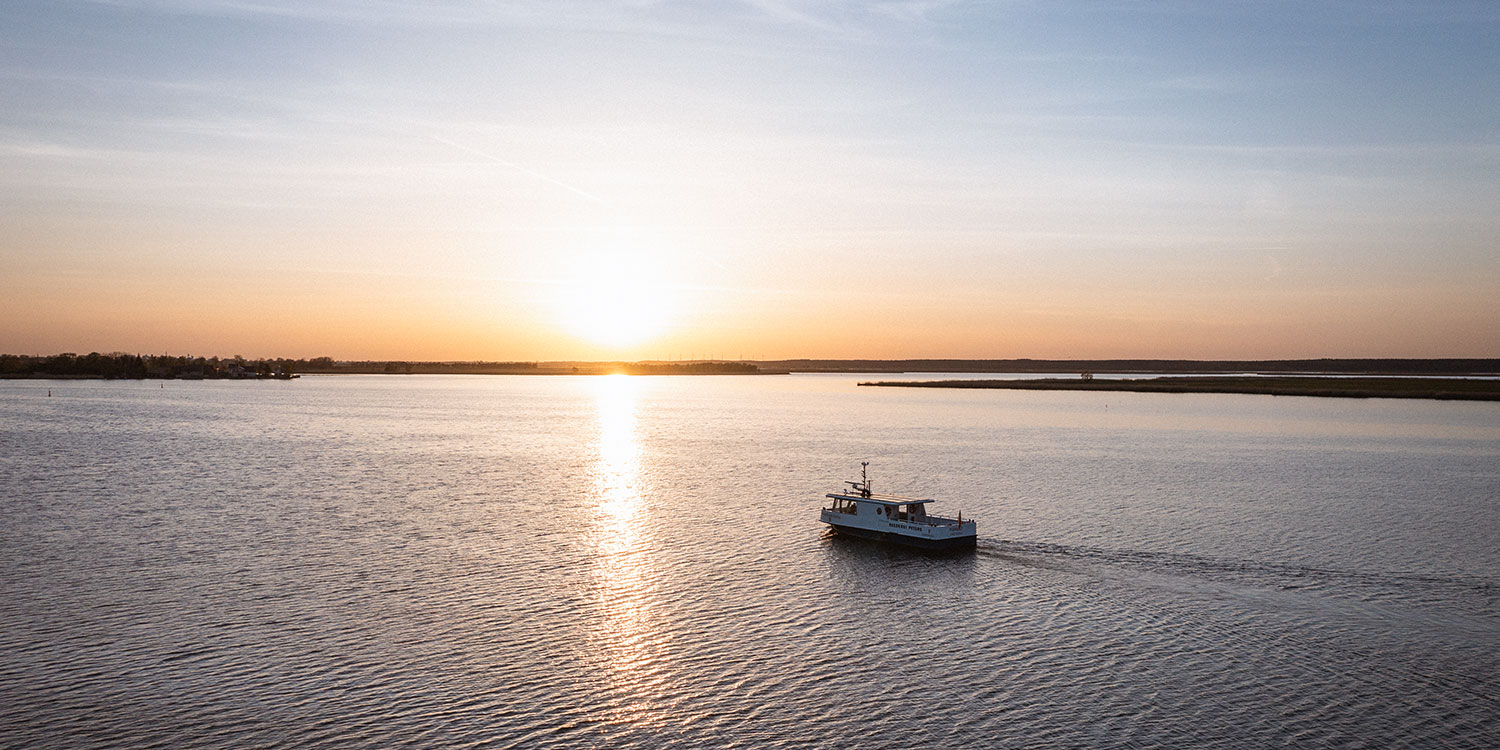 So, the association decided to organize a new ferry. The Oderhaff company and Kay Peters offered to take over the planning, construction and operation. It was also made possible by a grant from the state of Mecklenburg-Vorpommern.

"In many ports, especially in structurally weak areas, the infrastructure, i.e. charging stations, to recharge electric boats is often still lacking," says Matthias Schubert, director of project sales from Torqeedo. "But the political will is there to strengthen electromobility."

This will was also strong in Kamp and Karnin, where a new charging station was built and a special pier where the ferry docks independently with the help of a strong magnet. "That would have been just nonsense, [to build] something with diesel again," says Sigi," "For us, it's a nice thing when something so modern is built. No noise, no stench. That attracts people and shows them that something new will be built here in the future.”

Berlin’s ahead of the curve