Rising sea levels, traffic jams on the water and cruise ships - in the Lagoon City, new solutions to urban problems are being developed. This is the first of our series on the cities where the mobility of the future is being defined today.

1 m s.l.m. is one of Venice’s problems – and also its greatest locational advantage. The famous city on the lagoon is un metro sul livello del mare: one meter above sea level. The last major flood hit Venice in late autumn 2019, the most severe one in over 50 years. The water rose to almost 1.90 meters above sea level and 80 percent of the city area was flooded. The extent of the damage also exceeded all known records, with Mayor Luigi Brugnaro estimating it at more than €1 billion.

There is probably no other city in the world that is so emblematic of life on the water as Venice, where mobility on the water is as important for residents as for tourists. In 2019, 33 million tourists visited the lagoon city, many of them taking rides on the gondolas or water cabs through the canals. Add to that the 50 or so cruise ships that docked each year right next to St. Mark's Square. Traffic in the small city, now home to only 50,000 people, is close to gridlock. With the exception of the gondoliers, who mostly glide through the canals using muscle power, Venice's traffic is based on fossil-fuel powered boats. But numerous initiatives and entrepreneurs are now trying to develop new sustainable solutions for the city to improve the situation for its inhabitants and the environment. 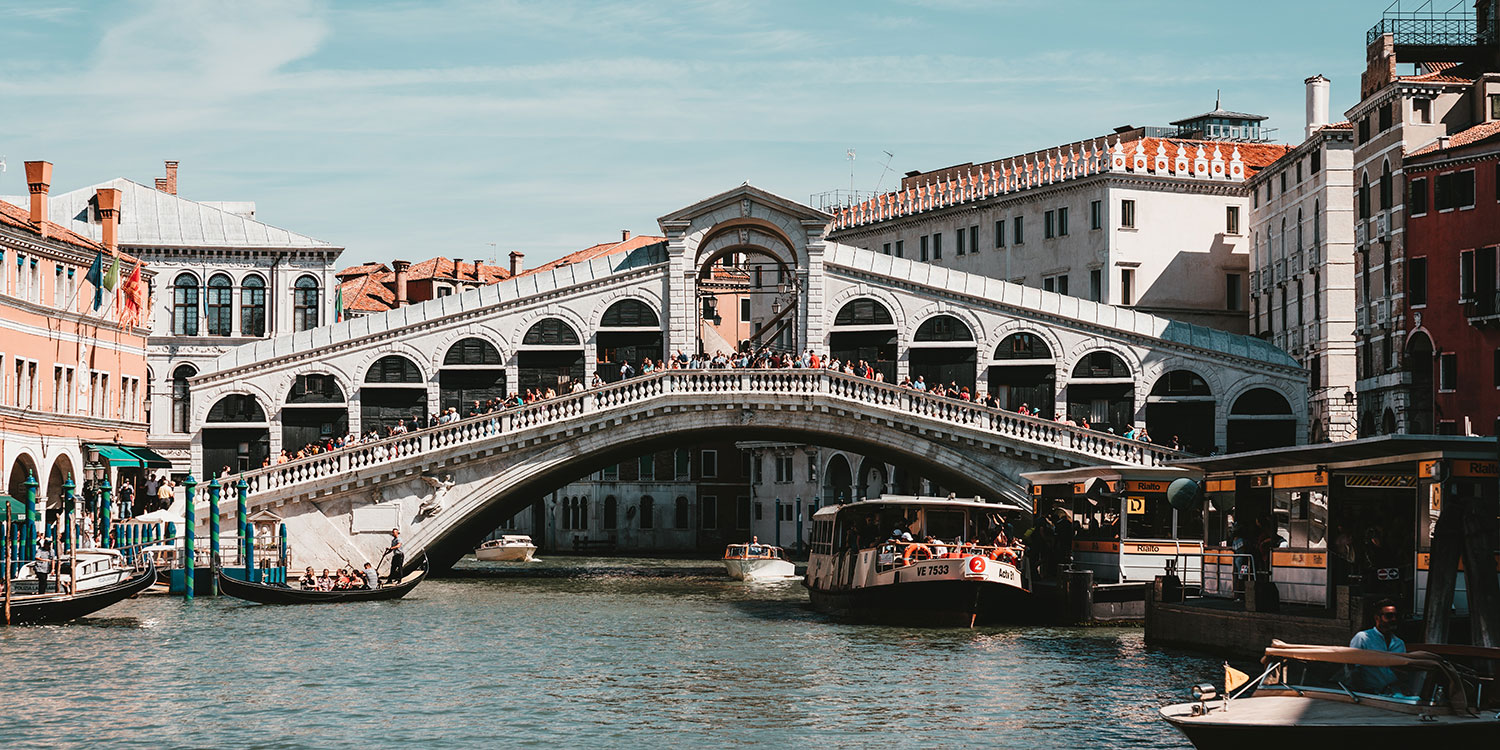 More than thirty-three million tourists visited Venice in 2019. The city needs the revenue, but suffers at the same time under the burden. (Credit: Unsplash)

One of these entrepreneurs is Jean-Paul Morselli, who runs Classic Boats Venice, an exclusive boat rental company. Since 2018, all the boats tourists rent to steer through the canals have been equipped with quiet, environmentally friendly Torqeedo engines. These Cruise outboards have only a small carbon footprint and the boats, either rebuilt in the traditional manner or carefully restored, have lost none of their romantic flair despite the high-tech propulsion. The Lady Betty, the oldest ship in the fleet, was christened way back in 1894. "The customers love it," says Jean-Paul Morselli. Before the pandemic, the rental boats were fully booked every day, so there is definitely a demand for a different kind of tourism that respects the inhabitants and the lagoon. “Torqeedo is the perfect partner for this,” says Morselli.

The Arsenale, an historic shipyard, will soon showcase the role Torqeedo plays in developing electric mobility on the water. This is where the Venetian Republic’s galleys were built hundreds of years ago, with 200 ships a year constructed in a complex division of labour. For centuries, the region’s wealth was based on these novel, unbeatable ship designs. And it is here that Salone Nautico Venezia begins at the end of May. The motto of the fledgling fair reflects its proud past: "Boatbuilding is coming back home".

One focus of the Salone Nautico, held at the historic Arsenale shipyard, is innovation in shipbuilding and new propulsion systems. (Credit: Salone Nautico Venezia)

Yet innovation in shipbuilding looks very different these days. The show’s guiding values are sustainability and better management of resources. One of the highlights of the program is a four-day e-regatta where all kinds of electrically powered boats can prove their competitiveness.

For some time, Venice Agenda 2028, the NGO organizing the e-regatta, has been calling for all vessels in the lagoon to be electrified. Numerous industry associations and companies have joined the initiative to call for sustainable mobility to fight global warming and sea level rise – including the electrification of everything from the tour boats, taxis, work barges and private yachts to the vaporetti, the city's water buses. The latter alone still burn over 21 million litres of diesel a year.

Torqeedo was an exhibitor at the first Salone Nautico and will again showcase its technology at this year's event, as well as entering a team in the e-regatta. "The Italian market is embracing the shift toward a lower emission future," says Gennaro Giliberti, Torqeedo’s key account sales manager for Italy. "It is the right time for Torqeedo to expand its presence in this extremely important shipbuilding market." Above all, he says, it is important to also convince commercial users of this future-oriented technology. There are more than 1,000 mototopi in the city, the typical motorboats used to deliver goods in the lagoon and the historic city centre. According to Giliberti, this is where the decarbonisation of Venice’s boat traffic will likely start. The infrastructure is the biggest obstacle to rapid change. "Venice is an ancient city, which makes the installation of fast charging points difficult," Giliberti explains. “But right now, some smart solutions are being developed to overcome this problem.” The plan is to turn a place whose demise has been predicted for years into a laboratory for the future.

Morselli and his rental company with its Torqeedo-powered boats are also working with other initiatives to help people understand Venice better. When visitors set off on the traditional Venetian sanpierota boats, the operators offer them a recommended itinerary. "They meet local fishermen, farmers and artisans and see places ignored by the conventional tours. But we have more than 120 islands in the lagoon," Morselli says. "Venice is so much more than the city centre."

After all, it's the centre that bears the brunt of the onslaught of tourists who, day after day, disembark from the cruise ships. In pre-pandemic times, these vessels towered high above the roofs of the ancient city palaces. Each of them emits as much CO2 daily as 84,000 cars. What's more, these huge ships’ bow waves are suspected of irreparably damaging the foundations of the city palaces that make up this World Heritage Site. 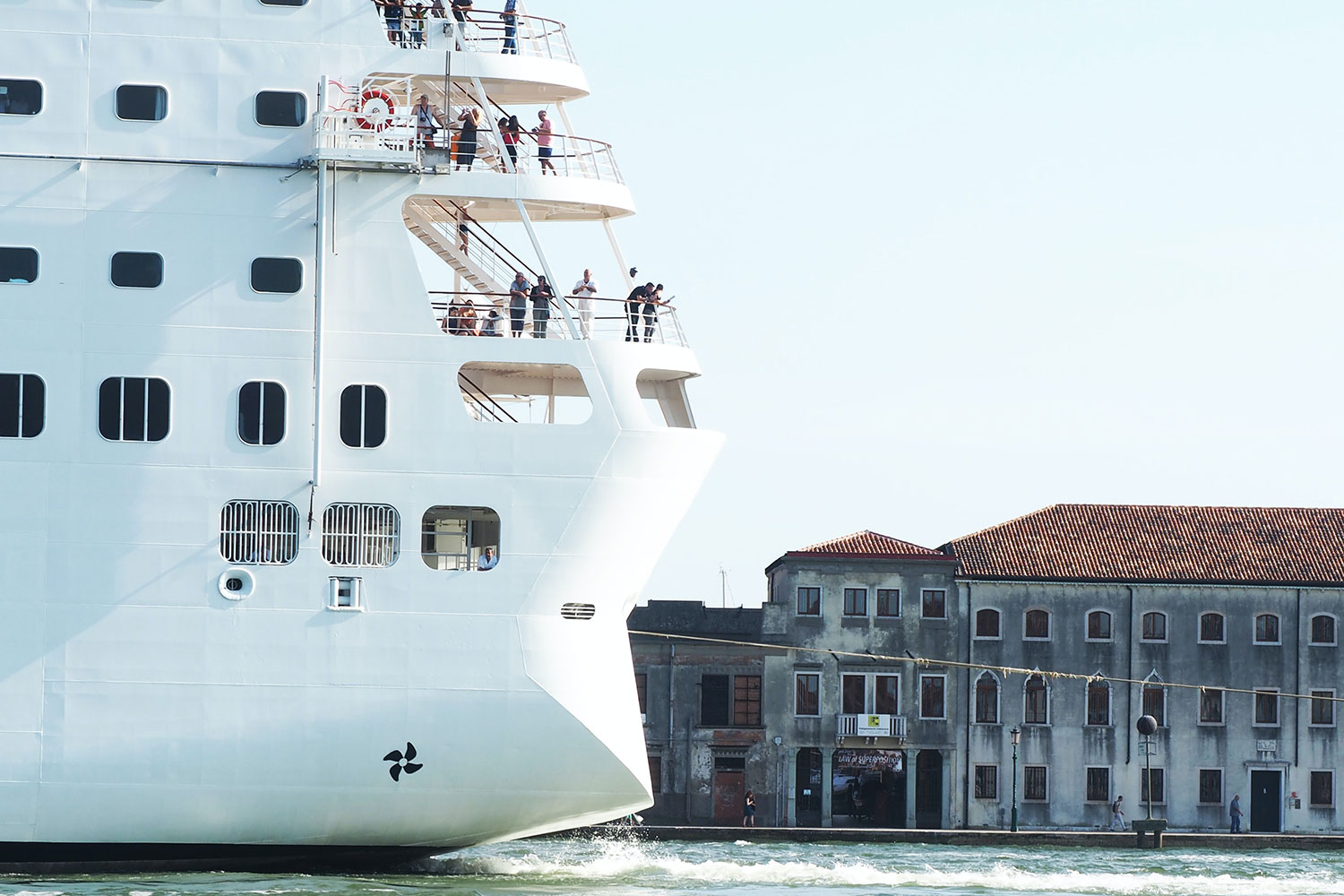 The canals had to be deepened for the cruise ships, which is why the storm tides threaten the city even more. In addition, each cruise ship emits as much CO2 as 84,000 cars every day. (Credit: Unsplash)

"In Venice, people honour the traditions of their city," says Torqeedo’s Gennaro Giliberti. This includes not only the canals and the historic buildings, but also the few cafés currently open for a cappuccino or a bellini.

The drink was invented not far from here in Harry's Bar, where the international jet-set once met. But Arrigo Cipriani, the second generation of the family to run the place, doesn't live in the past. He is one of the loudest voices calling for change. "The most important thing is to repopulate the city. Thirty years ago, we were 150,000 inhabitants; now just 50,000 are left. And of those I am the youngest," the 89-year-old remarks cynically. "A city is made of stones and people. Here, only the stones are left." Cipriani shapes economic facts into words: For too long, Venice lived on marketing its glorious past. His radical proposal has been the subject of passionate debate in the city over the past year: "Electric gondolas are the right solution for Venice because they are ecological, cause no local air or water pollution, and would facilitate mobility in Venice.”

For many Venetians merely discussing ideas is no longer enough. The past few years have seen the establishment of numerous citizens' initiatives that are trying in one way or another to rethink and shape the future of the city. We Are Here Venice (WAHV), an NGO, is campaigning for the renaturation of the lagoon, demonstrating to the establishment, which still relies on mass tourism, that the profits generated are actually rather low after maintenance and environmental costs are deducted. Among other things, they are currently working on a project to use the salt marshes surrounding Venice as a CO2 reservoir. Venice is a mirror of the world, says Jane da Mosto, environmental scientist and founder of WAHV: "A source of inspiration and a microcosm of many of the most pressing global challenges." 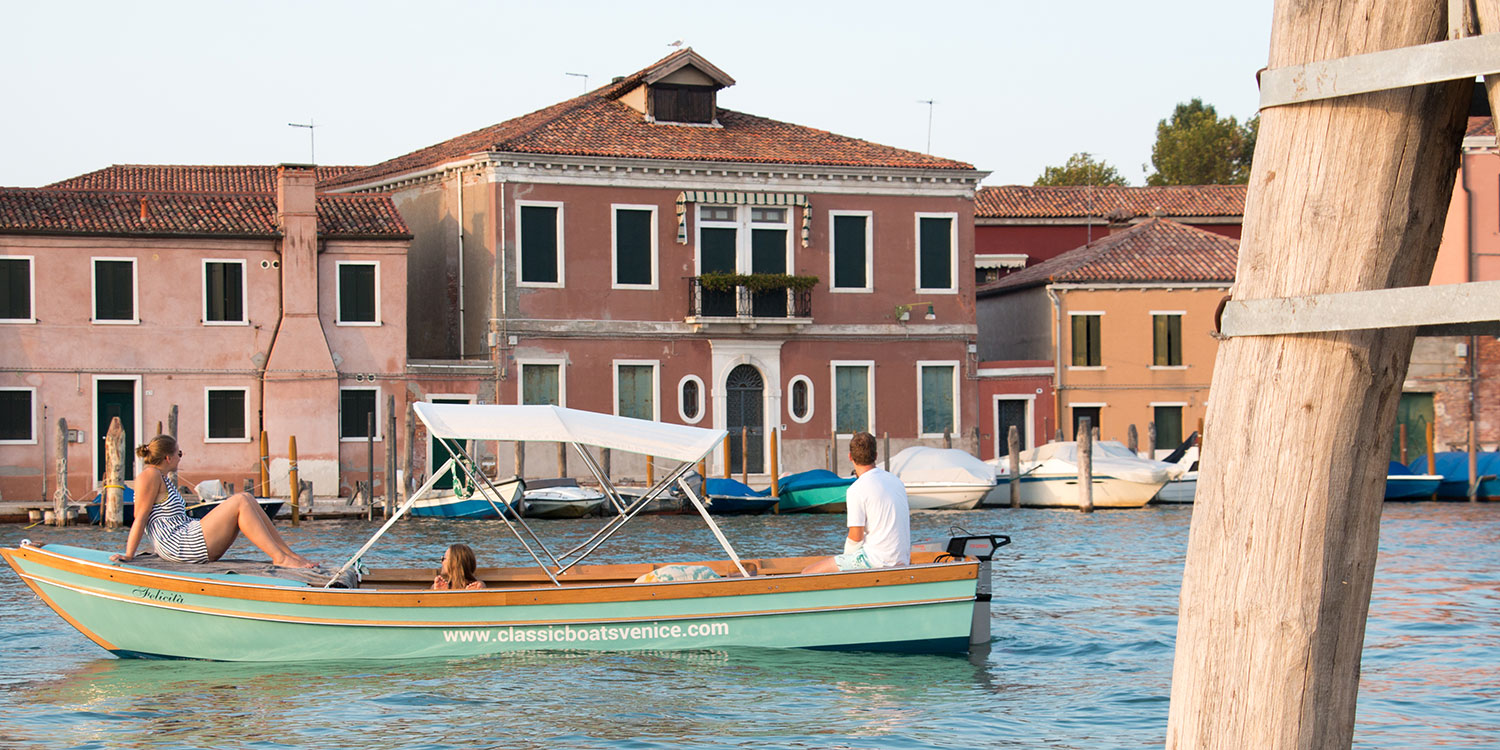 There is no shortage of solutions. For example, the housing platform fairbnb, which takes a more sustainable approach to the sharing economy, was founded in Venice and is now growing in other European cities like Barcelona and Amsterdam that are also suffering from the effects of overtourism. Other citizens are trying their hand at small-scale changes, e.g. the Row Venice initiative, an association that teaches interested people the traditional way of Venetian rowing. During the lockdown, they delivered much-needed supplies by water – a sustainable form of neighbourhood assistance.

The COVID-19 pandemic has given the city a bit of breathing space. The Italian government has put a temporary ban on cruise ships mooring in the old city. New berths are being sought, an ideas competition is being held, and €2.2 million has been put aside for this purpose. It is a difficult calculation: what is the maximum number of visitors to be allowed in so the city can become more livable, and to what extent should the masses of tourists be reduced so enough money can still be earned in a city where nearly two thirds of the people make their living from tourism?

With its Detourism project Venice is already trying to offer visitors an alternative travel experience and publishing maps that do not show St. Mark's Basilica and the Doge's Palace. This way, you can "experience Venice like a Venetian", so the creators’ enticing claim. After all, Venice is "the perfect city to get lost in".

Torqeedo expert Gennaro Giliberti is also confident that change is possible: "Italy has set out on a path to an emission-free future," he says. It's an opportunity for a fresh start.