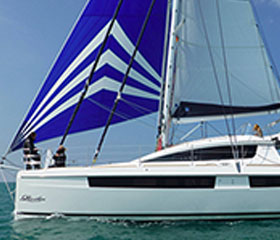 For long-range cruising, a 22 kW HV-DC converter generator is integrated into the system, which offers the same range as a yacht equipped with a combustion engine. It provides enough energy to power the motors and charge the batteries, if needed. As soon as the batteries are fully loaded, the generator turns off to offer quiet electric motoring for several hours per day at moderate cruising speed.

The combination of renewables, generator power and high-capacity BMW i battery storage allows owners to draw on an abundance of energy. Even air conditioning systems can be operated without running a generator at night. A fully charged system delivers 20 nautical miles of noise-free motoring at 5 knots speed.

Deep Blue Hybrid‘s 9-year battery limited warranty and worldwide service network are also essential advantages for Privilege yachts cruising the world. Peter Went, future owner of “Le Penseur”, the first yacht of the Privilege Series 5 Hybrid Catamaran, is particularly fond of the Torqeedo system: “The game-changer for me, looking at an integrated power system, is the hydrogeneration capability.” The yacht will be launched in early 2018.

Gilles Wagner, CEO of Privilege Marine, states that Privilege chose Torqeedo’s Deep Blue Hybrid based on its remarkable industrial development: “Torqeedo has now lifted hybrid technology to a professional, industrial level by delivering an integrated system from one source.”

Privilege Marine was recently acquired by Aurelius, the parent company of Hanse Yachts. Last autumn, Hanse and Torqeedo announced the Rudder Drive, another innovative propulsion system which replaces diesel engine, thruster and saildrive for sailboats up to 40'. The Rudder Drive was the first time a large-scale yacht manufacturer has offered an industrially produced electric drive system as a factory option.