In Marineterrein Amsterdam Living Lab, the open-air laboratory of the Amsterdam Institute for Advanced Metropolitan Solutions (AMS Institute), researchers successfully tested Roboat, an autonomous "robotic boat" fitted with Torqeedo electric drives. The mobility revolution for the climate-friendly city of the future will include new ways to move people, products – and even rubbish. Before long, Roboat could be assisting in Amsterdam's waste collection service – then transform cities worldwide.

Ynse Deinema is smiling proudly. He resolutely grabs a black refuse bag, energetically strides toward the quay wall, and throws the bag into the black hatch of a compact metal boat moored to the wall of the test basin next to AMS Institute´s home base in Amsterdam. The bag slides in and the hatch closes again. The 34-year-old's blue eyes light up: "Isn't that great?" Ynse is the AMS project coordinator of Roboat, an autonomous electric-powered boat.

Ynse studied neuro science, holds a master in management and entrepreneurship and was always "crazy about boats", he says. A passionate yachtsman, he discovered his love for robotics at Delft Technical University. While Roboat is quietly moving around the test basin with its "prey", the refuse bag, Ynse's colleagues are observing everything from a laptop on the quay.

"You only have to tell it where it should go. It does all the rest itself," Ynse says as he looks across the water where Roboat is circling in an emission-free, almost elegant way. He almost sounds like a father whose child has just taken their first steps. Today, he points out, is the end of a five-year learning and testing phase in which his team of engineers developed Roboat. "Of course, I'm proud," he says, "it was hard work and a team effort."

Roboat is still a prototype, but Amsterdam's narrow, crowded canals are an ideal testing place for autonomous boats.

To navigate autonomously and collision-free, Roboat uses sensors and cameras with a 360° field of vision. This "awareness equipment" enables Roboat to learn and understand its surroundings. When Roboat senses a new object like a canoe, the algorithm flags the object as "unknown". Later, the team view the data, manually select this object, and name it "canoe". The algorithm is being gradually trained to be faster and more accurate than even the human eye.

Then, a swimmer climbs into the water. That wasn't part of the plan. Ynse's colleagues shout to the swimmer that a demonstration is underway, but the elderly gentleman isn't the slightest bit interested. He swears at them and continues his swim. But even a swimmer can't spoil this wonderful day. For safety's sake, he warns his team. Some human control won't do any harm. After all, the algorithm is still practicing.

Roboat is already so advanced that the next phase of the project is ready to start – its commercialization. It only seems to be a matter of days before Roboat joins the ranks of Amsterdam's refuse collection service. Passenger transport deployments are also planned. Torqeedo sponsored the thrusters of the boat. "Here at Torqeedo we see huge potential. The combination of electrical engineering and automation offers enormous opportunities," says Lukas Timcke, an applications engineer at Torqeedo.

A few legal issues need to be clarified before Roboat is allowed to travel round Amsterdam's canals, but the AMS project coordinator is not worried: "We are working very closely with the Amsterdam authorities. The Netherlands is proactively dialoguing with researchers and companies about climate-friendly innovations for urban areas," he explains. 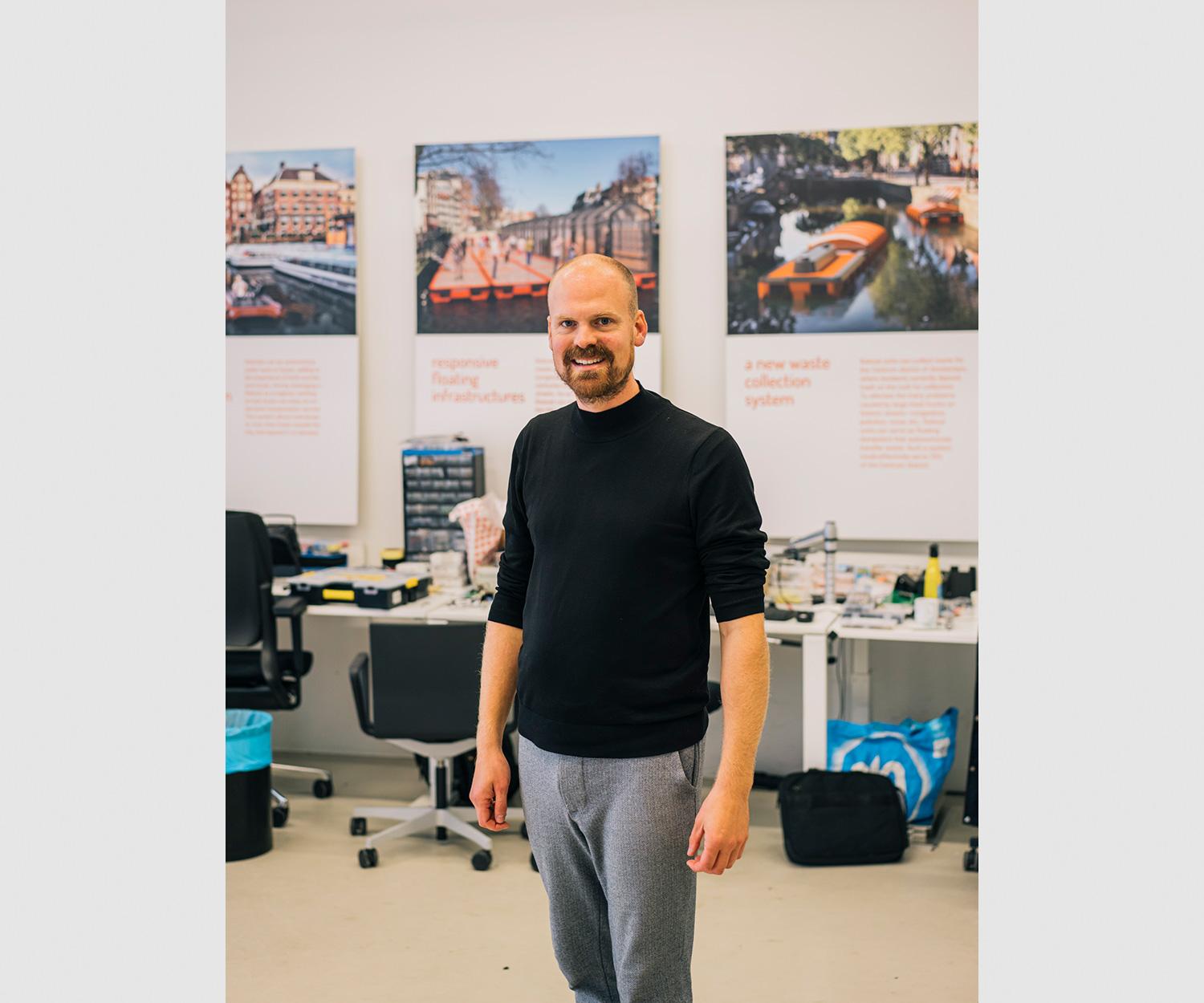 Ynse Deinema heads the Roboat prototype project at AMS. All boats operating in the Amsterdam metropolitan area will be converted to electric engines by 2025.

The Dutch are not only masters of finding a consensus amongst different stakeholders; they are also under great pressure to act. The geography of the Netherlands, where a quarter of the land lies under sea level, forces the country to work on advanced solutions – and not just since sea levels have started rising.

In earlier times, Amsterdam's canals were extensively used to transport goods and people, but this became less important during the 20th century. Nowadays, it is primarily sightseers who travel on the grachten – purely for pleasure. But as city centres worldwide become ever more populated, planners recognize the potential of waterways to relieve the congestion on streets. The aim is for Roboat to revive this potential.

"In the future, autonomous e-boats will be able to solve a lot of problems in modern cities," Alexander Oswald says, Director Application Engineering at Torqeedo. “There are numerous application areas. This emission-free, space-saving technology could lead to enormous cost and time savings. Goods deliveries, public transport, and data collection are potential applications.”

Anyone who thinks this sounds like a far-off future scenario only needs to take a closer look at what is happening in Amsterdam. This city is a live lab for the future of e-mobility on the water and was one of the first cities to pursue a “doughnut economics” model. Developed by the British economist Kate Raworth, doughnut economics defines the conditions for a sustainable economy. The scope for economic activity is determined by existing ecological and social boundaries, and the visualization looks like a doughnut. 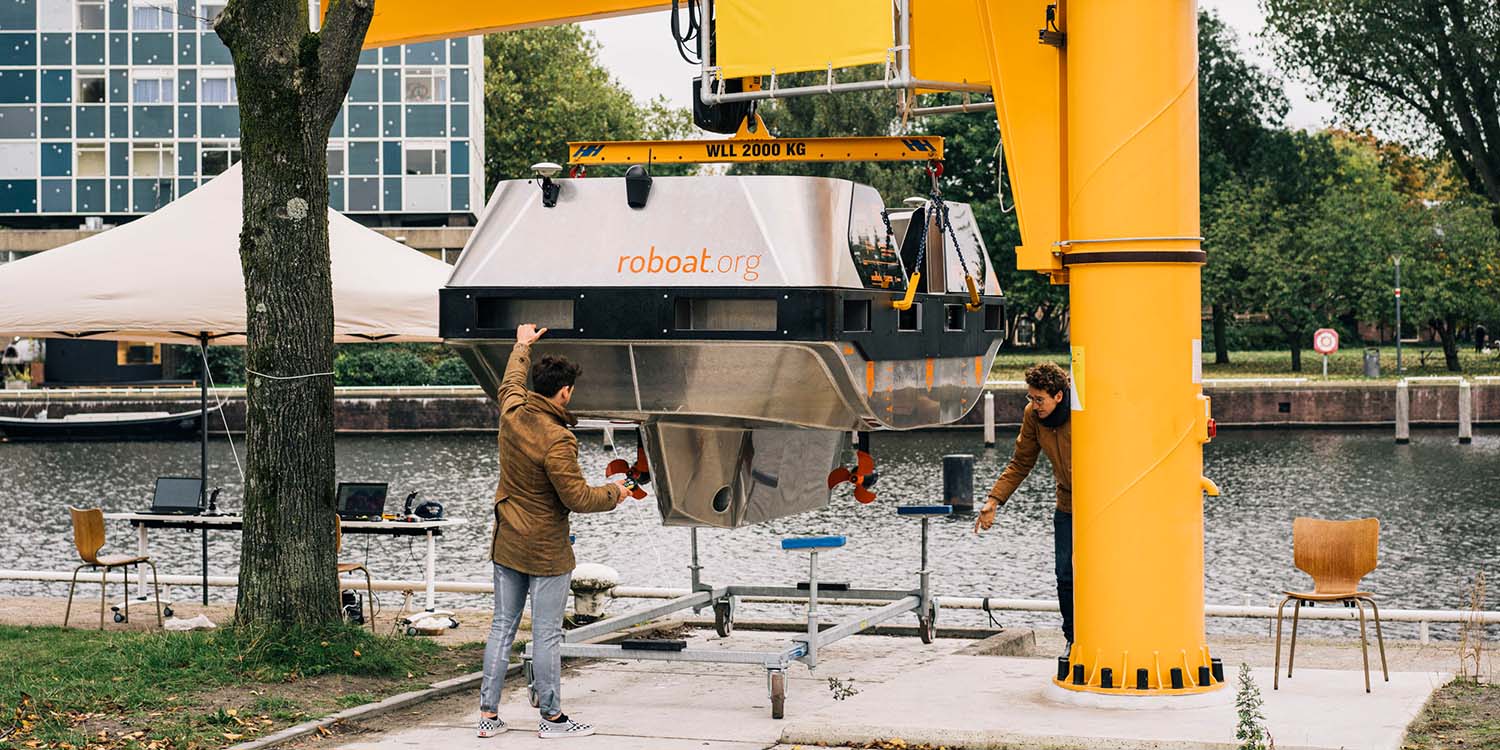 Roboat is propelled by two Torqeedo Cruise motors that can maneuver the vessel 360° in any direction.

Amsterdam’s Deputy Mayor Marieke van Doorninck is driving the remodeling of the city in this direction. She aims to establish both the circular, or doughnut, economy and self-sufficiency in resources. “The great thing about doughnut economics is that it offers a comprehensive framework in which ecological and social goals concur,” Marieke says. From 2030, only e-boats will be permitted on Amsterdam’s canals. By 2050, the city wants to be self-sufficient in terms of external resources.

Marieke van Doorninck seems absolutely determined to make her city more livable. Roboat can play a very practical role in this, as combustion-powered refuse trucks cause traffic jams in the narrow streets of the Old City, emit dirty exhaust gases, and damage the historic bridges and buildings along the canals. Amsterdam’s infrastructure is from the 17th century and not designed for the challenges of a modern city with 800,000 inhabitants plus the up to 20 million tourists that stream in each year. The quality of the city’s air also needs to be radically improved. Even minor changes in a metropole’s mobility behaviour can make a big difference, as shown by the results of a study commissioned by the European Public Health Alliance (EPHA), undertaken by the renowned Dutch research and consultancy institute CE Delft, and published in 2020.

Carlo Ratti, Roboat research head and involved at AMS Institute since the beginning, is an expert in the developments that will shape the cities of the future and is the great thinker behind the project. An architecture and engineering graduate, he is now a professor at the renowned Massachusetts Institute of Technology (MIT), works as a designer and an entrepreneur, and commutes between New York, Singapore, Boston, and Turin. He brings his expertise to bear on one issue: sustainable urban concepts for the future. 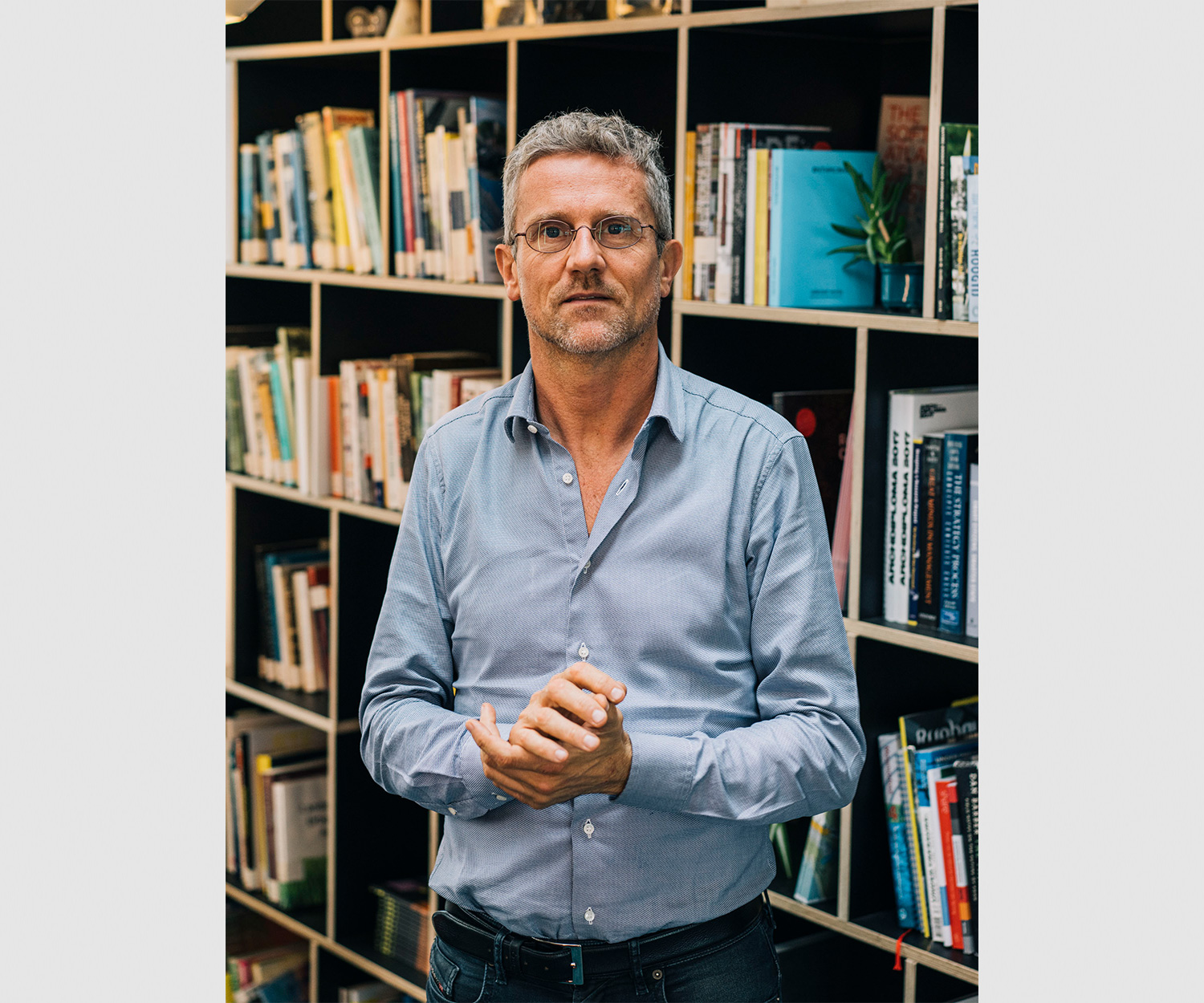 Carlo Ratti is a professor at MIT in Boston, where he heads the Senseable City Lab. In his function as a scientific partner, Carlo researches new mobility concepts all over the world.

"What we see here today is the outcome of a great deal of thinking. For five years, we carried out research, conducted trials, and built prototypes. It’s great to see that Roboat really works. It’s our baby,” says the 50-year-old Italian. Eventually, Roboat will transport not only refuse or freight but also people, acting as a mini-ferry or water taxi.

Next to Crystal 2, the Roboat for collecting garbage, lies Lucy 1, the prototype for transporting people – with room for five passengers. The open-air trial run in the test basin can begin. Roboat accelerates surprisingly quickly and manoeuvres in an agile fashion. The trip is pleasantly peaceful, a little timeout on the water, nice and relaxing.

“And that’s not all,” Carlo Ratti adds. "You can view Roboat as a floating pixel, as a dynamic element of urban architecture with which you can build a bridge or a floating stage. After all, several Roboats can be joined together via a lateral latching mechanism. If you include the waters of a city in your thinking, a new urban infrastructure emerges.”

Anyone who has attempted to manoeuvre a motorboat through Amsterdam’s narrow and crowded canals knows that it’s “careful as you go”. But Carlo doesn’t think the people of Amsterdam will be sceptical about sharing their canals with autonomous boats: “During the recent tests on autonomous cars in Singapore, we saw that people were open to this idea once they had the chance to try those things out themselves. So we’ve got to take people with us on our journey, so they get to know the technology. We’ve got to demonstrate the technology.”

In many cities there are more waterways than asphalt roads. Developing and using these waterways will be increasingly significant in a sustainable future.

Other cities such as Venice, Dubai and Stockholm are also interested in Roboat, Carlo points out. More and more mayors are deciding to achieve or even exceed the EU’s climate and energy goals. Nearly 11,000 towns and cities from 53 countries have already joined the Global Covenant of Mayors for Climate & Energy, and the number is growing all the time. There is hope for our climate and our cities. Projects like Roboat are showing us the way ahead.