In the Ecuadorian Amazon, a collaboration between the indigenous Achuar community, the Kara Solar Foundation and Torqeedo have made a vision into a reality: solar-powered river transportation.

The narrow, 16-meter-long vessel with a solar-panelled roof and two electric motors must have seemed otherworldly as it started its first voyage on the Aguarico River, near the centre of Ecuador's oil industry, back in 2017. But as the solar canoe moved south through the Amazon rainforest, the promise of the boat and the symbolism of its maiden journey became apparent. Christened Tapiatpia, the boat was named after a giant electric eel which, according to legend, once lived in the Amazonian rivers and transported animals on its back.

The nine passengers on board the Tapiatpia left the sights, sounds and smell of oil and gas extraction behind as they made their way toward the pristine territory of the Achuar, a group of indigenous peoples who live in a remote area of Ecuador and Peru. They were left with a simple question: Could the Tapiatpia help the Achuar preserve their environment and their way of life?

The solar panels on the roof of the slender, 16-meter boats deliver enough power for them to run for three to six hours after sunset. Credit: Kara Solar

The Kara Solar Foundation is the non-profit organisation behind the solar canoe. In the Achuar language, Kara means "a dream that comes true". Since 2012, a team of engineers and designers has been working with the Achuar community to realise their dream of solar-powered transportation in the Amazon. They carefully picked and planned every component of the system: the two electric Torqeedo Cruise motors, the batteries, the solar panels.

Oliver Utne came to Ecuador as a tourist and stayed to work with the Achuar community. He saw the potential of solar power to help preserve the Amazon, a remote location with lots of sunlight and a growing need for energy. Unlike other electric boat systems in the Amazon, this solar canoe does not depend on recharging stations. With its full canopy of solar panels and onboard battery bank, it can even run for three to six hours at night.

Utne recalls Tapiatpia’s first trip: "We had raced to meet a deadline and stayed up all night making the final connections. Despite the tiredness and stress, it was such a magical moment."

A new mode of transport

For generations, the Achuar maintained a nomadic lifestyle. Now, they live in permanent settlements and there is a constant flow of people and goods on the rivers. Many boats still run on fossil fuels, polluting the water and disturbing hunting and fishing. Fuel is also costly as it needs to be flown in or transported long distances by boat, which also burns fuel — a vicious cycle.

For decades, the oil and gas industry has been building roads to support fossil fuel extraction deeper and deeper into the Amazon Rainforest. Around 17 per cent of the forest has been lost in the last 50 years. Deforestation is not only a severe biodiversity problem; it also worsens the climate crisis by reducing the Amazon’s capacity to absorb carbon from the atmosphere.

Indigenous groups in the Amazon have lived under the threat of the oil industry since oil was discovered in Ecuador in the 1950s. One of the closest airports to the Achuar territory is in a town called Shell. The oil company named it.

Now, the industry is moving south towards Achuar territory. “They’re expanding their oil wells. They’re stealing from us without us noticing. That’s why we’re now standing up to defend what’s ours, our territories, our way of life,” says Nantu Canelos, a member of the Achuar community and Kara Solar’s Field Coordinator.

The Achuar have unequivocally rejected oil and gas extraction in their homelands. But the temptation was real. After all, their boats still ran on fossil fuels, and the roads and bridges the oil companies would build could increase access to education and health care.

"When the Achuar saw the potential of transportation based on something other than gas, they saw it as something practical and as something symbolic,” Oliver Utne explains.

The first step towards an alternative infrastructure

Three solar-powered electric canoes now travel the region’s rivers. "Tapiatpia was the first step towards an alternative infrastructure for the Amazon," Utne explains. He envisions an entirely emission-free solar transportation system that will further strengthen the links between the different Achuar groups and build a sustainable economy without destroying the region’s natural and cultural heritage. The Achuar are already taking advantage of new opportunities with an ecotourism project and a balanced food project using a solar power plant.

The ancestral land of the Achuar comprises 2 million hectares of dense forest on the border between Ecuador and Peru. Credit: Kara Solar

The solar canoe systems have evolved over the years. "It's been a trial-and-error process,” Oliver Utne says. Kara Solar conducted studies to identify the most navigable parts of the river. The Achuar leadership decided to start with 67 km of the Pastaza and Capahuari Rivers that connects nine Achuar groupings. Torqeedo motors are famously durable and easy to use, but floods, currents, whirlpools, and underwater obstacles mean the ability to perform fast, on-site repairs are critical to the project's success.

Initially, Kara Solar brought in external technicians. “After a while, we put much more emphasis on developing a local group,” Oliver Utne says. They ran hands-on training and learning-by-doing sessions, drawing inspiration from Torqeedo YouTube videos to teach engineering in an accessible way. Kara Solar also organised exchange programs with other indigenous technicians across the Amazon. Now, they have seven technical specialists from the Achuar community on the payroll, and they know all the canoes' parts by heart – every single connection, every wire, every detail. “If I train a local team, not only will the boat do well, but there will also be new projects created in the same place,” he points out. The local team Kara Solar has trained is installing solar pumps, lighting, and radio systems. “They’ve become the technical wizards in this area.” 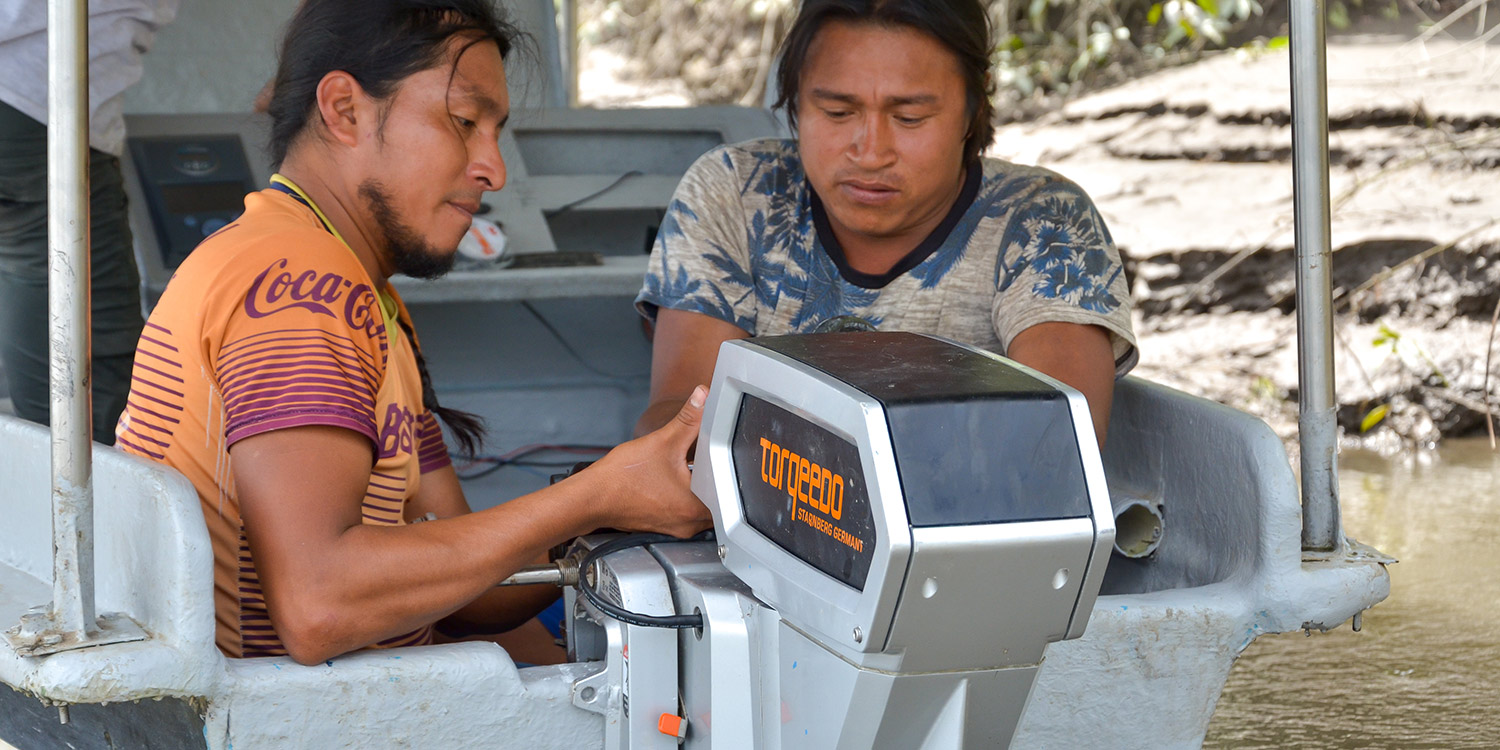 Since the region is so remote, the Kara Solar Foundation trained local technicians in all things solar and electric. Credit: Hana Begovic

Right now, four Achuar communities enjoy regular, weekly visits from the solar canoes. "Now that we’ve consolidated and gotten reliable in a smaller area, we’re starting to expand”, Oliver Utne explains. They had just finished refining the boats when the Covid-19 pandemic hit. The months-long shutdown meant no gasoline was coming in, so the solar canoes were the only reliable way for people to move around. They proved crucial for farming, food supplies, and taking people to health clinics and schools.

"The project has become a central service", says Nantu Canelos, "we live on the banks of the river Pastaza, but the orchards are located elsewhere along the river, so the boat routes are vital for our local economy." The boats, he adds, also fulfil an essential "social function": The Achuar have retained an assembly-based way of decision-making, meeting in large communal houses to discuss urgent matters, such as how to react to a road project in the area. The canoes enable movement, connections, and democratic discourse. Since the pandemic began, Kara Solar has provided over 200 trips with an average length of 12 kilometres. The impact is measurable.

Indigenous groups are often the first to bear the brunt of climate change. The Achuar are at the forefront of this global crisis as they try to protect the Amazon Rainforest with the support of projects like Kara Solar. As Oliver Utne puts it, “When the Achuar see a future in their homeland, they’ll protect the forest. The planet depends on that.”

Sailing the Seven Seas for 20 years