The tour boats that crisscross the canals and rivers of Berlin are not only popular with locals and tourists; they are also noisy and harmful to the climate and human health. Now Torqeedo has equipped the first water taxi in Berlin with a powerful Deep Blue electric motor, and suddenly, you can hear the sound of lapping water, even in the middle of the big city. A test drive.

The Oranje Nassau is one of dozens of canal boats that ply Berlin’s canals: flat, just under 20 meters long, and elegantly shaped. A real beauty, no doubt! But it attracts attention because it doesn’t attract attention in Berlin’s hectic city life. Unlike the other passenger boats, it has no rumbling diesel engine and does not emit dark clouds of smoke. Instead, it glides silently back and forth between Berlin’s large urban park, the Tiergarten, the German parliament and the world-famous art collections on Museum Island. Visitors see the city from its best angle – from the water.

The German capital has eleven navigable waterways totalling two hundred kilometers, with the Spree and Havel Rivers and the famous Landwehr Canal flowing through its trendy neighbourhoods. But the traffic on these beautiful waterways comes with a cost. When the Berlin Senate measured the fine particle pollution caused by fossil-fuel-powered urban water transportation in Berlin a few years ago, the concentration of fine particles on the inner-city banks of the Spree was up to 15 times higher than the legal limit. According to the WHO, this is a serious burden on human health; the tiny pollutant particles cause respiratory and cardiovascular diseases. According to the Berlin Senate Administration, boat traffic causes around ten per cent of soot particle emissions - as much as 120,000 cars.

And this is where the Oranje Nassau, the low-key game-changer, comes in. The beating heart of the revolution, a Torqeedo Deep Blue electric motor, operates silently below the canal boat’s deck. And it is precisely this silence that is its strength.

On a spring morning, just before 9 a.m., the Oranje Nassau docks at the Schlossbrücke " boat stopin the middle of the city. You can hear – nothing. And you can smell – nothing. All is quiet: the boat, the river, the city. There are still hardly any tourists and business people out on the streets, and the usually bustling Museum Island is deserted. Only a few commuters on e-bikes and bicycles are rushing to work. At the same time, the yellow buses of Berlin’s public transportation system, which are also increasingly electrified, are heading toward Brandenburg Gate. Only a single high-voltage cable in the old exhaust pipe at the boat’s bow reveals to attentive onlookers that an electric motor is at work on the Oranje Nassau. 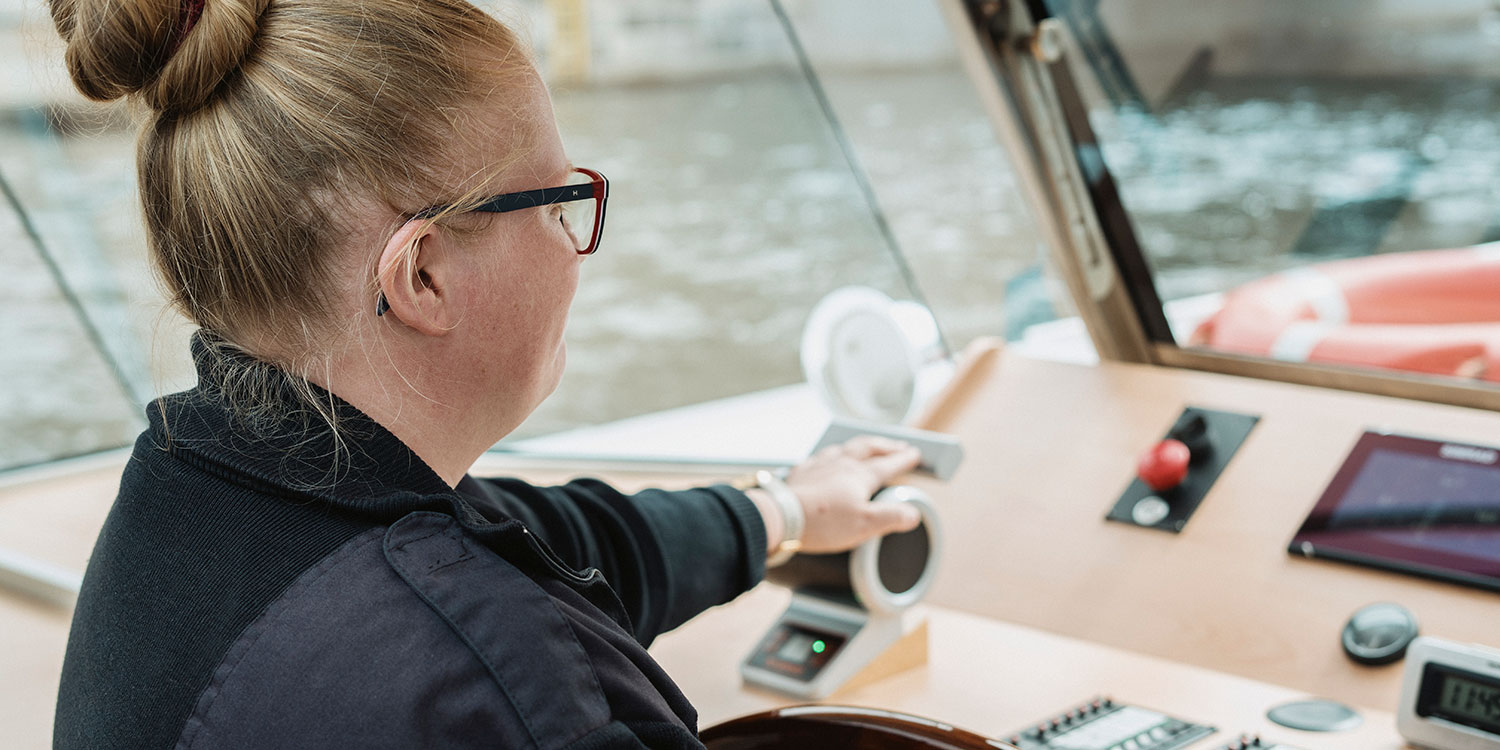 In her eight-hour workday, skipper Stephanie Merkel transports hundreds of passengers along Berlin’s inner-city waterways – and enjoys the fact that “my head is no longer throbbing in the evening.”

Electromobility as a trend

Like many global metropolises, Berlin has been investing in electromobility for years: The buses have become quieter and more climate-friendly, and it’s hard to imagine the cityscape without the ubiquitous electric scooters, hybrid cabs, and fancy electric cars. In the summer of 2022, the first 200 streetlights will be turned into charging stations for electric vehicles – the plan is for thousands more to come soon. The charging stations are becoming part of the streetscape. Only the traffic on the Spree River, the city’s oldest traffic route, lags in its embrace of electromobility. The influential magazine “Der Spiegel” recently wrote about “dirty river rides” in Berlin. But things are changing.

When the Oranje Nassau bumps up against the dock with a thud, André Siebach, the managing director of Berliner Wassertaxi, jumps onto the deck. He has a green sign tucked under his arm, showing a pictogram of a boat with a charging cable next to the slogan: “Ick fahre elektrisch” (I am an electric vehicle). 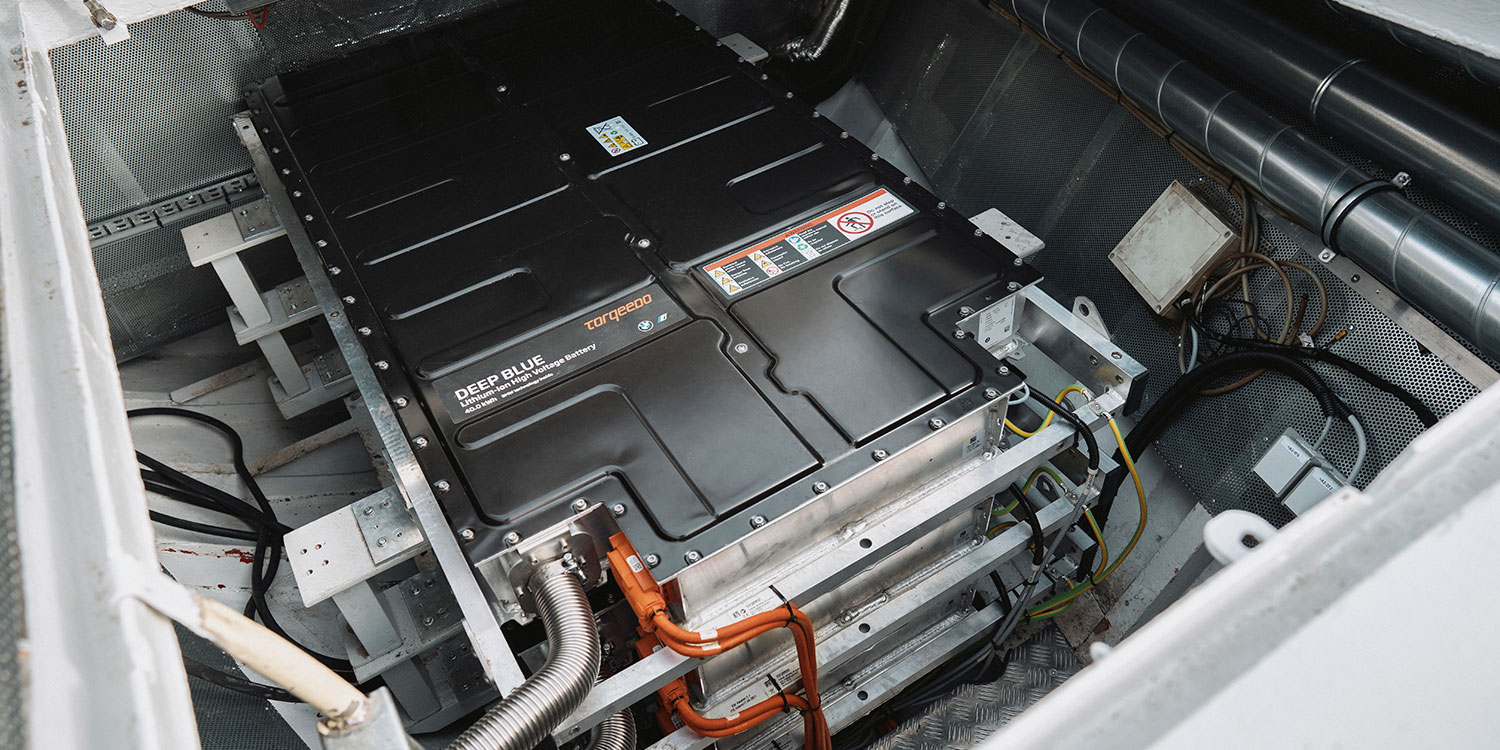 At the bow, a large compartment formerly held the boat’s engine and fuel tanks. Open it today, and all you see are three large black batteries with a total storage capacity of 120 kWh. “This is more than enough energy to travel up and down the Spree River for eight hours at cruising speed,” says Axel Büchling.

Büchling, the project sales manager at Torqeedo, has almost 25 years of experience in marine electrification and has already equipped many ships in Europe with electric drives from Torqeedo – but the Oranje Nassau is a special project for him as well. “It takes a lot of confidence to electrify a large, fossil-fuel-powered boat,” says Büchling. “But the market is undergoing big changes.”

All from one source

There are three reasons why the Oranje Nassau was the city’s first electric canal boat conversion: technology, people, and processes.

From a technological point of view, the Oranje Nassau is a comparatively light and streamlined excursion boat – thus ideally suited to be converted to electric power.

The second reason is André Siebach, a Berlin native and an open-minded guy who sees opportunities rather than problems and is curious to discover what happens when you do things differently. “By converting our first three boats in Berlin, we made a statement: It’s possible!” says Siebach, visibly pleased. If it also means that he is ahead of the competition: even better!

The “downside” of the green revolution: you must tell people what’s great about it for them to realize it.

Third: the process. Managing director Siebach is convinced that “electric mobility is the future of our industry: After all, our boats travel relatively short distances and therefore require not a lot of operating power.” That makes them a perfect fit for electric drive systems. For a long time, however, Siebach recalls, no supplier could deliver engines, batteries, and energy management systems for high-voltage applications. “Any conversion would have been an improvisation, with corresponding risks.”

Torqeedo’s offer to supply all system components from one source and its experience as the global market leader in electrical mobility on the water made it an easy decision.

“It was nice to deal with the same people from the first draft concept to installation,” says Siebach. “I had the phone numbers of all key contacts – and I could reach them anytime.”

The new drive system benefits the climate and the shipping company’s bottom line and improves life for the crew, the passengers, and the city’s residents. “In the past, it was filthy work,” says Stephanie Merkel, the skipper. “You got dirty just from checking the engine in the morning.” Today, Merkel steers the boat wearing a bright red sweater with dark red anchor appliqués and blue leggings. And she tells us that, unlike in the past, her head is no longer throbbing in the evening. When she gently pushes Torqeedo’s grey speed controller forward, you feel the acceleration immediately. But the engine continues to hum quietly.

The passengers, too, are appreciative:

“You could chill out on board,” says Hasanin Ghaidan from Lund, Sweden, who is visiting Berlin with his family. “I saw the ‘electric’ sign before the trip and thought, wow, I’ve never seen that before. It must be something special.”

Viennese photographer Christian Kremsner, another passenger, is impressed as well. “You can absolutely tell the difference,” he says. “The silence is beautiful. Berlin almost has something of the feel of Venice: the silence, the gliding along!” 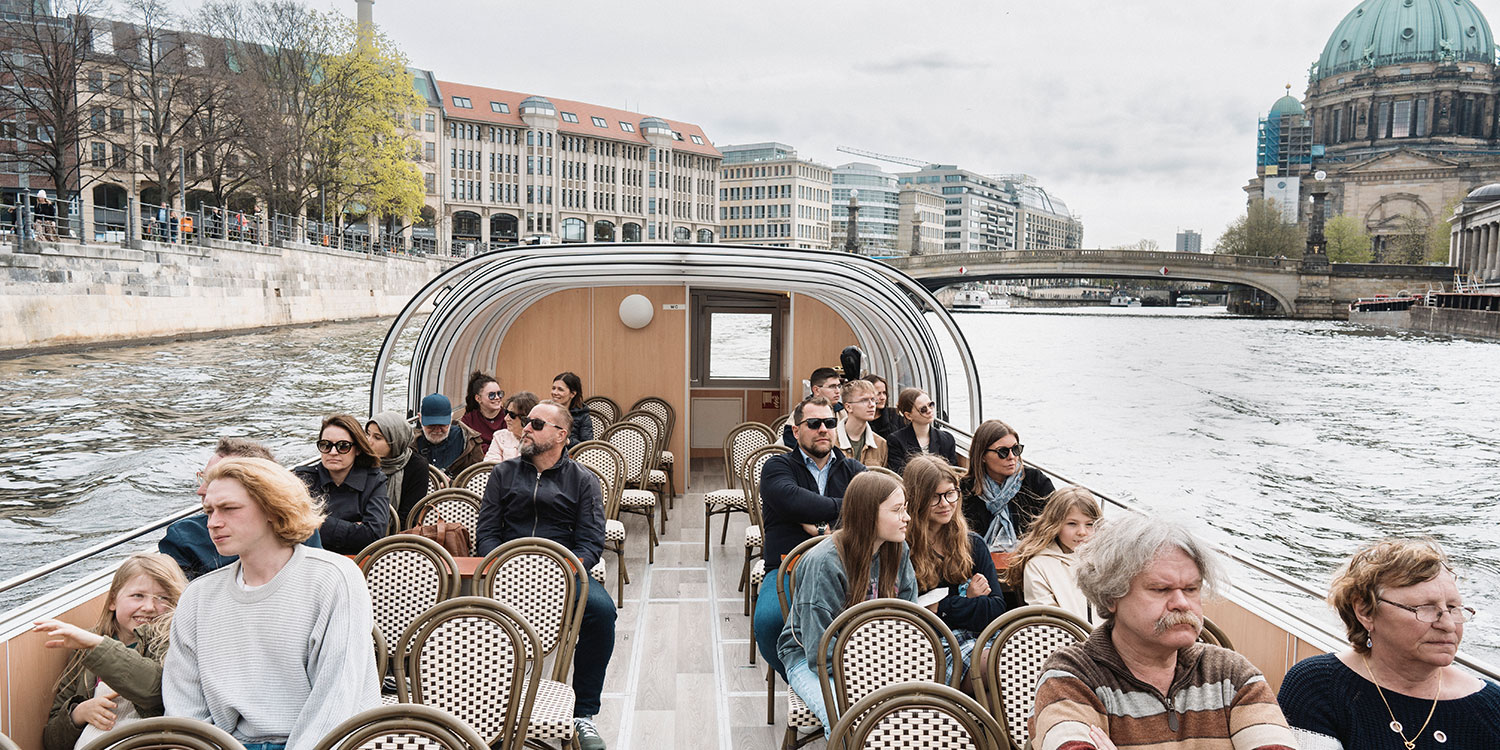 Berlin wants to be ahead of the curve

One hundred boats and forty shipping companies are active on Berlin’s canals; the industry generates a turnover of 200 million euros annually and provides thousands of jobs in Berlin-Brandenburg. Through innovative ideas, Mayor Franziska Giffey recently said, a long-term improvement in the climate on the waterways can be achieved: “Berlin wants to be ahead of the curve.” Back in 2018, the Berlin House of Representatives passed a parliamentary resolution to make shipping in the city less polluting and more sustainable. Since then, subsidies from the state have been available to support electrification projects or retrofitting diesel engines with particulate filters.

In a recent position paper, the Berlin Chamber of Commerce urged the municipality “to better connect and expand the waterways” – even beyond the city. After all, the urban canals can take you from the German capital to the Atlantic Ocean or deep into Eastern Europe.

So, the story of the Oranje Nassau is about much more than the city’s first electric canal boat. It’s a signal for the whole industry: “Forward-looking pioneers are important,” says Axel Büchling from Torqeedo. “Competitors are watching closely. Development picks up very quickly when the market sees that it is working and that the pros outweigh the cons. I expect many water taxis and tour boats will be converted fairly soon.”

A tour onboard the electric Oranje Nassau takes the same time as before the conversion. Heading north from the “Schlossbrücke” stop, the boat drives past the Lustgarten in front of the Altes Museum, passes under the Eiserne Brücke, cruises along the gleaming white entrance area of the Neues Museum designed by David Chipperfield, and then emerges from the narrow Kupfergraben onto the wide Spree River.

But even here, where the bridges over the river are wide and massive and where you sometimes get boat jams in the summer, you suddenly feel much closer to nature and the river. “You can hear the water, the waves, and suddenly...” Siebach pauses and looks around in amazement. “Suddenly, you can also hear the birds.”

Berlin’s ahead of the curve

Cast Away: how and why to fish with an electric outboard