At the AkerBP Offshore platform in Norway a new freefall lifeboat with Torqeedo electric engines will lower costs and enhance safety.

Torqeedo provided the integrated propulsion system for the world’s first electric-powered freefall lifeboat, which is being built by the Dutch builder Verhoef. The vessel recently passed its final drop tests, making it the first fully functional electric lifeboat in the world.

The first of the new Verhoef aluminum 32-passenger lifeboats will be deployed on an offshore platform in the new Valhall Flank West oilfield project in Norway. The contract includes an option for similar lifeboats in the future.

The rugged system is designed to withstand the heavy g forces of freefall launch and provide 30 minutes at full speed, followed by 10 additional hours at 50 percent of maximum speed. The electric system also includes an inverter to drive a water spray pump, which is a requirement in case the craft drives through burning oil on the water’s surface.

One of the primary motivations behind the switch to electric power is to reduce the high maintenance costs of diesel engines currently in use, according to Verhoef. Experience has shown that diesel lifeboat engines require a great deal of ongoing maintenance and repairs. Soot accumulation in the seldom-run engines can cause internal damage and negatively affect the performance and reliability of the evacuation system. Electric propulsion also eliminates the need to transport, store and handle diesel fuel on the platform. 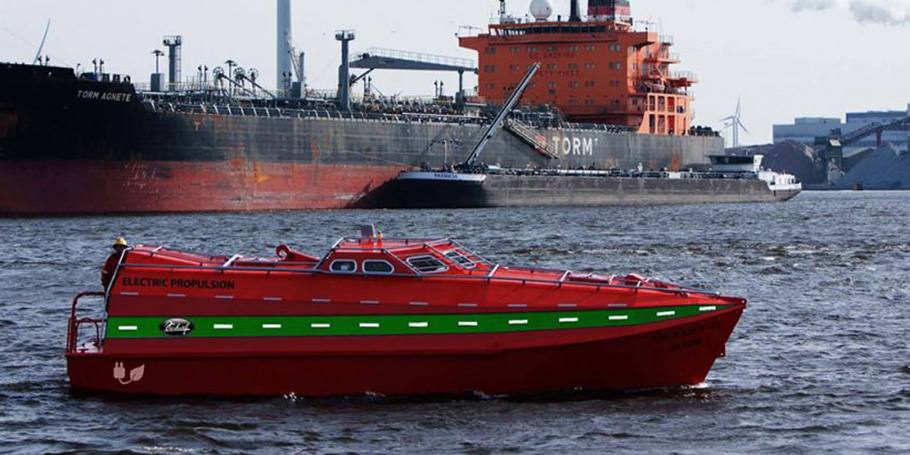 Verhoef estimates that the electric propulsion system will reduce operating costs by about 90-95 percent compared to combustion-powered lifeboats. The built-in connectivity function will enable remote monitoring of the condition of the electric system from shore. The system also comes with a nine-year battery capacity warranty.

“This challenging project is an important validation of the ruggedness, resiliency and performance of our integrated marine electric propulsion technology,” said Dr. Christoph Ballin, co-founder and CEO of Torqeedo GmbH. “These lifeboats must be ready to launch in an emergency at any time of day or night, capable of surviving the shock and vibration of a launch from a high platform, and bring passengers to safety. Torqeedo has demonstrated we are up to the task.” Verhoef CEO Martin Verhoef commented: “This is what the industry has been waiting for to reduce their OPEX and carbon footprint. We are convinced that electric propulsion will be the wave of the future for lifeboat technology. While we are focusing initially on applications like oil platforms, which have shorter distances to travel to reach shore, we believe this technology will also ultimately transform the shipping and cruise industry as well.”

A lifeboat for the 21st century

Whispers of the waves

And the Innovation Award goes to …