People have always found inspiration in beautiful places. Yann Herriot, founder of Orphie Boats, is no exception. He grew up in Hyères, a small port on the Côte d'Azur. The town includes a nature reserve that forms three points on the map at the southernmost tip of the French Riviera – the Îles d'Hyères, which the locals call the Îles d'Or ("Islands of Gold") because of the shimmering golden cliffs.

It is no exaggeration to say that Orphie Boats would probably never have been founded without these islands. "I thought for a long time about how I could share my passion for this place with as many people as possible," says Herriot. So, a little over two years ago, he came up with a plan to build a boat that was as quiet and relaxed as a sailboat but offered the same flexibility and ease of use of a powerboat. At the same time, it had to be possible to use it in sensitive ecosystems such as the Îles d'Or without harming the natural environment in any way. Since May of this year, this boat has been a reality – and if all goes according to plan, Orphie Boats could change near-shore boating worldwide.

The Orphie 29 is an elegant, nearly nine-meter electric trimaran that can accommodate up to ten people. The boat is powered by a 50 kW Torqeedo Deep Blue outboard with a 40 kWh BMW i3 high-performance lithium battery, which provides enough energy for a range of up to 30 nautical miles (approx. 55 km). The narrow center hull houses a cabin, a toilet, a low double berth, and a fridge. Two comfortably large trampolines provide space for relaxing. A carbon plywood T-top provides shade for the dining area. "In many details, we tried to think in a fundamentally new way," Herriot says. For example, the table in the dining area can be stored in the T-top, which is also covered with solar panels to power the thruster and refrigerator to conserve battery power. "The idea is that a day on the Orphie 29 should be the one day you remember from the summer," Herriot says of the feeling aboard the trimaran.

In addition to a novel boat design, Herriot has also developed an innovative sales concept. The Orphie 29 is a turnkey charter boat with all the associated services ranging from maintenance and training to a digital platform for marketing and bookings. The potential customers are day charter providers, hotels, or boat clubs that would like to rent the Orphie 29 for day trips. The first boat, which has been in operation since July, is being used by Riding Watt and the catamaran charterer Philisa Apaca in Hyères. 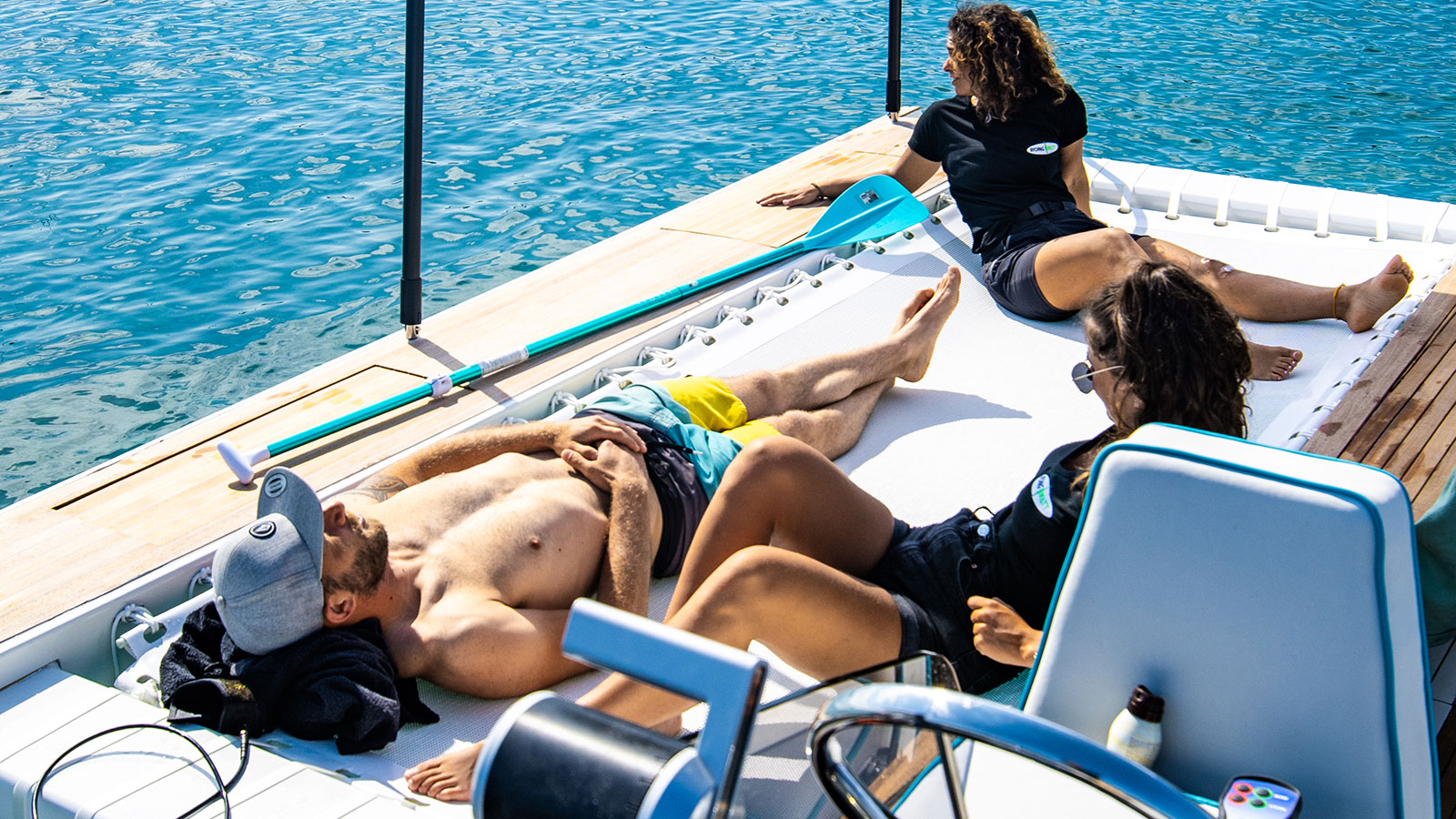 The trimaran, which is just under nine meters long, has room for ten people. The thruster and refrigerator are powered by the solar panels on the roof. (Credit: Orphie Boats)

"The Orphie 29 was designed for commercial use," says Herriot. This orientation also significantly influenced the design, especially the use of materials. "A key aspect was the decision to build the boat out of plywood," says Herriot. This offers a whole range of advantages. For one thing, the starting material is already much more sustainable than the plastic used in conventional boats, and the boat is also much easier to repair and maintain. While plastic becomes brittle and discolored over time, the Orphie 29 can be easily repaired with new wood and some resin. "We want our boats to be in use, if possible, every day and still look nice after 5-10 years," Herriot says. Another advantage is that building with plywood gives Orphie Boats a great deal of flexibility for all future models because the plywood panels are precisely cut to size using a 3D digital model and assembled. "This makes our approach incredibly innovation-friendly," says Herriot. "If we want to incorporate a new or improved feature, all we have to do is adjust the 3D model." In a young industry like waterborne electromobility, Herriot believes this feature is hugely important. Last but not least, assembling the modules is comparatively easy so even smaller shipyards can build an Orphie 29. "We can manufacture our boats locally rather than having a centralized manufacturing facility in Europe and shipping boats all over the world," says Herriot. 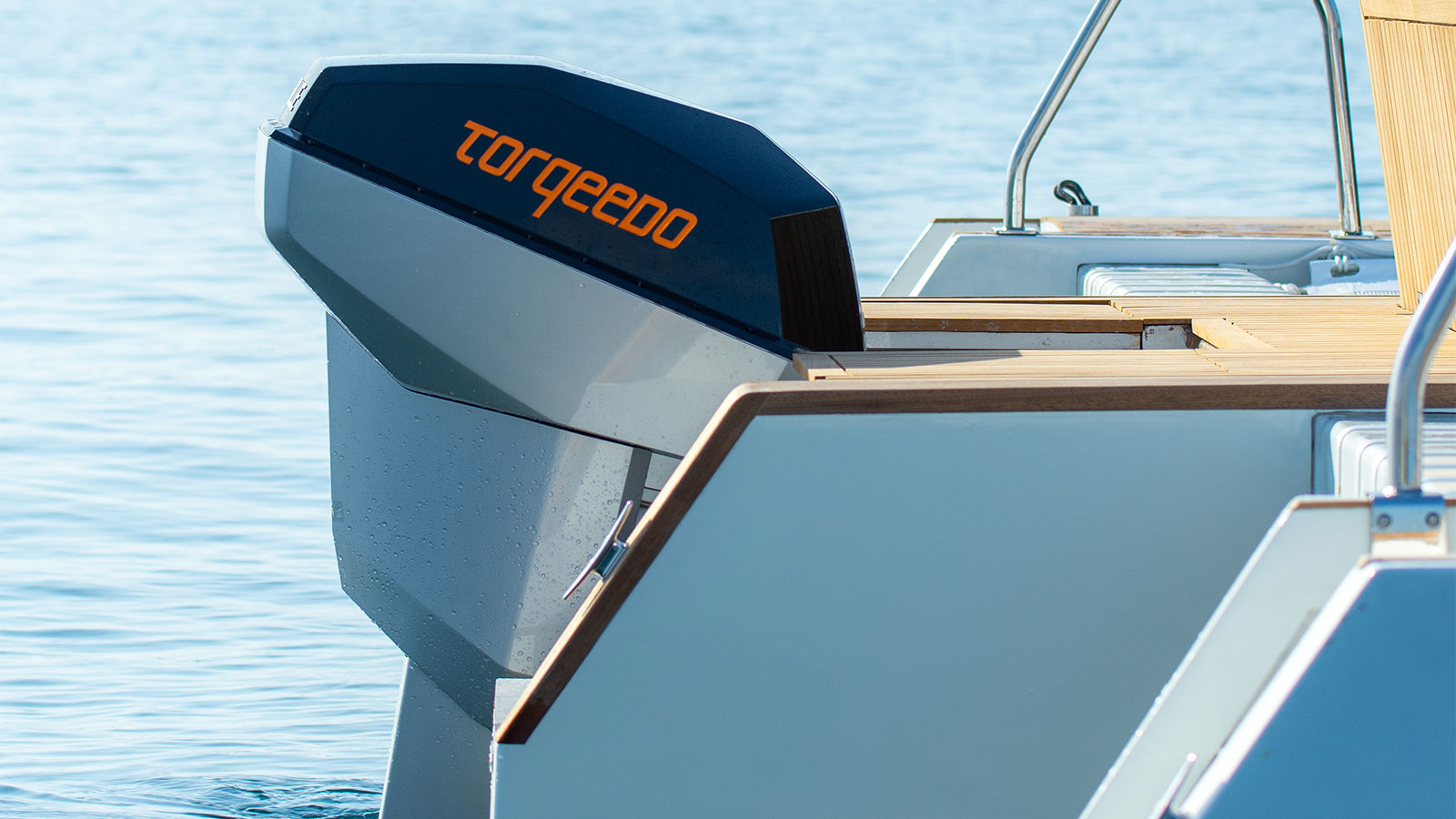 Torqeedo's electric motor was incorporated into the design of the trimaran. This resulted in the first commercial all-electric day charter for use on the open ocean. (Credit: Orphie Boats)

"Developing the Orphie 29 was a great challenge," says Jeremy Benichou, the Global Account Manager at Torqeedo managing the project over the past two years. "We were involved in the design process right from the beginning and worked together to find the best solutions," says Benichou. "This allowed us to find a design that was consistently focused on electric propulsion." After all, the shape of the trimaran was not chosen simply because it looks elegant. "We quickly realized that a trimaran was the logical choice for an electric boat," says Herriot. Unlike a conventional monohull, the multihull design has the advantage of not only being lighter, but also much more efficient due to lower thrust resistance. What was also clear to Herriot early on was that he would use a drive system from Torqeedo. "The Orphie 29 is all about having a relaxing day on the water," says Herriot. "So, it was hugely important to us that the technology on board was reliable and easy to use." Another concern on his mind was safety. "The fact that Torqeedo's batteries are equipped with automotive-grade safety technology gave me great peace of mind," says Herriot.

"Orphie Boats has accomplished something previously thought impossible," Benichou says. "Designing a completely electric day charter for commercial use on the open sea." Herriot says the response from customers so far has been very good, with day guests especially enthusiastic. "A lot of them forget during the day that our trimaran is fully electric," Herriot says. "Then they suddenly realize you can have such a great day without pollution and noise." Herriot is planning to build three more boats this year and to expand his operations to the West Indies for the winter season so that as many people as possible can experience his beloved sea – without polluting the environment.

Find high-resolution renderings and video presentation at the:   › Torqeedo Dropbox

Release of the new Zodiac eOPEN powered by Torqeedo range